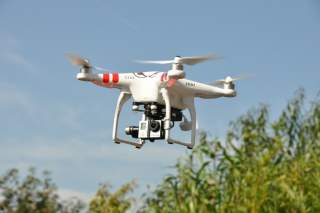 Drone sales in the United States are exploding. Hobbyists and enthusiasts are embracing these small Unmanned Aircraft Systems (UAS) in droves. Entrepreneurs and innovators see boundless applications for drone technology—from rapid parcel service to infrastructure inspection to the delivery of life-saving medications to first responders.

Yet bureaucrats in the FAA see only impending disaster. For years, the agency has imposed a virtual ban on commercial drone operations, depriving Americans of all the benefits of drone technology in the name of protecting us from a hypothetical worst-case scenario.

The only way for would-be commercial operators to get to market is a “Section 333” waiver: a special exemption from the blanket ban for which individual businesses may apply, and which is granted on a case-by-case basis. Reviewing those applications takes months. In two years, the agency has managed to approve only 5,361 petitions; 7,600 applications are awaiting review. The process puts the FAA right where it wants to be: in the driver’s seat, in terms of controlling a nascent and rapidly evolving industry.

And unfortunately, the agency’s new “Part 107” commercial drone regulations—intended to replace the Section 333 exemption process and normalize commercial drone operations—will keep it there.

Under the new rules, the FAA will permit commercial UAS operations only if the drone weighs under fifty-five pounds, is flown during daylight hours, and always remains below 400 feet and within the line of sight of the operator. An operator cannot fly more than one drone at a time and cannot rely on onboard cameras or sensors to satisfy the requirement that he/she is able to see and avoid obstacles.

Further, the operators themselves must be vetted by the TSA and earn a remote pilot certificate by passing an aeronautical knowledge exam, which must be renewed every two years. If an operator isn’t already a licensed pilot, he must take the test in person at an FAA facility.

In total, operators must comply with 624 pages of new regulations simply to, say, photograph a wedding using a drone.

Some of the FAA’s rules—the limits on maximum altitude, for example—make sense. After all, despite there being no confirmed instance of a collision between an unmanned drone and a manned aircraft, and the fact that the odds of such an incident damaging the aircraft are vanishingly slim, it makes sense to keep small drones out of the airspace dedicated for manned aviation, or contained to a specific pocket of that airspace. Such prohibitions would preserve aviation safety without compromising the usefulness of drones.

But others, such as the “one drone, one pilot” rule, the requirement that drones can only fly within visual line of sight, and the ban on night flying, will constrain an entire industry. Amazon cannot develop its ambitious Prime Air package delivery service under such conditions. Myriad other publicly beneficial uses for drones—from search-and-rescue operations to disaster relief—will be impossible or, at the very least, significantly curtailed by the FAA’s rules.

Many drone technology developers have chafed at the limitations imposed by these hyper-cautious federal rules. Amazon and Google, for example, have gone abroad to develop drone-delivery technology. The FAA has responded to this criticism with a reminder that once Part 107 goes into effect, operators can still apply for Section 333 waivers if their desired operation exceeds the limits imposed by Part 107.

But this safety valve entirely misses the point. Companies won’t spend the time and resources necessary to build complex systems that can be used only on the whim of a federal bureaucrat. Government regulators shouldn’t be in a position to pick, via an arbitrary and opaque process, which technologies will be developed and which innovations will be permitted. Not only does this invite cronyism and favor big firms with deep pockets; it is premised on the unreasonable assumption that companies and innovators will rush inherently unsafe products and systems to market.

The reality is just the opposite. Look at how Tesla Motors is rolling out its “autopilot” self-driving feature. Far from selling drivers on dubious claims that they can sit back and tune out during the morning commute, Tesla has made it clear that its software is in beta, requires driver engagement and even went so far as to program the car to stop if motorists take their hands off the wheel for too long.

Tesla’s approach is not the exception, but the rule. Brand-conscious companies will likely be highly cautious in rolling out cutting-edge new drone technologies, fully aware that an early debacle could ruin their efforts to win over public faith in their new services.

Secretary of Transportation Anthony Foxx called the new rules the beginning of a “new era in aviation.” The FAA itself touts the new regulations as working “to harness new innovation safely, to spur job growth, advance critical scientific research and save lives.”

If it serious about achieving these goals, the FAA should revise Part 107 to eliminate micromanagerial provisions that compel drone developers to innovate only in a manner and on a timeline approved by the government. Until it does so, federal regulators will deprive Americans of countless revolutionary uses for drone technology, while other countries take the lead.

Jason Snead is a policy analyst in the Edwin Meese III Center for Legal and Judicial Studies at The Heritage Foundation.