Washington Can’t Treat Russia as It Does North Korea 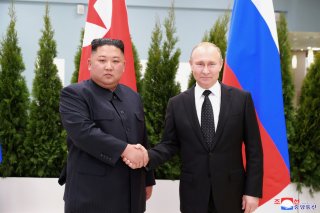 U.S. policy with respect to the war in Ukraine is characterized by excessive emotionalism and stridency. Indeed, the hostility toward Russia has reached toxic levels. The Biden administration has embarked on a crusade to enlist its allies in Europe and East Asia to form a solid bloc dedicated to imposing severe sanctions on Russia and assisting Ukraine’s defense with shipments of sophisticated weaponry. U.S. officials also are pressuring governments throughout the international community to cooperate in waging economic warfare against Moscow.

Washington and its NATO partners seem almost indifferent to the adverse impact of their punitive measures on the Russian people or on the global economy. Worse, their strategy does not appear to have an identifiable endpoint. Neither Biden nor any other administration official has tried to define what would constitute “success.” U.S. and NATO leaders have not clarified whether sanctions will be lifted (or even eased) if Russia withdraws its invasion force from Ukraine. There is no indication that the West’s economic war against Russia would cease even if Kyiv and Moscow concluded a peace agreement. The Biden administration actually appears to be pressuring Ukrainian president Volodymyr Zelenskyy not to make concessions. State Department spokesman Ned Price emphasized that the war is “bigger” than Russia and Ukraine. “The key point is that there are principles that are at stake here that have universal applicability everywhere.”

The implication in U.S. and NATO policy statements is that the punitive approach will continue indefinitely unless Russia capitulates. Indeed, given Biden’s recent accusation that Vladimir Putin is a war criminal, it seems likely that nothing short of Putin’s ouster would slake the Western thirst for retribution.

Such an attitude is profoundly unwise. Insistence on Russia’s capitulation and humiliation virtually guarantee that the war in Ukraine will continue to rage on, causing a rising toll of casualties on both sides. The Kremlin will have little incentive to reach a compromise peace if there are no significant benefits to be gained. Conversely, a promise that Russia’s international and political status will be restored as soon as the fighting ends would create an inducement for Moscow to compromise and seek an early truce. That is especially true since the invasion has proven to be a much slower and more costly slog than Russian leaders anticipated.

Beyond considerations about ending the tragic Ukraine conflict sooner rather than later, there is another compelling reason for the United States and its allies to adopt a more flexible and conciliatory approach. Pursuing a strategy of isolating Russia diplomatically and economically over the long term amounts to trying to replicate the U.S.-led policy toward North Korea that has produced decidedly unsatisfactory results.

Frankly, it has been myopic and counterproductive even to treat North Korea like North Korea. Isolating a country that is gradually, but successfully, developing a small nuclear arsenal and an effective delivery system is extremely dangerous. North Korea’s new test launch of a missile that apparently has sufficient range to reach the U.S. mainland is the latest evidence that the isolation strategy is not working. Applying the same rigid, misguided approach to a country that is one of the world’s major powers and already possesses several thousand nuclear weapons would be much worse. However angry they might be, the United States and its allies must not seek to treat Russia as an international pariah.

The good news is that even making such an attempt is almost certain to fail. U.S. and other Western leaders already are reacting with disappointment and annoyance because other important countries, such as China, India, and South Africa, declined to join the anti-Russia crusade. Some of them have even refrained from explicitly condemning Russia’s invasion. When it comes to implementing tangible sanctions, the resistance is far stronger and more pervasive. Hudson Institute scholar Walter Russell Mead provides an apt summary of the sharply differing responses:

As the consequences of the Russian-Ukrainian war ricochet through global politics, the West has never been more closely aligned. It has also rarely been more alone. Allies in the North Atlantic Treaty Organization plus Australia and Japan are united in revulsion against Vladimir Putin’s war and are cooperating with the most sweeping sanctions since World War II. The rest of the world, not so much.

U.S. and NATO leaders need to take a deep breath and develop a strategy to restore the West’s relations with Russia to normal as soon as possible. That modification may need to include easing some sanctions even before the fighting in Ukraine comes to an end. Above all, NATO governments must convey a message to the Kremlin that the West’s long-term strategy does not amount to Cold War 2.0. Such a myopic, confrontational approach would not only do lasting damage to the global economy, it would significantly increase the chances of a catastrophic military collision. Like it or not, Russia is—and will continue to be—a major player in the international system. It is not feasible to treat it like the West does North Korea.