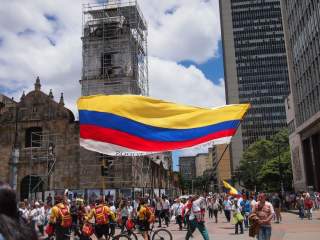 For fifty years, the Colombian government has been locked in armed conflict with the Revolutionary Armed Forces of Colombia, known as FARC. But for the last four years Bogotá and its nemesis, an internationally recognized narco-terrorist group, have been engaged in peace talks as well.

With the deadline fast approaching, the two parties have agreed to finalize a peace agreement on March 23. But before that happens, President Barack Obama will host a February 4 “official working visit” with Colombian President Juan Manuel Santos at the White House.

For the United States, both the terms of the peace agreement and the way it’s implemented are extremely important. Colombia is a U.S. ally. It is also the largest recipient of U.S. foreign aid in the Western Hemisphere. Over the last two decades, the United States supported Colombia’s development and security with a $10 billion aid package known as “Plan Colombia.” In that time, Colombia went from verging on “failed state” status to becoming a stable democracy, a regional leader in police and military training, an economic powerhouse and a member of the region’s largest free-market trade bloc—the Pacific Alliance.

A successful peace plan is even more important to Colombia. Fifty years of conflict have left up to 260,000 people dead and displaced an additional five to six million Colombians. Only the conflict in Syria has created more displaced persons. Minefields have killed or maimed eleven thousand in the last fifteen years alone, and active minefields still litter the rural areas.

Initially, FARC started off as a Marxist insurgency in the 1960s. Funded largely by the cultivation of coca and trafficking of cocaine, the drug trade has sustained the group’s brutal war against the Colombian government. In 2014, Forbes Magazine ranked them as the third richest terrorist group, only behind the Islamic State and Hamas. The Colombian government estimates FARC revenues from drug trafficking at $2.4 to $3.5 billion annually.

Presidents Obama and Santos may well wish to celebrate the conclusion of the peace talks. But first they should address the pitfalls of the agreement.

For starters, the deal made on “transitional justice” is evolving into a de facto amnesty for FARC terrorists. It provides that anyone confessing to “political” crimes would be pardoned. Colombia’s Supreme Court of Justice has already stated that acts of drug trafficking will fall under that category. Confessions for other serious crimes—like murder, recruitment of child soldiers and kidnapping—will lead to minor deprivation of liberty, but not jail time.

It appears as though this extraordinarily lenient policy will be extended to FARC members wanted in the United States, as well. In an unprecedented move last December, President Santos declined to extradite a FARC rebel wanted in New York on drug trafficking charges. Currently, the U.S. Department of Justice has pending extradition orders for sixty members of FARC. Considering FARC’s violent opposition to extradition, the rebels might never face justice in American courtrooms.

U.S.-led offensives against FARC narcotics operations have declined throughout the peace-negotiation process. Colombia has ended aerial coca field spraying, a linchpin of eradication programs. Coca crop eradication will now be a voluntary process, left fully up to the local communities. Considering that Colombia has reclaimed its title as the world’s number one coca-producing country, both heads of state ought to urgently address this matter.

President Santos has declared he will also ask Washington to remove FARC’s designation as a Foreign Terrorist Organization (FTO). Such a move now would be very much premature. Yet the fact that Santos announced this intention publicly raises concerns that the White House may have already agreed to take this step. Perhaps the idea is to expedite a diversion of U.S. foreign aid to help in demobilizing FARC. If so, there’s no need for haste. It took the U.S. government more than eight years to delist the United Self-Defense Forces of Colombia (AUC) after they demobilized, and that was a much smaller outfit than FARC.

Colombia entered into peace talks with the premise that FARC had been militarily defeated. Granted, in conventional terms, FARC does not possess the capacity to undermine the Colombian government like it once did. But many argue that FARC’s interests in drug trafficking have long outweighed its political goals. Moreover, FARC is now a fractured entity, with a minimal command authority. Ambassador Roger Noriega of the American Enterprise Institute reports: “Colombia’s military intelligence found that, of FARC’s 67 fronts throughout the country, only 15 were strictly following orders from central command.” Despite what FARC’s central command might claim, convincing all members of the organization to demobilize and give up their lucrative drug trade will be no easy matter.

Polling consistently shows that Colombians are supportive of the prospect of peace, but after experiencing failed negotiations in 1984, 1991 and 1998, they are naturally wary of FARC laying down its arms this time.

The conciliatory nature of the Santos administration has not provided much reassurance. From the outset, the peace talks have been fraught with problems. As was the case in previous negotiations, FARC has routinely violated ceasefires, kept planting mines and never halted its drug trafficking. Last April, it went so far as to slaughter eleven Colombian soldiers in their sleep. Yet despite all this, Santos has consistently portrayed critics of the talks as opponents of peace.

As it stands, the current deal is deeply flawed. But there is still time to get it back on track. Considering the generous, unwavering support the United States has shown Colombia over the last two decades, President Obama should be able to exert some influence on the agreement. He should urge President Santos to address the deal’s glaring weaknesses. Lasting peace cannot possibly be attained through an agreement that promotes impunity and leaves the door open for continued drug trafficking.