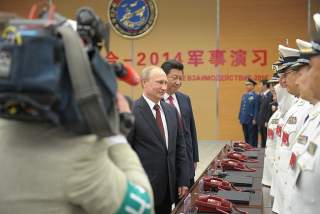 In June, I participated in a seminar called “The Dynamic of Trilateral Relations among Russia, China, and the United States in the Context of the Ukrainian Crisis and Western Sanctions against Russia” in China itself. The participants supported the assertion—frequently repeated by Russian and Chinese leaders—that relations between Russia and China have never been friendlier. Indeed, despite the fact that U.S. imposed sanctions on Russia do not directly affect China, Beijing is keenly aware of U.S. policies directed at containing it. The United States has unequivocally stated its support for China’s opponents in a series of conflicts concerning Chinese-Japanese, Chinese-Filipino, and Chinese-Korean squabbles. In addition, the American pivot to Asia has as its primary objective to preserve the status quo in Asia and contain a rising China.

Despite internal concerns in both Russia and China that prevent both countries from announcing loudly and decidedly their support for each other—as was in the case of China’s restraint in recognizing the independence of Abkhazia and South Ossetia or the reincorporation of Crimea, and as in the reciprocal case when Russia has not voiced outright support for China in Chinese territorial disputes with neighbors—the two countries act as allies on a host of issues in world politics. These issues include stabilizing Syria, the Iranian nuclear program, U.S. regime change around the world, and the hard attempts of the United States to interfere in Chinese and Russian internal affairs masked as support for human rights. Russian-Chinese relations are entering a qualitatively new stage. They are more than merely partnership relations, but are not quite those of allies. However, it is entirely possible that increasing U.S. sanctions on Russia and attempts to contain China will push the two countries into a full-blown alliance.

The present situation in trilateral U.S.-Chinese-Russian relations is at odds with the strategy articulated by Henry Kissinger during the Nixon Administration, which held that American relations with either Russia or China had to be substantially better than the bilateral relations between Russia and China themselves. Today the opposite is occurring. U.S. relations with either of the other two countries are considerably worse than bilateral Russia-China relations. Therefore, the potential for America pitting one against the other is decidedly smaller than the potential of the two countries uniting their efforts and resources to oppose American pressure in the spheres each country considers most sensitive.

In both the U.S. and in Russian liberal circles, it is not uncommon to hear the tired assertions that further rapprochement between Russia and China will render Russia a junior partner in the Russo-Chinese relationship and that Russia should keep this in mind when choosing between China and the West. I believe such pronouncements stem more from their authors’ ideological convictions than from real political facts. They are meant to scare Moscow and to cow it into avoiding the strategic alliance with a growing China that is asserting its interests against the status quo in the face of American containment, particularly in the Asia-Pacific region, where it faces conflicts with virtually all of its neighbors—Japan, the Philippines, South Korea, Vietnam, India—and needs an alliance with Russia, with whom it lacks any potential conflicts in the foreseeable future.

In talking about the threat of Moscow becoming Beijing’s junior partner, and in pressuring Moscow to choose the West over China, our Western partners have never articulated their vision of Russia in the world, the character of Russian relations with the West and especially with the United States. We are, of course, grateful to our Western partners for their espoused worry that Russia may “inadvertently” become a junior partner to China. But they have never articulated the place of Russia in the Western world, particularly in the Western economic and security frameworks. Since the 1990s, Western, and especially American, policy towards Russia followed a clear line according to which Moscow was to be treated as a whipping boy. Since the collapse of the USSR, the United States has not once, in words or deeds, demonstrated its readiness for an equal partnership with Russia. And by the way, in the context of the Ukrainian crisis, the West, and U.S. politicians and military officials, hurried to place Russia not in the role of a partner, but that of an adversary, which, in their understanding, is practically indistinguishable from that of an enemy.

Recently, various analysts have been busy using statistics to prove yet another unsubstantiated claim frequently invoked to discourage Russo-Chinese relations, namely, the alleged prospect of large Chinese populations pouring into Siberia and the Far East, thereby presenting a threat to Russia’s territorial integrity. As we can see from migratory tendencies in the northern border regions of China, the vast majority of migrants flock not to Russia’s Siberia and the Far East, but rather to the central regions of China and the new large cities, where lifestyle conditions are more comfortable. And, thanks to China’s demographic policies during last decades, the population in the border regions close to Russia is projected to decline rather than grow.

In the foreseeable future, Russia has plenty of space for maneuver in its relations with China. Russia’s next steps with regard to Beijing will largely depend on Washington’s readiness to impose tougher sanctions because of Ukraine. Russo-Chinese relations have great potential for development. We cannot exclude the possibility that Russia and China will enter into a military-political alliance that can shift the global balance of power. The military, technological, and resource potential of Russia propped up by the economic and colossal labor resources of China would allow the two countries to make decisions on many global issues in a way that would rattle the current balance of power in international relations.

Apparently, there is some sort of instinctive understanding of this in Washington, which is why the U.S. is not pushing Japan to adopt strict sanctions against Russia. Should Japan impose such sanctions, Prime Minister Shinzo Abe would have to forget his ambition to solve the question of the “Northern territories” in his relations with Russia, as he might force Russia’s hand in supporting China’s claim over the contentious Senkaku islands.

A potential alliance of Russia and China can present many new and unexpected developments for both Washington and Brussels in economic and military-political relations.

Today, there are many politicians and analysts in Washington who, on the one hand, desperately thirst to punish Russia and China, and on the other, consciously or not, avoid calculating the consequences of their actions and remain blind to the real preconditions for a closer partnership between Russia and China on all leading global problems. A continued refusal to contemplate such a partnership could have profound consequences for the U.S. foreign policy.

Andranik Migranyan is the director of the Institute for Democracy and Cooperation in New York, which works closely with the Russian Presidential administration.