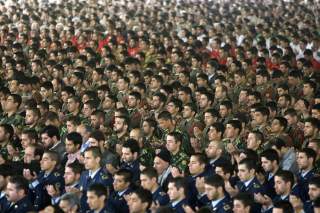 Lebanese fighters, who lacked America's long-range firepower, found another way to strike back. As Colin Powell later explained, “When the shells started falling on the Shiites, they assumed the American ‘referee’ had taken sides against them. And since they could not reach the battleship, they found a more vulnerable target: the exposed Marines at the airport.” Furthermore, one Pentagon commission called the attack “tantamount to an act of war using the medium of terrorism.”

The Marines did not deserve to die. However, the most important cause of their deaths was not terrorism, Hezbollah, Iran, or even the Islamic Jihad Organization. It was the U.S. government turning them into combatants in another nation’s impossibly bitter and complicated civil war. Indeed, after the bombing, even Reagan came to realize that making Lebanon’s fight America’s fight was a huge mistake, and he withdrew American forces. Today, continuing to blame Iran might allow U.S. officials to shirk responsibility for their errors— but it does nothing to make the region more stable or peaceful.

Tehran is a malign actor in the Middle East, but so are Saudi Arabia, the UAE, Egypt, Bahrain, Turkey, and Iraq. Instead of treating Iran as the locus of all evil, Washington needs to develop a more balanced policy for the region. That includes acknowledging how America has dramatically contributed to the Mideast’s problems, including with Iran.