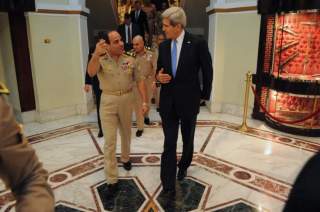 Whatever enthusiasm the Obama administration may have once had for the democratic upheavals of the Arab Spring has virtually disappeared. That point was underscored with Secretary of State John Kerry’s just-completed meetings with Egyptian strongman Abdel Fattah el-Sisi. The administration’s decision to deliver a shipment of F-16 fighter planes to Cairo on the eve of Kerry’s trip further emphasized that Washington’s affections lie with Egypt’s military autocrats, not the supporters of Mohamed Morsi, the elected president Sisi and his fellow generals deposed and imprisoned.

The Obama administration’s Egypt policy is a microcosm of a troubling pattern in U.S. foreign policy. At least with respect to the Third World, throughout both the Cold War and the so-called war on terror, U.S. policy makers seem to prefer compliant autocrats to feisty, unpredictable democratic leaders.

The relationship with Egypt reflects that long-standing policy. Washington regarded that country’s dictator, Hosni Mubarak, as a crucial ally for more than three decades, despite his regime’s corruption and brutality. Indeed, U.S. leaders were reluctant to cut Mubarak loose, even as pro-democracy demonstrations in Cairo’s Tahrir Square and elsewhere surged in 2011. In a PBS interview, Vice President Joe Biden even objected to describing Mubarak as a dictator and spurned calls for him to step down. Similar sentiments were evident after Sisi led his coup against Morsi. Obama administration officials steadfastly refused to describe the action as a coup. Yet if the military overthrow of an elected government didn’t constitute a coup, one has to wonder when that term would ever apply.

Unfortunately, the enthusiasm for Sisi appears to be a bipartisan folly. During the recent prime time televised debate of GOP presidential candidates, Texas senator Ted Cruz heaped praise on the Egyptian autocrat for confronting Islamic radicals.

The U.S. fondness for supposedly friendly dictators is not confined to policy toward Egypt. The U.S. Central Intelligence Agency helped overthrow Iran’s elected prime minister, Mohammed Mossadegh, in 1953 and restore the Shah to power as an unconstrained monarch. U.S. leaders repeatedly fawned over the Shah as a great friend of the United States. Perhaps the most sickening example came from President Jimmy Carter in a toast during a state visit to Tehran on New Year’s Eve 1977. “Iran, because of the great leadership of the Shah, is an island of stability in one of the more troubled regions of the world. This is a great tribute to you, Your Majesty, and to your leadership and to the respect and the admiration and love which your people give to you,” Carter gushed. Apparently concluding that America’s vocal enthusiasm for the Shah and his policies during the previous quarter century did not link the United States sufficiently to his conduct, the president emphasized: “We have no other nation on earth who [sic] is closer to us in planning for our mutual military security.” But according to Carter, the United States and Iran shared more than security interests. “The cause of human rights is one that also is shared deeply by our people and by the leaders of our two nations.” Yet Amnesty International and other groups had already documented the Shah’s systematic violations of human rights. And barely a year after Carter’s effusive toast, the regime of the Shah that Iranian people supposedly respected, admired and loved was in ruins, with the ousted monarch fleeing into exile.

The enthusiasm for corrupt, thuggish autocrats has been a bipartisan phenomenon. A few years after Carter’s astonishing toast to the Shah, Vice President George H. W. Bush engaged in similar behavior toward Philippine leader Ferdinand Marcos. Bush emphasized the U.S. government’s respect and admiration for Marcos: “We stand with you sir . . . . We love your adherence to democratic principle and to the democratic processes.” The reality was that the Philippines strongman had been a full-fledged dictator since his imposition of martial law in 1972, and he had displayed pronounced authoritarian tendencies and practices for several years before that official proclamation. His rule was also so astonishingly corrupt that it nearly destroyed the Philippines’ economy.

Washington’s preference for cooperative authoritarians instead of the uncertainty of democracy among Third World allies and client states was evident in the staunch support for a series of South Korean dictators, including Syngman Rhee in the 1950s and Park Chung Hee in the 1960s and 1970s. But the most notorious example came in 1980 when another military coup overthrew a civilian government that had briefly emerged following Park’s assassination. Younger Koreans were especially inclined to place much of the blame for the latest coup on the United States. General John Wickham, the commander of U.S. forces in South Korea, fanned such suspicions when he stated that Koreans were “lemming-like” and “needed a strong leader.” The evidence suggests that Washington’s flirtation with friendly dictators has not paid off. It is a myopic policy that betrays America’s professed political values for short-term, and often illusory, gains. Embracing friendly dictators risks nasty blowback when oppressed populations blame Washington for propping up the tyrants that have looted and brutalized their countries. Such consequences are most evident in places like Nicaragua and Iran. Washington’s cozy ties to the Somoza family that dominated Nicaragua for more than four decades led to the virulently anti-U.S. Sandinista regime of Daniel Ortega. The situation in Iran is even worse. One cannot grasp the vehemence and persistence of Tehran’s hatred of the United States without understanding the resentment at Washington’s complicity in the overthrow of Mossadegh and the subsequent patronage of the Shah over the next quarter century. The blowback in such places as South Korea and the Philippines has mercifully been much milder, but even in those countries, suspicion of U.S. intentions lingers decades after the dictatorships have passed into history.

Unfortunately, there are few signs that U.S. officials have learned that their preference for authoritarians is both sleazy and counterproductive. The ongoing embrace of el-Sisi confirms that Washington is still alarmingly fond of friendly dictators.

Ted Galen Carpenter, a senior fellow at the Cato Institute and a contributing editor to the National Interest, is the author of ten books and more than 600 articles and policy studies on international affairs. His latest book, coauthored with Malou Innocent, is Perilous Partners: The Benefits and Pitfalls of America’s Alliances with Authoritarian Regimes (forthcoming, September 2015).