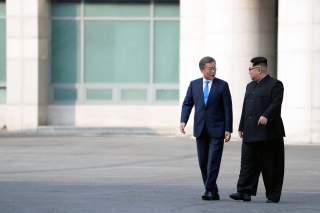 The emerging formation of a possibly more hawkish U.S. foreign policy may had played a big factor behind Kim Jong-un’s sudden secretive visit to Beijing ahead of his upcoming talks with President Trump. The Trump administration's recent cabinet designations (i.e. Bolton, Pompeo) and strongly worded official documents (i.e. NDS, NSS) provide face and grounding to this transformation. The DPRK Supreme Leader seem to attach high importance to the upcoming meeting with his U.S. counterpart, realizing that serious consequences may take place if the talks failed.

The designation of John Bolton and Mike Pompeo as national security advisor and Secretary of State respectively demonstrate readiness to shift to a more hawkish U.S. foreign and security policy. Both were considered as war hawks and advocates for regime change in Iran, Syria, Libya and North Korea. Former U.S. Representative to UN Bolton share similar nationalist and conservative views as Trump and continue to justify U.S. war against Iraq even after findings reveal that the regime did not possess weapons of mass destruction as was initially speculated. If he had done it for Iraq, it should not be difficult for him to argue for a more robust action against DPRK which already possesses a nuclear weapons and missile program and possibly with its longtime ally and benefactor, China. Bolton is a notable figure in Fox News TV, a favorite channel of the president and one of the few media outlets that provides positive coverage of the Trump administration. Pompeo, on the other hand, has good personal relations with Trump, having served as Trump’s CIA Director. He also has strong links with the defense sector and a lifetime member of the National Rifle Association gun-lobby group. Both Bolton and Pompeo also hail from the same Republican Party as the president. Shared views and good personal relations combine to make Bolton and Pompeo’s voices highly valued by Trump.

The lack of a strong countervailing faction within the White House may only solidify this hawkish foothold in the executive branch. The resignation/removal of cabinet officials who seem to differ from Trump on policy issues suggests minimum tolerance for dissenting opinions and diversity of views. Former State Secretary Rex Tillerson who earlier initiated talks with DPRK was undermined by Trump tweeting that Tillerson was just wasting his time. Tillerson also did damage control after the president’s controversial “shithole” remarks in relation to some countries, such as from Africa. Ex-economic adviser Gary Cohn supported the tax reform, but opposed the tariff policy. The departure of Cohn may leave no brake to the ascendance of a hawkish trade policy under senior economic aide Peter Navarro, Commerce Secretary Wilbur Ross, and U.S. Trade Representative Robert Lightizer, who are all supportive of the tariff and a more confrontational trade policy, especially against China.

The December 2017 National Security Strategy and the 2018 National Defense Strategy (NDS) also spoke strongly against North Korea, as well as Iran (both described as a rogue regimes) and major power rivals China and Russia (described as revisionist powers). NDS, in particular, identified inter-state strategic competition, not terrorism, as the key challenge confronting America. That China and North Korea were both named in the official documents surely created a common agenda for Xi and Kim to talk about.

All these recent developments raise the stakes for the Trump-Kim meeting. If the talks fail, Trump and his increasingly hawkish cabinet can argue that they gave diplomacy a chance before undertaking two possible courses of action: 1) expand existing sanctions against DPRK or; 2) use the military option. This scenario should give Kim enough reason to worry. Hence, any opportunity to strengthen his position ahead of the talks and secure the backing of his strong neighbor and historical ally is necessary. This is a major motive behind the visit to Beijing, his first foreign trip since assuming power.

Kim had long been known to demonstrate independence even from Beijing despite being dependent on China for most of its food, energy, finance and trade requirements. The assassination of his uncle and other officials known to be close to Beijing and timing DPRK missile tests to coincide with key events hosted by China illustrate his desire to carve his self-reliance policy. As such, the urgency by which he was willing to mend ties with Beijing suggests a possible increase in DPRK’s external threat perception and the need to obtain guarantees and support from his country’s traditional benefactor and friend. After meeting President Xi, Kim is set to meet his ROK counterpart. These two prior meetings would somehow increase his leverage ahead of the summit with Trump. Kim’s visit to Beijing and Seoul may somehow give cushion against regime change if his meeting with Trump fail. But whether he obtained such guarantee from Beijing is speculative.

For China, Kim’s visit bolsters its importance as a major regional player. Xi, no doubt, was able to impress on Kim how significant China is for DPRK and for any efforts to resolve the nuclear issue, as well as the future of the Korean Peninsula. It remains to be seen whether Kim will take this seriously after the threat of U.S. intervention recedes or the maximum pressure policy loosens. The visit enabled Beijing to convey its interests to DPRK and intimated that such interests should not be harmed in any negotiations Kim may enter with ROK or United States.

That Kim decided to meet Xi first before Trump and for China not coordinating the visit with United States may be taken as a slight by the United States. It could also be seen as a classic DPRK strategy of driving a wedge between international partners—United States, ROK, Japan, China, Russia—to prevent a united position that will be negative to DPRK interests, especially its nuclear ambitions. China may be seen as breaking common cause with United States, ROK, Japan, and the rest of the international community in exerting maximum pressure through sanctions to discourage DPRK from further developing its nuclear and missile weapons program and instead sway Pyongyang to eventually dismantle them. This may ruffle some feathers with Washington, especially since the visit came after recent announcement that China will undertake retaliatory measures in response to U.S. tariff impositions.

The Beijing visit and Kim’s next stop at Seoul may undercut U.S. advantage ahead of the Trump-Kim meet. Critics of Trump’s upcoming talks with Kim argue that the meeting will not give any gain for the United States. This is especially so as such talks will take place without preconditions and without DPRK undertaking any worthy positive action to merit such high-level exchange. It was even seen as rewarding Kim as DPRK state-run media may depict the meeting as American recognition of North Korea as a nuclear weapons state. Hence, under these circumstances, a Trump-Kim meeting is considered premature and unwise by some quarters.

In sum, fear of a more hawkish U.S. foreign policy drove Kim’s sudden secretive visit to Beijing. Mending frayed ties and securing support against the backdrop of increasing isolation constitute key DPRK agendas. It is arguable what Beijing actually provided Pyongyang and it is unlikely for Xi to simply allow himself to be hijacked by Kim’s predicament. That said, recent U.S. actions and domestic political developments surely create shared concerns for both Northeast Asian neighbors.

Lucio Blanco Pitlo III is a research fellow at the Asia-Pacific Pathways to Progress Foundation and is based in Washington, DC for his graduate studies in defense, diplomacy and development at American University. The views expressed here are his own.