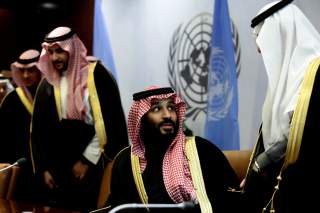 President Trump’s decision yesterday to “nix” the Iran Nuclear Deal was reckless. However, it provides a golden opportunity for the Trump administration to bolster nuclear negotiations with another Middle Eastern State, Saudi Arabia. The two countries are negotiating a nuclear-cooperation agreement but a sticking point has involved whether the Saudis will agree to forego dual-use technologies that can be used to produce either nuclear energy or nuclear weapons. Given the Trump administration’s claim to have left the Iran deal based on nonproliferation concerns, it now has leverage to apply the same policy to Riyadh.

The administration hopes to submit a final agreement with Saudi Arabia for congressional approval by mid-June. Such an agreement is necessary for the United States to transfer significant nuclear material, equipment, or components from the United States to Saudi Arabia and could considerably help U.S. companies like Westinghouse be shortlisted later this year to build the country’s first two nuclear reactors. By submitting the deal by mid-June, the administration would meet the deadline for the shortlist as well as legal requirements that the current Congress have ninety days to block the deal or have it automatically approved.

Trump’s claim that his withdrawal decision from the Iran deal will strengthen his hand in negotiating a better Iran deal is yet to be proven. But Trump can prove that he truly wants to prevent an arms race in the Middle East by insisting on specific provisions in the nuclear cooperation agreement with Saudi Arabia that will make it harder for Riyadh to use its nuclear energy program for weapons purposes.

An outstanding issue in the talks is whether the Saudis will agree to forego uranium enrichment and spent fuel reprocessing, two dual-use technologies that can be used to produce fuel useable in nuclear reactors but can also be used to produce the highly enriched uranium or separated plutonium needed for nuclear weapons. A decade ago, Iran’ and Saudi Arabia’s neighbor, the United Arab Emirates, pledged not to engage in any enrichment or reprocessing activities whether the materials and facilities were supplied by the United States or others. Saudi Arabia has resisted making a similar unconditional pledge. Other nonproliferation measures that could ensure the Saudi energy program will not be used for weapons purposes would include the adoption of the Additional Protocol, an agreement that provides the IAEA additional monitoring and access rights, acquisition from foreign suppliers of nuclear fuel for the entire life of the reactor, and the return of the spent fuel from the reactor to the supplier.

To secure an agreement with the United States that will pass Congress, the Saudis may agree on a moratorium on enrichment and reprocessing. But in order not to lag too far behind Iran’s capabilities, they would likely tie their pledge to Iran’s enrichment activities. In an interview in mid-March, Saudi Crown Prince Mohammed bin Salman warned: “Without a doubt, if Iran developed a nuclear bomb, we will follow suit as soon as possible.” Given the United States just exited the Iran deal, it is unclear for how much longer Iran will abide by its enrichment restrictions.

According to President Trump’s announcement yesterday, the United States will now reimpose stringent sanctions on Iran and is considering new penalties. If the Trump administration reimposes all U.S. nuclear-related sanctions, including secondary sanctions targeting international trade with Iran, then European countries will find it extremely difficult to do business with Iran. Under such a situation, Iran may decide that its main reason for joining the deal, namely economic recovery through foreign investments, cannot be achieved, and withdraw from the deal. This does not mean that Iran will start enrichening above the 5 percent agreed in the deal immediately, but Iran’s nuclear chief Ali Akbar Salehi has said that if such a decision is made by Iran, then it will “only need four days to ramp up to 20% enrichment.”

Given the uncertainties about Iran’s response over the next few months to Trump’s action, as well as the good will Trump’s decision has generated in Riyadh, the administration might also want to probe the possibility of extending the negotiations in order to win nonproliferation concessions and submit the agreement to a new Congress in January. By then, hopefully the direction of Iranian actions on its nuclear program and any U.S responses will be clearer and allow Washington to tailor the Saudi agreement accordingly. To be sure, this could risk the chances for the U.S. bid—Riyadh may want to move more quickly, or it may decide to work with a non-U.S. company that places fewer restrictions on its enrichment and reprocessing capabilities. But there is little practical reason that Saudi Arabia cannot postpone its bid decision and plenty of political and diplomatic reasons for it do so. Yet, even in the case that Saudi Arabia keeps to its schedule, the U.S. nuclear industry could still play an important role. Although a reactor deal would produce the highest revenue, there are many other important areas through which the United States can assist the Saudi nuclear program—from developing its power grid, building related infrastructure to training personnel, and developing independent legislative body.

The administration would be wise to coordinate strategies on both the Iran and Saudi Arabia nuclear programs. Preventing the two countries from having a nuclear-weapon capability and competing in a nuclear arms race is the goal. The rest can wait.

Ramya Ramjee is an intern at the James Martin Center for Nonproliferation Studies in Washington DC, and a student at the University of Southern California.