Watch Out: How North Korea Could Secretly Make Nuclear Weapons 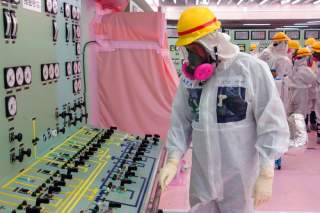 North Korea’s recent (disputed) claim of a successful hydrogen bomb test has observers wondering where the North Koreans are getting their hydrogen from. The hydrogen that powers thermonuclear weapons is not ordinary hydrogen gas, but its isotopes or variants deuterium and tritium.

This deuterium-tritium “boosting” dramatically increases the yield of fission weapons, and permits smaller weapons and better economy of fissile material. Conceived by Theodore Taylor, one of America’s most gifted weaponeers, the very existence of boosted fission technology remained classified until the early 1970s.

Tritium—possessing three particles in its nucleus versus the one in ordinary hydrogen, hence “tri”—is radioactive and fleeting. 5.5 percent of a given amount of tritium gas decays into other stuff every year. Its shelf life is bound by its half-life, which is 12.3 years. Thus nuclear-weapons complexes must constantly create tritium, to replace what’s lost to physics.

During the Cold War, the United States produced its tritium as a by-product of plutonium production. Both bomb fuels emerged from nuclear reactors at the Atomic Energy Commission’s (now part of the Department of Energy) Savannah River Plant in Georgia. Bathed in a storm of neutrons within a reactor core, slugs of lithium isotopes changed into tritium, helium and more neutrons. This is true alchemy, the transmutation of elements.

But reactors are not the only device capable of nuclear alchemy. The particle accelerator, a powerful electromagnetic device that drives subatomic particles to tremendous speeds and crashes them into targets of special materials, can produce a wide and useful variety of transmutations. They are capable of finer control over nuclear reactions than reactors, thus allowing a greater variety of outputs. They can do so while generating less nuclear waste and can even be set up to transmute such waste. But as with all magic, there’s a catch.

This seemingly advanced nuclear technology actually has roots going back to the early days of the nuclear age. In the 1930s and ’40s scientists discovered several new elements and phenomena using accelerators. During the Korean War, what later became Lawrence Livermore National Laboratory developed a 350-million-electron-volt particle accelerator to produce plutonium. The project, meant to end U.S. dependence on South African uranium, ended with the discovery of American uranium deposits.

During the 1990s, the United States again explored using accelerators for tritium production when it considered new facilities. The Department of Energy chose to remain with reactor-based production and to use improved tritium-breeding target rods. However, the studies noted the versatility of accelerators.

In a paper entitled “Technology Benefits Resulting From Accelerator Production of Tritium,” Gregory Van Tuyle of Los Alamos National Laboratory described a machine shaped very like an alchemist’s alembic, the iconic spherical glass vessel with a long thin beak. A long thin vacuum-filled accelerator would pump neutrons up to extreme speeds and shoot the beam into a shielded barrel-shaped “transmuter.”

To produce tritium, load the transmuter with lithium-6 slugs. To produce valuable isotopes for nuclear medicine, such as technetium-99, iodine-131 or fluorine-18, just load the appropriate slugs. The particle accelerator’s precise activity also allows for the creation of novel isotopes for experimental studies.

Load it with neptunium-237 (itself a transmutation by-product of of bomb fuel production) and the machine could crank out plutonium-238, the fuel used in the nuclear electrical generators powering deep-space craft. NASA and the Energy Department have restarted reactor-based Pu-238 production, but a steady supply remains years away. The same accelerator-transmuter design that makes medical isotopes could make space fuel, a common design perhaps reducing construction costs.

Accelerators could also magick away the worst headache of the nuclear age—the incredibly “hot,” toxic, long-lived nuclear waste generated by nuclear weapons production and civilian power generation. Surprisingly, only a small fraction of the total waste stockpile consists of the really bad stuff. If it could be neutralized, the disposal problem could be dramatically simplified. No longer would nuclear waste need to be isolated for geological ages.

To achieve this alchemy, the neutron beams would cause noxious atoms to fission into less energetic daughter isotopes, with much shorter half-lives. While still deadly, the resulting reduced waste would match natural uranium’s emissions within a few centuries (as opposed to ten thousand years or more). With the uncertain status of Nevada’s Yucca Mountain waste storage facility, a waste-reduction system becomes more desirable.

In most tales of magic the enchantment comes at a price, and so it is with particle accelerator technology. A device capable of nuclear transmutation can turn natural uranium-238 into the bomb fuel plutonium-239 or thorium-232 into uranium-232, a rarely used isotope that can power a crude, gun-type nuclear weapon. But why would someone fiddle with accelerators instead of the tried-and-true reactors?

Because reactors can be detected.

An entity wishing to build nuclear weapons without anyone noticing has a hard time nowadays. The fission process driving nuclear reactors produces telltale signature pollution, from radionuclides to thermal emissions, that a great many sensors now look for. More visibly, a reactor complex looks distinctive from air or space, which coupled with emissions and unusual imports of nuclear technology will draw international scrutiny.

But particle accelerators are now found in many major hospitals, where they treat cancerous tumors. Parts and replacements ship internationally for legitimate reasons. Proton-beam therapy and positron-emission tomography (PET) scans, for example, both rely on large particle accelerators.

Accelerators require great amounts of electricity and do generate emissions, though much less than equivalent reactors. Colocating an accelerator-powered transmutation facility in, say, an aluminum plant might leave few telltale signs of a nuclear-production system.

Getting the stuff out of the irradiated slugs is tricky. Extracting the transmuted material with solvents and other treatments makes a lot of radioactive waste full of easily detectable radionuclides. The right transmuter design—as simple as a cube of lead sixteen feet on a side—and careful control of the process can reduce the problem.

A nation possessing access to foreign markets, a nuclear-medicine program, industrial capacity, access to uranium or thorium and a drive to obtain nukes could theoretically do so without following the current nuclear powers’ paths to bomb fuel. That poses yet another challenge to arms control and anti-proliferation efforts at a time when such efforts are flagging in the court of international opinion.

As R. Scott Kemp of the Program on Science and Global Security at Princeton University wrote:

“Considering then the ease with which these advanced accelerators can be acquired from foreign sources, the reduced reprocessing complexity afforded by nonmultiplying transmuters, and the simplicity of constructing a 233U gun-type weapon, one concludes that many of the natural barriers to proliferation can be lifted by employing particle accelerators, even for the most primitive of proliferators.”