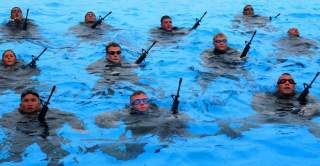 We live in an age of great anxiety about threats to global peace and stability. Among these are worries that intense water-related stresses, now showing up in regions around the world, may become all-too-common sources of conflict. Just as often, however, concerns about water wars are dismissed as much ado about nothing. An influential school of thought has long contended future international conflicts will not be fought over this resource. Water, it says, is of such elemental importance to human existence that even long-time adversaries will be forced to accommodate one another’s needs in a water-scarce future. As water is too expensive to transport over long distances, moreover, it is very difficult to steal or plunder. And history gives some comfort to this forecast: as few wars have been fought specifically over water, it is highly unlikely humanity will start engaging in water conflicts now. Or so the thinking goes.

In the case of water, this logic — of the past as predictor of the future — is compelling and comforting. But it also is dangerously myopic, for it fails to consider the possibility that the future may look nothing at all like the past. From nearly any standpoint, the world we live in is a fundamentally different place compared with the past. Over just the last century, for example, the global population has rocketed upward from roughly two billion to well past seven billion. While population growth is hardly the only driver of social, economic, and ecological change at global and regional scale, it has been among the most important. Nor is this process at an end. Current demographic projections forecast a global population of at least nine billion by 2050 — and possibly more.

Water in the Anthropocene:

Population growth provides a fitting illustration of the rapid pace of change in the modern world. No consequence is more important than what has been done to nature. Humans have so drastically altered the Earth that scientists now question whether we remain in the Holocene, the 12,000-year-old geological epoch during which all of recorded human history has occurred. Instead, increasingly they speak of the Earth as having entered a new epoch, the Anthropocene. The basic idea behind the Anthropocene is that human activity has so thoroughly disrupted the Earth’s core processes (for instance, its nitrogen cycle or sediment flows) that the planet no longer can be said to function according to the familiar rhythms of the Holocene. Human interference in the Earth’s carbon cycle, for example, has changed the planet’s climate and in the process altered rainfall patterns, accelerated glacial melting, increased air and sea temperatures, and much else. Gone is the Holocene’s stable climate; here is the Anthropocene’s unstable one.

While there is some debate amongst scientists and others about whether the Anthropocene will lead to a better or worse future, nearly everyone involved in the discussion agrees that the Earth of the future will not resemble its past. From here forward, we face an unfamiliar planet that will throw our assumptions about nearly everything out the window.

No resource stands to be more affected by the arrival of the Anthropocene than fresh water. Finite and increasingly scarce in many parts of the world, fresh water remains the most vital single input for everything from food production, energy generation, and manufacturing to human health, social development, and economic modernization. Unlike oil, water has no substitute, making access to it nothing less than a matter of existential importance to every living creature on Earth.

Yet despite its monumental role in local and international affairs, water ironically remains completely undervalued, pumped and consumed virtually free of charge across much of the world. We essentially pump water as we breathe oxygen; it is a learned reflex, central to our ability to survive and thrive as a species. Nicknames like “blue gold” and “oil of the 21st century” attest to the value of fresh water and its importance to everyday affairs throughout the world.

While every country’s water equation is different, at a global scale the basic problem is that demand for water is soaring while water supplies are being squeezed. On the demand side, the challenge results from an inexorable combination of global economic and population growth combined with water-use inefficiencies. On the supply side, the problem results not just from exhaustion of the world’s stock of fresh water capital, as is happening to groundwater reservoirs nearly everywhere. Fresh water supply is also becoming less predictable as climate change sets in—shifting rainfall and snowfall patterns and increasing evaporation rates are giving us more frequent droughts and floods.

The upshot is that the arrival of the Anthropocene foreshadows a world where received wisdom may no longer be a reliable guide to the future. Water insecurity from drought, excessive groundwater extraction, and changed seasonal precipitation patterns is affecting — or soon will affect — regions as diverse as the Middle East, South Asia, the Caribbean, northern China, sub-Saharan Africa, the western United States, and many more.

Much as oil shaped the global geopolitics of the 20th century, water has the power to reorder international relations in the current century. The world’s emerging water geopolitics are complicated, as fresh water resources are distributed unevenly across the globe. There are great water powers, blessed with enormous renewable reserves (Brazil, Russia, the United States, Canada, and China round out the top five). But even within these huge countries, water availability is not uniform, with southern Brazil, the western United States, northern China, and other sub-regions facing intense water stress.

Far more numerous than the water powers are the water have-nots, a growing list of countries suffering through a perfect storm of rapid population growth, resource depletion, poor governance, economic stagnation, and unsettling climate change impacts, all within the context of chronic aridity. The most water-fragile among them are concentrated in a strategically significant belt stretching from North Africa across the Middle East and Horn of Africa into Central, South, and East Asia. It is in these naturally arid or semi-arid countries where water scarcity has the greatest potential to inflict serious harm.

Water stress is best understood as a precursor to conflict. While the environmental security community generally agrees that water disputes rarely leads to interstate violence, the same cannot be said of intrastate conflict. Here, at the subnational level, water disputes and instability can trigger violent conflict, particularly in situations of existing social, political, or economic fragility. Water stress acts as an accelerant, increasing the likelihood of conflict. Moreover, water scarcity-fueled instability can have dangerous security implications for wider geographic regions.

Take Syria as an example. Between 2006 and 2010, the country was hit hard by drought, which wiped out rural livelihoods for many and caused significant internal displacement across the country. Internal displacement in turn helped stir up a pot that boiled over into all-out civil war in Syria, eventually spreading to Iraq. Over the last two years, ISIS has viewed water access and control as a primary strategic objective of their campaign, and has commandeered hydroelectric dams, irrigation canals, reservoirs, pipelines, and other water infrastructure to cement territorial gains.

Water has played an important role in Yemen’s ongoing collapse. Decades of mismanagement have left the country — one of the world’s most water-scarce nations — with dilapidated water infrastructure, severely depleted groundwater reserves, and high rates of water-use inefficiency. Yemen’s capital, Sana’a, may become the first capital in the modern world to functionally run out of water, possibly as soon as 2025.

In Pakistan, meanwhile, runaway population growth and shifting rainfall patterns threaten its water outlook. With a massive population set to nearly double in the next 35 years, Pakistan’s demand on its very limited water resources will intensify in a way that is almost unimaginable. Already, the country is one of the most water scarce on earth. In a nod to water’s importance in shaping the region, many Pakistani militant groups long hostile to India have supplanted protests over Indian control of Kashmir with more specific protests over access to Kashmir’s most valuable resource — water.

Other countries join Syria, Iraq, Yemen, and Pakistan on the list of nations facing a similar combination of water stress and social and political insecurity. They include conflict-prone countries of geopolitical significance, including Iran, Afghanistan, Egypt, Libya, Nigeria, and Somalia. Even more worrisome, global heavyweights such as China, India, and even the United States face uncomfortable futures given mismatches between forecasted demand for water and squeezed sources of supply. While there is no reason to believe that the latter states will suffer from the same forms of insecurity as those countries in the arc of crisis, neither will they be exempted from the blunt realities of a water-stressed world.

American Leadership in the Anthropocene:

In 2012, the U.S. Office of the Director of National Intelligence (ODNI) produced a global water security assessment, a first for the American intelligence community. Over the coming decade, it said, many countries would face water stresses that “will risk instability and state failure, increase regional tensions, and distract them from working with the United States on important U.S. policy objectives.” It listed water-induced stressors that likely would unsettle these states and their neighbors, ranging from pressures on food and energy production to social and political disruption to water scarcity used by terrorists for leverage.

Yet despite the seriousness of ODNI’s assessment, the U.S. government has neither a coherent strategy nor the appropriate tools to deal with the scope and scale of water-related challenges around the world. The federal government’s approach to water and water-related challenges is uncoordinated, outdated, and poorly resourced in general. In foreign policy terms, water receives some attention but, as on the domestic side, water receives too little attention and funding (in fiscal year 2013, the U.S. government spent $784 million worldwide on water, about half of which was spent on drinking water and sanitation). This inertia is understandable to an extent, as water is a cross-cutting resource that does not fit easily into preexisting policy boxes.

It is hardly an original argument to call for greater American leadership in international relations. Yet in the case of water, such an argument could not be truer. As the world’s greatest power, it is in America’s interests to place global water security at the top of its foreign policy agenda, and to forge a leadership role in this arena. Failing to craft a strategic approach to the world’s looming water crises will expose the United States to foreign and security policy failures abroad. Conversely, seizing the leadership mantle will benefit the United States immensely and add to its global reputation over the coming decades.

Despite the rise of China, India, and other actors, American leadership will remain central to the operation of the global system for many years to come, and America’s many formal and informal assets will give it unrivaled power and prestige across multiple domains. From a strategic standpoint, the U.S. would reap material, diplomatic, and reputational rewards if it were to be perceived as a good-faith actor working to solve the world’s water challenges.

The bottom line is that no one can take much comfort from a sober assessment of where we are headed. Expecting widespread and serious water challenges to be solved without conflict and disruption might be a comforting premise, but it should not and cannot be the end of the discussion. The Anthropocene awaits. To navigate it unscathed, we must be bold and imaginative.

Peter Engelke is a Resident Senior Fellow with the Strategic Foresight Initiative at the Atlantic Council in Washington, DC.

Russell Sticklor is a Non-Resident Research Fellow with the Stimson Environmental Security Program in Washington, DC.