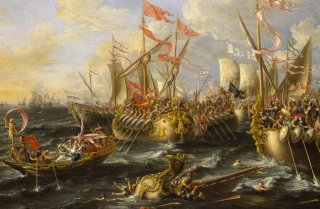 MUCH AS we like to pat ourselves on the back about human progress, lots—if not most—of it has been the product of chance observation and unintended consequences. Observing a moldy piece of bread triggers a eureka moment in the development of penicillin; a mundane ride on a trolley helps Albert Einstein conceptualize his theory of relativity; the efficacy of Vitamin C in preventing scurvy is stumbled upon by eighteenth-century British naval officers who notice that a regular supply of lime juice avoids outbreaks of the disease on long ocean voyages (earning British sailors their traditional nickname, “Limeys”). The list goes on and on.

Of all the fields of human progress, none owes more to unintended consequences than global exploration. The great American naval historian and Columbus biographer, Samuel Eliot Morison, summed it up admirably when he wrote—half in earnest, half in jest—that:

America was discovered accidentally by a great seaman who was looking for something else; when discovered, it was not wanted; and most of the exploration for the next fifty years was done in the hope of getting through or around it. America was named after a man who discovered no part of the New World. History is like that, very chancy.

In The Boundless Sea: A Human History of the Oceans, Cambridge historian David Abulafia offers a majestic narrative of mankind’s incredible, sea-born drive toward global discovery and interconnection, a voyage beginning in prehistoric times and lasting all the way up to the twenty-first century. From the beginning, the very seas that separate us have also served as a liquid bridge, first between neighboring islands but ultimately between continents and hemispheres, as mankind mastered navigation and gradually discovered the Earth’s true size and shape.

EVEN TODAY, in the age of jet transport and space exploration, the seas are still the broadest thoroughfare for global commerce, and naval strength still plays a critical part in the international balance of power. In a globalized age, mastery of the seas is, if anything, more important than ever. America’s place as a superpower is more reliant than ever on its ability to keep seaways open and to use its naval power to deploy air and land forces wherever and whenever needed.

As it happens, mastery of the seas for at least three centuries has been an Anglo-Saxon monopoly, often challenged but never broken. While the British standing army was usually a relatively small, neglected fighting force compared to its main continental rivals—France in the eighteenth and early nineteenth centuries and Germany in the late nineteenth and early twentieth centuries—the Royal Navy remained the undisputed ruler of the waves throughout the period. On the whole, this has proven to be a good thing.

British naval power was the key to thwarting the attempts of Louis XIV and his autocratic Bourbon successors, and a Napoleonic military dictatorship after them, to impose their will on the rest of Europe. With the decline of France and the rise of a unified Germany dominated by Prussian militarists, the Royal Navy’s continued domination of the seas was essential to Allied victory in World War I. World War II represented an important transition—an Anglo-Saxon naval condominium. The still-dominant but over-stretched naval power of Great Britain was reinforced by the rising naval power of the United States, where the building of a vast, “two-ocean” navy had begun earlier in the century under President Theodore Roosevelt. By war’s end, an exhausted Britain had begun its imperial recessional, which included a diminished naval presence. The oceanic torch was passed from one Anglo-Saxon partner to the other.

Alfred Thayer Mahan’s description of the role of the Royal Navy in stopping Napoleon from dominating the rest of Europe could be updated to describe the role of American naval power in helping to topple Hitler and then containing Soviet influence on the European continent and around the globe: “The world has never seen a more impressive demonstration of the influence of sea power upon its history. Those far distant, storm-beaten ships, upon which [Napoleon’s] Grand Army never looked, stood between it and the dominion of the world.”

History, like nature, abhors a vacuum. Even as Soviet power and global reach was crumbling, a new totalitarian superpower was emerging in the east. And, unlike the ussr and its authoritarian Russian successor state, China is an economic powerhouse. Economically, as well as militarily, the competition for global dominance has shifted from west to east, from the Atlantic to the Pacific. But while the setting and the cast of players have changed, the storyline is hauntingly familiar. In the opening years of the twentieth century, as Europe’s only “off-shore” power, Great Britain found its naval superiority seriously challenged by the dominant continental land power, Wilhelmine Germany, the economic powerhouse of Europe. Today, America, at the other end of the Pacific, is the dominant “off-shore” naval power being challenged by China, the dominant continental power in Asia, which is even more of an economic superpower today than Germany was in 1900. Whether the Sino-American rivalry remains peaceful or ends in armed conflict, the naval balance of power will play a pivotal role.

AS IT has so often in the past, what happens at sea will determine what happens ashore. This is one of the underlying lessons that runs through Abulafia’s exhaustive survey. “In the making of connections between human societies, the role of the sea is particularly fascinating,” he writes in his preface.

Connections across large open spaces have brought together peoples, religions and civilizations in stimulating ways. Sometimes this has been through individual encounters, as travelers, including pilgrims and merchants, found themselves visiting alien environments; sometimes it has been the result of mass migrations that have changed the character of regions; sometimes it has been the result as much of the movement of goods as of people, when the inhabitants of distant lands saw, admired, and imported or copied large amounts of the art works of another culture, or read its literature, or were taken aback by some rare and precious item that opened their eyes to its existence. Such contacts were made overland and up and down river systems as well as by sea…

Here Abulafia draws an important distinction between contacts made overland and those made by sea. “…[O]verland they were mediated by the cultures that lay along the routes being followed, whereas links across the sea could tie together very different worlds, as far apart as Portugal and Japan or Sweden and China.” In his justly acclaimed 2011 work, The Great Sea: A Human History of the Mediterranean, Abulafia concentrated on the rich history of a relatively small body of seawater and the regions it influenced during the rise and interaction of ancient civilizations and the emergence of Western civilization. For this reason, the Mediterranean is treated marginally in The Boundless Sea since the latter work is intended to serve as a companion volume, but with this important distinction:

Whereas the Mediterranean accounts for 0.8 per cent of the maritime surface of the globe, seas as a whole account for about 70 per cent of the world’s surface, and most of this watery space consists of the vast open areas we call oceans. From outer space, the Earth is mainly blue. The oceans have distinct but gigantic wind systems, generated by the movement of air over vast masses of both warm and cold water: one has only to think of the seasonal monsoons in the Indian Ocean. The Roaring Forties that would helpfully sweep sailing vessels from the Atlantic into the Indian Ocean were the same winds that made entry into the Pacific from the southern Atlantic, around Cape Horn, so frightening. Currents such as the Gulf Stream, which keeps the British Isles relatively warm, or the not dissimilar Kuroshio or Japan current, stretch across thousands of miles.

“We divide the all-encompassing global sea into the three great oceans,” he adds, “but ancient geographers, with some justice, imagined it to be a single Okeanos of intermingled waters, a concept revived in modern use of the term ‘World Ocean’ to describe all the oceans as a single unit.” Hence a single book embracing them all.

THE BOUNDLESS Sea is chronologically divided—with some necessary movement back and forth—into five sections. Part One (“The Oldest Ocean: the Pacific, 176,000 BC–AD 1350”) deals with prehistoric nautical life, the role of navigation in the rise of ancient and pre-modern empires, and the wakening awareness of Europeans to what potential wealth and adventure might lie beyond the watery horizon. From the very beginning, that spirit of adventure—intangible, unmeasurable but a necessary catalyst to exploration—must have been present. Surely ancient Polynesian mariners must occasionally have felt the same sensations that Morison would attribute to Christopher Columbus countless centuries later: “He enjoyed long stretches of pure delight such as only a seaman may know, and moments of high, proud exultation that only a discoverer can experience.”