We Asked Grover Norquist: What Should Be the Purpose of American Power? 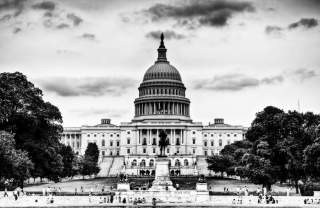 The purpose of American power is to protect the independence of the government and the liberty of the American people from threats from hostile states or political movements.

And what is the United States? Germany is a place and a people. France is a place, a language and a culture. America is a people of the book: the Constitution. We are not united by race or religion. We come from everywhere in the world. Even our language is fluid: an English base with new words and phrases flowing in from around the world. We are united by a commitment to individual liberty and the structures created by the Constitution that have ensured that liberty through our history.

Our armed forces are to protect our liberty. Not to expand our borders, convert or kill the heathen, settle ancient grievances against others or loot our neighbors’ lands. We are not the Roman, Spanish, British or Soviet Empire.

As individuals we may wish everyone recognized our personal religious commitment as the one true faith. As individuals we may evangelize within our borders or even overseas. But our government does not employ an army in the name of any religion. We are not Spain circa 1500.

We may wish others saw the virtue of choosing their leaders through democratic elections. But American power should not be at the disposal of those who would—with whatever good intentions—impose their theories, however virtuous, on other peoples.

We can change the world to make it less threatening to us in two ways. First, by remaining militarily and economically strong enough to deter would-be threats, and by swiftly and surely punishing those who attack us. Second, through the “soft power” of being a good example. When we are seen as successful, rich, free and untroubled, others are most likely to admire and emulate us. Failed states attack nations they fear, not those they envy.

We should remember what made us free and great. Property rights. The economic liberty of contract and association. Low taxes and limited government. Our occupation of Japan was a success because Douglas MacArthur installed property rights. In Iraq and Afghanistan, we thought the secret sauce was periodic elections for control of the state.

Many nations have elections. Fewer have free societies. Those most anxious to misuse our military power to remake other nations are the most likely to miss what makes America exceptional. Elections are a good way to transfer power in a society already dedicated to liberty. But one can make a long list of nations with regular elections that are far from free.

We contained the Soviet Union. Our freer economy left it in the dust. When struck we can and usually should strike back, hard. But not to become entangled with a tar baby. Rather, we should move forward economically, leaving behind in the distance those who hate us—as we did with Cuba—to rant pathetically.