We Asked Ian Bremmer: What Should Be the Purpose of American Power? 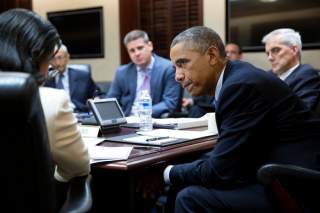 Only the United States can combine military muscle, economic clout and cultural appeal to exert power in every region of the world. It will remain the world’s sole superpower for the foreseeable future. How should America use that power? To promote American values, advance U.S. interests, do both or do something else entirely? For Americans and the future of their country, what is the wisest path forward?

For decades, the Soviet threat persuaded Washington to use the nation’s power in support of both American values and U.S. interests around the world. The Cold War sometimes blurred the line between the two as some U.S. policy makers argued that each bolstered the other. But when the Soviet Union imploded, so did the strategic coherence of U.S. foreign policy.

A quarter century later, important changes, in America and the world, demand that U.S. policy makers redefine the purpose of U.S. power. Following the long wars in Iraq and Afghanistan, the American people will not support a U.S. military commitment that might require a costly, long-term commitment of U.S. troops and taxpayer dollars, limiting the range of options available to any president. There is now an entire generation of Americans not old enough to remember Cold War–era U.S. leadership.

Further, a lengthening list of emerging powers has begun to challenge the American-led order. China and others cannot undermine America’s global preeminence anytime soon, but they have the political self-confidence and economic heft to resist U.S. plans and demands. As a result, even traditional U.S. allies have begun to hedge their bets on American staying power, further limiting Washington’s foreign-policy options.

For Washington, choices loom. Perhaps the time has come for Americans to declare their independence from the need to intervene in other people’s problems. Instead of spending trillions to occupy and rebuild troubled countries, invest the money at home. Rebuild American infrastructure, invest in education, care for America’s veterans and leave more in the taxpayer’s pocket to fuel an economic revival. This is not isolationism. America should trade with both friends and competitors, and welcome immigrants to build the world’s strongest workforce.

Or maybe we should maintain an ambitious foreign policy, but one that focuses on America’s value rather than its values. Focus mainly on managing relations with China. Avoid further entanglement in the Middle East, including by allowing others to take the lead in combating the Islamic State. Build an intelligent foreign policy designed to maximize return on the taxpayer’s investment. Set aside support for democracy and human rights where it creates obstacles rather than opportunities.

Or maybe our globalized, interconnected world demands American leadership. Some will insist that America cannot remain secure and prosperous as long as both autocracy and anarchy generate turmoil. Maybe democracy and human rights are the only answer to these forces, and America is the only nation strong enough to ensure that governments around the world answer to their citizens.

There is no clearly correct answer to this question, but we can’t do all these things, and none of these options is viable without durable public support. The men and women running for president in 2016 will have to make a compelling case for a single, coherent foreign-policy strategy if Washington is to move beyond the costly improvisation of the past twenty-five years and employ American power in an intelligent and useful way.

Ian Bremmer is the president of Eurasia Group and the author of Superpower: Three Choices for America’s Role in the World (Portfolio, 2015).