We Asked Michael Lind: What Should Be the Purpose of American Power? 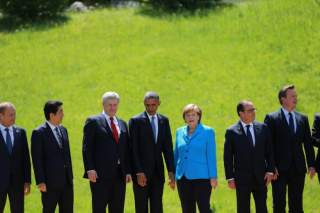 NSC-68, the 1950 Truman administration document that shaped America’s successful Cold War strategy of containment, began with a section entitled “The Fundamental Purpose of the United States.” It stated: “In essence, the fundamental purpose is to assure the integrity and vitality of our free society, which is founded upon the dignity and worth of the individual.” The purpose not only of U.S. foreign policy but also of the American republic itself is the preservation, in America, of what the Founders called “republican liberty.”

Republican liberty in America can be threatened from within by tyranny, oligarchy or anarchy. External threats can also undermine the American way of life. If world conditions become so dangerous that the United States can maintain its national independence only by militarizing society and conscripting the economy, then the American people—reluctantly, perhaps—will have purchased national security at the expense of individual liberty.

As President Woodrow Wilson observed, “You know how impossible it is, in short, to have a free nation if it is a military nation and under military orders.” In order to avert this outcome, American statesmen in the twentieth century sought to replace endless cycles of major-power wars, hot and cold, with what Wilson called “some definite concert of power.”

The first attempt at a great-power concert collapsed when the United States withdrew into isolation after World War I. Following World War II, the bankruptcy of Britain, the Communist takeover of China and the aggression of the Soviet Union doomed FDR’s vision of a postwar concert of “the Four Policemen.” During the Cold War, America improvised a policy of “quadruple containment”—encircling the Soviet Union and the People’s Republic of China, while converting West Germany and Japan into U.S. protectorates.

When the Cold War ended, America’s leaders refused even to consider replacing adversarial alliances and outmoded international institutions with a new global great-power concert that would include post-Soviet Russia and post-Maoist China as well as rising powers like India and Brazil. Instead, neoconservatives and neoliberal hawks as arrogant as they were optimistic sought to establish U.S. global hegemony. Washington extended NATO into former Soviet territory, defined permanent U.S. military domination of China’s neighborhood as a vital interest, and tried to turn Afghanistan, Iraq, Libya and Syria into American client states.

Excluded and encircled by the United States, China and Russia have aggressively sought to create their own spheres of influence, along with parallel international institutions that America and its allies cannot control. The result is a cold peace that may become another cold war.

Even if the United States had the wealth and power to achieve lasting global military hegemony, it lacks the will. The American people are unwilling to pay the price, as the political backlash against the wars in Iraq and Afghanistan and public opposition to higher taxes have proven.

It is time for Washington to abandon its misguided post–Cold War hegemony strategy in favor of what I have described as a “concert-balance” strategy. The best way to protect the American way of life from being sacrificed to defensive militarism is neither isolationism nor global domination. It is participation in a great-power concert that results in a less dangerous world.

Michael Lind is a cofounder of the New America Foundation, a contributing editor at The National Interest and author of The American Way of Strategy (Oxford University Press, 2006).