We Can’t Have it Both Ways In Iraq 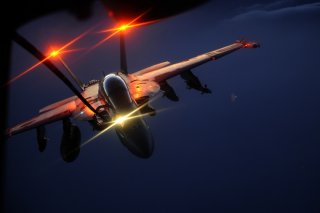 We don’t want to be involved in Iraq, apparently, except when we do. After sending several hundred special operations soldiers to serve in an advisory capacity to the Iraqi government, President Obama promised to guard against mission creep. Just last night, though, the United States conducted its first round of air strikes against the Islamic State in Iraq and Syria (ISIS) near the northern Iraqi city of Erbil. Will this small amount of creep be enough to accomplish the mission?
It depends on what the mission is.
If the scope of the mission is simply to protect American personnel along with those that are trapped on Mount Sinjar, then air strikes might be sufficient. But what next? If our involvement in Iraq is tied to a larger goal of restoring stability, it would be difficult to argue that we can bomb ISIS into submission. Even if we could, little would stop them from retreating to Syria and regrouping, least of all the United States.
As Iraq descends further into chaos, the current administration needs to take a hard look at its long term goals. If the President’s aim is to help restore stability in Iraq, our past experiences have shown that a sustained counter-insurgency campaign is likely required. The verdict is still out as to whether the Iraqi Army or the Kurdish peshmerga, both trained by Americans, will be able to accomplish this, but the prospects so far do not look good.
Relying on US special operations advisers alone to prop up Iraq’s military is not likely to prove sufficient either. The effectiveness of the advisers will naturally be limited by the hesitation of the administration to allow their use outside of command centers, and even if they were allowed to engage in combat, the force multiplying effect of 300 soldiers is not likely to prove sufficient to defeating ISIS.
Take an example from a different conflict. In the early days of the war in Afghanistan, commanders relied heavily on indigenous forces, with small detachments of American special operations soldiers leading the way. At the Battle of Tora Bora, the lack of an adequately sized and resourced force enabled al Qaeda fighters—Osama bin Laden among them—to escape into Pakistan. This occurred even with American special operations forces in the field; our current rules of engagement in Iraq relegate our troops to the sidelines.
If the President’s goal is truly to help turn Iraq back on a course to stability, then it is difficult to see how he might accomplish this given that he has forsworn the use of additional ground troops. The 2007 Iraq surge was pivotal to pushing back the insurgency, and as I detail in a forthcoming monograph, it took the mass brought to bear by the US Marine Corps to successfully rout out insurgents in urban Fallujah. Is there reason to think that the case would be different in urban Mosul or Tikrit?
Right now, the administration is only making things harder for itself. The President’s statement that he will send no additional American troops to Iraq, though politically soothing at home, also reassures ISIS that US involvement will remain limited. At home, the President has yet to explain precisely why the prospect of genocide was not reason enough to stay in Iraq in 2007, but that now, apparently, it is reason enough to strike.  Amidst this strategic confusion, it’s no wonder that the President’s foreign policy approval ratings are at an all-time low.
Let’s be clear: no one is advocating for sending hundreds of thousands of troops back to Iraq. But, as evidenced by the presence of American advisers and now air strikes, the decision of whether we should involve ourselves or not has already been made. What’s less clear is whether the President has defined his objectives and whether he is willing to dedicate what is required to achieve them.
Sound policymaking entails defining a political or military goal (the “ends”), assessing the tools available to achieve that goal (the “means”), and determining how the means will be used to achieve the end (the “ways”). If the mission in Iraq is to facilitate stability, then President Obama’s current approach exhibits a disconnect between “ways” and “ends.” If we’re not prepared to devise a coherent strategy aimed at defeating ISIS, then no amount of advisors or air strikes will make a difference in the long run. ISIS will simply watch and wait.
Of the current administration’s efforts, then, we must ask: “to what end?” Beyond the rhetoric, are we actually committed to facilitating Iraq’s return to stability, and if so, are we willing to do what’s necessary to accomplish this goal? The President made his political career on answering that question with an emphatic “No.” We can’t have it both ways. Which is it now, Mr. President?

Phillip Lohaus is a Research Fellow at the Marilyn Ware Center for Security Studies at the American Enterprise Institute.