We Can Verify This Deal 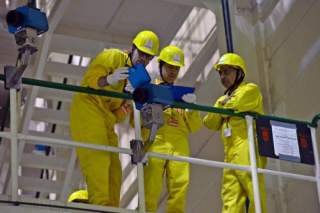 Both proponents and opponents of the nuclear deal with Iran acknowledge that its verification provisions are the key to judging the deals adequacy. As Secretary of State John Kerry put it, “distrust and verify.” That phrase substantially modifies President Ronald Reagan’s famous standard for arms-control agreements with the Soviet Union: “trust but verify.”

What are the standards for assessing verification? What little discussion that has taken place has focused on the mechanics of inspection—how long it will take to gain access to suspect sites, whether Iranian scientist and engineers can be interviewed, whether the International Atomic Energy Agency (IAEA) is up to the challenge, and the duration of the deal’s various provisions. My experience over several decades of conducting and observing verification activities is that these concerns, while important, are secondary in assessing whether effective verification is possible.

During the depths of the Cold War, the United States and the Soviet Union had nuclear capabilities that could destroy each other many times over. To begin to pull back from this frightful brink, they negotiated a series of arms-control agreements. With the very fate of civilization riding on compliance with these agreements, verification of treaty commitments became a serious concern. The gold standard for acceptable verification has four requirements:

1. Clear, explicit and measurable objectives, whether it be numbers of missiles, bombers, warheads or troops deployed in given areas;

2. Assurance that any undetected cheating under an agreement—and the United States certainly assumed the Soviets would cheat—could not yield a significant military advantage to the cheater;

4. Inspection provisions that gave each side the right to observe how the agreement was being fulfilled.

These same four requirements for verification should be found in the Iran deal if it is to be effectively implemented.

Are there clear, explicit and measurable requirements that Iran must meet under the deal? The provisions of the deal that require Iran to remove or restrict its capability to produce nuclear weapons include a series of very specific elements:

b. Restrict Iran for the next fifteen years to only 5,060 centrifuges used to enrich uranium. All of these are to required to be Iran’s oldest and least-capable type of centrifuge, the IR-1. Iran currently has about 18,500 IR-1s deployed in Natanz and the underground facility at Fordow. (It also has 1,400 more advanced and capable centrifuges.) These 5,060 centrifuges are restricted to only limited low-enrichment work at the above ground facility at Natanz. The net result is that Iran goes from having almost twenty thousand centrifuges available for enrichment to only slightly more than five thousand of its oldest design and these deployed at an above-ground facility.

c. Iran’s advanced heavy-water reactor at Arak was about to enter service and would have provided Iran with what it had previously entirely lacked, a source of plutonium. Plutonium is a far better material for constructing nuclear weapons than enriched uranium, allowing smaller, more powerful warheads that are easier to fit onto ballistic missiles. The deal requires a redesign of the Arak reactor to make it less able to produce weapons-grade plutonium and requires that all of the spent fuel from this reactor must be sent out of Iran for the entire duration of the reactor’s lifetime. In addition, the existing head of the reactor will be removed and filled with concrete, thus ensuring that it can never be used.

There are other commitments made by Iran under the deal mostly related to permitted research and development activities and uses of the underground facility at Fordow, but the key requirements that are designed to remove Iran’s ability to acquired a nuclear weapon while the deal is in effect are these three. And these three meet the test of being clear, explicit and measurable.

Could Iran still cheat under this agreement—and, most importantly, would any such cheating yield Iran any significant military advantage?

The history of post–World War II arms-control agreements with the Soviet Union is filled with examples of cheating on commitments. In every case, even when the violations remained undetected for years, as was the case with chemical and biological weapons, this yielded the Soviets no real military advantage.

The United States and its allies maintained a substantial military force that assured that any Soviet cheating on the margins of arms-control agreements would not give it a real edge. The United States and its regional allies now have a quantitative and qualitative military superiority over Iran. As long as this superiority is maintained, any undetected cheating by Iran—and I am convinced there will be some—will not allow Iran to acquire a nuclear weapon or otherwise gain a military advantage. Iran, if it is believed to be cheating on its obligations under this deal, will discover that the United States and our regional allies can, with relative ease, further escalate our military advantage and leave them in far worse circumstances—just as the Soviet Union discovered.

The fourth, and final, requirement for verification is on-site inspection capable of monitoring compliance with the deal. This task is assigned to the International Atomic Energy Agency and its core of nuclear safeguard inspectors. With regard to Iran’s declared nuclear activities, there can be little doubt that the IAEA inspectors can be effective. They carry out many of the same duties in countries, such as Japan, with far larger nuclear-enrichment enterprises and states, such as South Korea and Indonesia, with larger research reactors. This is not to say that it will be an easy task or without challenges. Iran is a security and surveillance state that knows how to closely monitor and pressure its own citizens as well as foreigners. International inspectors will be at the focal point of Iran’s security apparatus.

The more difficult inspection tasks will relate to undeclared, most likely military-related facilities where Iran is most likely to engage in prohibited activities. The deal attempts to provide inspectors with the rights to pry open these facilities, but the procedure set out in the deal is far from ideal and will be a slow and cumbersome process that could take more than 3 weeks (at best) to gain the right to enter such locations.

Fortunately the laws of physics give the inspectors a substantial advantage here. Any activity that involves the use of nuclear materials—and these are the types of activities that might give Iran a decisive jump on developing a nuclear weapon—leaves traces that are difficult to impossible to completely remove, and any attempt to eradicate such signatures is itself easily detected. On the other hand, there are computer simulations and other calculations related to nuclear-weapons development that leave few to no signs and could even be missed by inspectors with unlimited rights of immediate access. Such activities, however, will not provide Iran with any substantial military advantage as long as it cannot gain the highly enriched uranium or plutonium needed for a weapon.

On its face the Iranian nuclear agreement meets all of the classic requirements for effective verification. Could it be better? Clearly, yes in several regards including the rights of access for inspectors to undeclared sites, a cumbersome dispute-resolution process, weak provisions for stopping the illicit procurement of technology and the end of uranium-enrichment restrictions after fifteen years.

This is an agreement where the United States and Iran have a deep, and in the near term, unbridgeable distrust and suspicion of each other. Considering that the negotiations involved five other nations and the European Union, probably nothing better was achievable. Even with its limitations the deal will be able to work—if there is constant diligence and attention on the part of the United States and its international partners to what is required for effective verification.

Can the deal prevent Iran from cheating on some of its obligations? No. Will it detect all of Iran’s cheating? Unlikely. Will Iran gain any substantial military advantages if it cheats? No, and it will end up facing even greater military and economic disadvantages if it does engage in substantial cheating.

The greatest threat to the Iranian agreement is what opponents desired and what its advocates now trumpet as its great advantage—time itself! The major provisions of this agreement will run from ten to twenty-five years. How can binding Iran to such long-term restraints on its nuclear activities be a challenge?