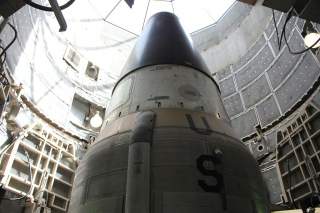 In the rancorous aftermath of the 2016 presidential election, Russia is often depicted as the greatest national-security threat facing the United States. The intense heat generated by the current scandals, however, is blinding us to the fact that cooperation with Russia on nuclear issues is still very much in America’s interests. As a result, according to the esteemed Bulletin of Atomic Scientists, the threat of nuclear war between our two nations is now the highest it’s been since 1953.

Unfortunately, from his denouncement of the 2010 New START treaty to his “let it be an arms race” comment on MSNBC, President Trump has demonstrated a remarkable insouciance to the nuclear threat.

Rather than engaging in nuclear saber-rattling, the Trump administration should widen and deepen its nuclear cooperation with Moscow. Here’s how it could do so.

First, Washington should heed the call by Russia’s deputy foreign minister to restart communications channels between the two governments—especially the military-to-military cooperation largely frozen since Russia’s 2014 annexation of Crimea. As much as Putin is criticized—and certainly in some cases rightfully so—the West is as much to blame as Russia for the breakdown in communications.

Since Russia’s membership in the G-8 was revoked in March 2014, Moscow has also been excluded from G-8 initiatives like the Global Partnership against the Spread of Weapons and Materials of Mass Destruction, a partnership that is clearly as much in America’s interests as it is in Russia’s.

Recently, a senior NATO official boasted that the alliance was supporting Ukraine by stopping all “practical cooperation with Russia,” while U.S. defense secretary James Mattis rejected Russia’s offered to restart military-to-military relations. Meanwhile, Moscow has declined to attend the 2016 Nuclear Security Summit, and ended its longtime nuclear security cooperation with the United States.

The problem with this breakdown in communications is that it greatly increases the risk that a minor military incident in Europe or elsewhere could rapidly escalate into a full-scale war—up to and including a nuclear exchange. Ironically, Russia’s conventional weakness vis-à-vis the United States—and its concomitant “escalate to de-escalate” nuclear doctrine—increases the chance of such a disaster. In the current environment of heightened threat perceptions, to refuse any opportunity for communication is like cutting off one’s nose to spite one’s face.

In addition to restarting regular military-to-military communications with Moscow, Trump should accept Putin’s offer to extend the New START. New START limits both sides to a total of seven hundred ICBMs and 1,550 deployed warheads, which is still more than enough to destroy each other and the planet many times over.

New START also possesses many valuable verification measures. Each side is permitted up to eighteen short-notice on-site inspections each year, as well exchanges of telemetry and other data. The treaty also established a Bilateral Consultative Commission to meet at least twice a year in Geneva. Both are critical confidence-building measures that reduce the risk of surprises and misunderstandings. Put simply, extending New START is in America’s national interest because it reduces the risk of nuclear war. Putin’s offer to extend it without any reported preconditions is a pleasant surprise that Trump and Congress should accept.

But we should also look beyond New START, and begin discussions on a follow-on treaty that would include both further reductions in nuclear weapons, as well as a commitment by each side to reduce the number of missiles on so-called “hair trigger alert” or “launch-on-warning” status. These are security postures that permit the launch of missiles within fifteen minutes or less. Their purpose is to dissuade the other side from launching a first strike—but they also dangerously increases the possibility of an accidental nuclear exchange.

This is no idle risk. In 1995, for example, Russian early-warning radar operators mistook the launch of a Norwegian scientific rocket for an American submarine-launched ballistic missile. In response, President Boris Yeltsin activated his “nuclear football” in preparation for retaliatory strikes before the Russians figured out it was a false alarm. Likewise, in 2010 an American nuclear launch control center in Wyoming lost contact with fifty of its Minuteman III ICBMs for over an hour.

And if the risk of accidentally destroying each other is not enough, both sides might consider that China’s military also wants to move 150 of its missiles to hair-trigger-alert status. With tensions in northeast Asia escalating, the last thing the world needs is another great power playing dangerous nuclear games. The best way to talk Beijing down from this course of action would be if Washington and Moscow took some of their own missiles off hair-trigger alert.

Finally, the Trump administration should try to restart programs designed to improve nuclear security—including preventing nuclear terrorism—frozen since the beginning of the Ukraine crisis.

As a report last year by Harvard’s Project on Managing the Atom explains, the CIA believes that making a crude nuclear device could be “well within” Al Qaeda’s capabilities if it obtained the needed Highly Enriched Uranium (HEU). One potential source of HEU is Russia but, thanks to the cutoff in communications between U.S. and Russian nuclear scientists, we are now much less informed about the state of Russian nuclear security than before.

Luckily for both sides, there is a precedent for successful nuclear security cooperation. It is called the Cooperative Threat Reduction program, and was set up after the breakup of the Soviet Union to help Moscow secure its nuclear facilities and fissile material. At a recent conference chaired by former senator Sam Nunn and former Russian foreign minister Igor Ivanov, participants recommended eleven nuclear-security projects that both sides could equally fund, involving everything from securing radioactive materials and HEU in Kazakhstan and Central Asia to preventing the illegal trafficking of nuclear and radioactive materials. All of these would significantly enhance U.S. national security.

While restarting comprehensive nuclear-security cooperation with the Russians would clearly serve American interests, it is unlikely to occur in the current atmosphere of mutual acrimony. Overcoming it will require that both sides isolate nuclear cooperation from the vicissitudes of the U.S.-Russian political relationship. The potential cost of not doing so is simply too great.

Nicolai N. Petro is Silvia-Chandley Professor of Peace and Nonviolence at the University of Rhode Island. Josh Cohen is a former USAID project officer involved in managing economic reform projects in the former Soviet Union. He contributes to a number of foreign-policy-focused media outlets.