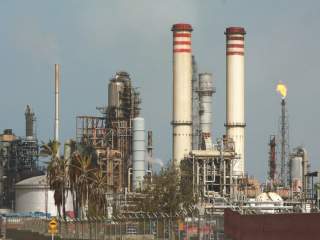 The slow-motion economic collapse of Venezuela has been well documented in the media. The steep drop in global oil prices has exacerbated the impact of years of economic mismanagement by the socialist, anti-American regime of Hugo Chávez, and his successor Nicolas Maduro. Their populist, statist policies are no longer affordable for Venezuelans, nor for the nations in the region that have become reliant on Venezuela’s oil largesse.

Many countries in the Caribbean and Central America have enjoyed cheap oil under Venezuela’s Petrocaribe program, which offered preferential prices to neighbors as a way to spread Caracas’s influence and socialist agenda. As that policy has become increasingly unsustainable, and Petrocaribe countries seek to detach themselves from Venezuela’s sinking economy, the United States and its regional partners confront a moment of significant strategic risk, as well as opportunity.

The United States can help its Caribbean and Central American neighbors break their dependence on Venezuela and the failed policies of Chavismo. Alternatively, it can stand by and let Venezuela’s economic collapse spread instability throughout a region that has represented a rare bright spot of relative peace, government reform and stability in recent years. Such a laissez-faire approach would risk creating yet another security crisis that the United States can ill afford amid widespread global unrest.

U.S. policymakers have long relegated relations with Latin America and the Caribbean to second tier status, behind what often seem more pressing foreign policy challenges in the Middle East, Asia and Europe. Given the proximity of these countries and their common interests, the U.S. government can no longer afford to ignore what can be described as “America’s third border.” Along with Mexico and Canada, the countries of Central America and the Caribbean have direct and powerful ties to the United States in terms of immigration and trade. Instability or crises in any of these countries impacts the entire region, and directly challenges U.S. interests. As we have seen with the spread of transnational trafficking organizations, narcoterrorism and, more recently, the Zika virus, the increasing interconnectivity of this hemisphere requires American countries to confront challenges together.

Caribbean and Central American leaders were in Washington last week for the U.S.-Caribbean-Central American Energy Summit, hosted by Vice President Joe Biden. With Venezuela’s socialist and populist experiment failing spectacularly, the conference presented an excellent opportunity to demonstrate how U.S. energy production and technology can steer the region away from reliance on Venezuelan oil, and help wean the Petrocaribe nations off their dependence on Venezuelan largesse, which distorts markets and stymies needed political reforms. These countries will also need assistance and understanding from the United States, regional, and international organizations and financial markets, as they handle the significant debts resulting from their energy shortfalls and reliance on Venezuela.

To enable this transition, the United States, Canada and Mexico should better integrate their energy economies with that of the wider region. Already efforts are underway to integrate the Central American electrical grid with the rest of the region, to further develop the energy industry in Colombia, and to better coordinate and integrate oil production and the refining of petroleum products from fields in Canada, the United States and Mexico.

Another proactive initiative that would help wean these economies off of their dependence on artificially cheap Venezuelan energy would be to increase the production and export of North American natural gas, with the further development of Liquid Natural Gas (LNG) infrastructure as a key step. President Obama has pushed for the continued expansion of LNG export infrastructure in the United States, but the long-term development cycle and complexity of these projects means that the next administration will need to build on that foundation and further facilitate an increase in the production and export of liquid natural gas. During a presidential election year, the debate about U.S. foreign policy and national security should highlight the importance of LNG production and export to the country’s economic security, and that of its regional partners. A greater reliance on LNG is a strategic imperative in the Western Hemisphere, just as it is in eastern Europe.

In addition to the economic advantages of a broad scale shift towards liquid natural gas, there are environmental benefits as well. Every unit of energy generated by natural gas instead of by oil or coal represents a down payment on a cleaner atmosphere. While alternative energy sources certainly have a role to play in the overall energy equation, some element of fossil fuel will dominant for years to come. Natural gas is the best alternative. If the Obama administration emphasizes renewable energy at the expense of natural gas, the United States will lose its advantage in lessening the dependence of its Caribbean and Central American neighbors on Venezuelan oil.

Finally, with the United States serving as the primary energy partner for the region, as opposed to Venezuela, multilateral institutions in the region such as the Organization of American States may enjoy a renaissance. Petrocaribe nations no longer beholden to Venezuela’s energy bribery and corrupting influence will be more susceptible to democratic, human-rights and rule-of-law reforms that are transforming the governments of many of their neighbors for the better.

In a presidential election season, bipartisanship is often a rare commodity. Despite election-year pressures, however, efforts to wean the United States’ regional partners off Venezuelan crude and the corrupting influence of its populist socialism, and towards cleaner, securer liquid natural gas produced by the region’s leading democracies, is a goal that makes both economic and strategic sense. Everyone should be able to unite behind such a win-win proposition.

Senator Mel Martinez is a retired U.S. senator from the state of Florida. Ambassador Francis Rooney is CEO of Rooney Holdings, Inc. and a member of the Board of Advisors to the Panama Canal Authority. Both are Trustees of the Center for the Study of the Presidency & Congress in Washington, DC.