This Weapon Can Hit Baghdad From 200 Miles Away 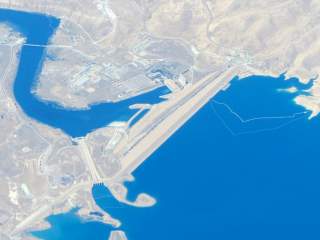 A lethal threat sits in Iraq right now, one that could kill hundreds of thousands of civilians with little notice. The weapon briefly fell into the jihadis’ hands last summer, and still poses a destructive risk to much of the country.

The 750-megawatt Mosul Dam is the country’s largest, and one of the most productive in the Middle East. But its proximity to Mosul, ISIS’s biggest Iraqi city, has caused nightmares in both Baghdad and Washington.

Built during the Saddam era on a weak foundation of gypsum, the dam requires continuous maintenance and reinforcement with fresh concrete. Without these efforts, some ten billion tons of water threaten to sweep down the Tigris, flooding towns and villages hundreds of miles downriver. Baghdad could see flooding of more than fifteen feet, according to one report. A U.S. Army Corps of Engineers study in 2006 called it “the most dangerous dam in the world” and estimates of the potential civilian death toll reach as many as half a million.

Recent years have not been kind to the dam. Earlier this month, the dam’s director acknowledged that fighting last year damaged the structure in several critical areas, which are now at risk of collapsing. Indeed, during the ten-day stint ISIS was in control of the dam in August 2014, the terrorist group even threatened to blow it up.

Kurdish fighters have since wrested control of the dam from ISIS, but occasional clashes have continued in its vicinity, keeping maintenance workers from fulfilling their duties. On December 16, the Italian prime minister—Italy has a stake in the dam—announced his country was deploying 450 additional troops to protect the structure. Meanwhile, the central Iraqi government in Baghdad has proved ineffective at securing the dam—just as its soldiers proved ineffective at defending the area against ISIS last year. Nonetheless, Kurdish officials are urging the cash-strapped government in Baghdad to outlay $250–500 million in order to mitigate disaster.

Baghdad is clearly aware of the risks: according to congressional testimony in September by Mercy Corps’ Michael Bowers, Iraqi Security Forces have urged the evacuation of villages in direct proximity to the dam.

As Western and regional powers attempt to defeat Islamic State and build a modicum of security in Iraq, they have been forced to focus on the immediate military threat posed by ISIS. But less headline-friendly threats clearly remain on Iraqis’ minds: last weekend, one of the contestants in the Miss Iraq pageant—the first since 1972—mentioned repairing the dam as a key national priority.

In the United States, debates over Iraq and the war against ISIS are often so broad as to have little use. Policymakers and pundits argue about boots on the ground and no-fly zones, rarely coming to any conclusion. But this is what fighting—and winning—looks like: small, unglamorous steps to preserve the very infrastructure of the nation, and keep it from being used as an instrument of terror.