Weaponized: The "China Card" Makes Its Return to U.S. Politics 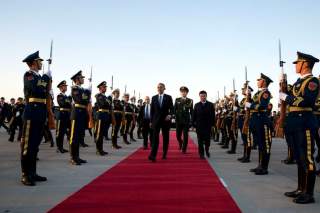 China has been “weaponized” in U.S. domestic politics.

This is evident in the current debate over the proposed Trans-Pacific Partnership (TPP).  For even though China is not a prospective member of the TPP, an incipient trade agreement among twelve Asia-Pacific nations, this has not stopped proponents and opponents of the deal alike from playing the “China card” when discussing the deal.  Not only has this tendency to weaponize China reduced the quality of debate over an important matter of public policy, but it also contributes to a growing risk that the U.S. is sleepwalking into greater confrontation with China—whether or not such confrontation is in the overall national interest.

Although the exact details of the TPP are yet to be finalized and made public, the emerging agreement’s broad purpose is to reduce barriers to free trade between twelve Asia-Pacific economies: Australia, Brunei, Canada, Chile, Japan, Malaysia, Mexico, New Zealand, Peru, Singapore, the United States and Vietnam.  Others may join the pact if it becomes operative.  Alongside the Transatlantic Trade and Investment Partnership—a proposed free trade agreement between the U.S. and Europe—the TPP has formed a centerpiece of the Obama administration’s international economic policy.  Indeed, despite governing during a time of unprecedented global economic crisis, Obama’s relatively robust defense of an open economic order stands out as a major (even if under-celebrated) foreign policy achievement.

The TPP has proven controversial in domestic politics, however.  In part, opposition to the agreement is based upon the usual protectionist arguments: that open economies can be bad for U.S. workers and businesses; that free trade induces a “race to the bottom” in terms of employment and environmental regulations; and that the neo-liberal model of globalization promotes unacceptable levels of inequality even as it boosts aggregate national wealth.  There is also specific opposition to the reported inclusion of investor-state dispute settlement mechanisms in the TPP, provisions that would force national governments to bow to the rulings of international arbitral tribunals and thus are characterized as undermining U.S. “sovereignty.”

The Obama administration and other TPP proponents have attempted to justify the deal—sometimes explicitly, usually implicitly—as a way to balance against China’s growing influence in the Asia-Pacific.  When Obama insisted in his last State of the Union address that the United States should be writing the rules of international trade instead of allowing China to assume that role, for example, he was referencing the domestic debate over the TPP.

According to this view, the United States and China currently are embroiled in a contest over the future shape of the international order, a struggle in which the Asia-Pacific region constitutes the frontlines.  Adopting the TPP is a way to isolate China, boost the economies of the United States and its allies at the expense of the Chinese economy, and institutionalize U.S. leadership of the Asia-Pacific and the wider world—effectively insulating America from the worst excesses of China’s rise.

Yet China is also the bogeyman for opponents of the TPP.  The deal’s Democratic detractors, in particular, have raised the specter of China when launching their criticisms of the TPP and free trade more generally.  As The National Review’s Kevin Williamson points out, anti-Chinese remarks—and, indeed, some specific anti-Chinese foreign policy proposals—have been integral components of the Democratic bid to derail the deal, including machinations by leading Democrats like Chuck Schumer.  Williamson might be overstating the case when he points to a resurfacing of the “Yellow Peril” scaremongering of old, but he is surely correct to highlight the way in which politicians like Schumer are linking U.S.-China relations to the TPP.

Political scientists Peter Trubowitz and Jungkun Seo write about this phenomenon of weaponizing China in a 2012 article, “The China Card: Playing Politics with Sino-American Relations.”  The authors argue that political entrepreneurs inside the United States have sought to exploit fissures in the U.S-China relationship for partisan gain at various points in history, particularly during the 1870s, 1950s and 1990s.  In short, the “China card” has long been used by politicians to embarrass sitting presidents, split opposing parties and win over swing voters.  It is thus nothing new for China to be used in U.S. domestic politics as a “wedge issue” for short-term advantage.

Today, the China card is being played once again.  Interestingly, though, it is being played by politicians from both parties.  Some (primarily Democrats) seek to associate China with the downsides of economic openness—outsourcing jobs, declining living standards, rising inequality and so forth—while others (mostly Republicans, but also the Obama administration in the case of the TPP) implicitly cast China as a geopolitical foe, a rival that ought to be contained using the full array of foreign policy tools: diplomatic, military and economic.  Either way, China is a threat.  Few and far between are those willing to speak in favor of a strong U.S.-China partnership.

It is nothing new to lament that the debate over the TPP has been muddied by unhelpful references to China.  The Economist, for example, predictably has insisted that the TPP be evaluated on its merits as a free trade deal, not as a geopolitical anti-China pact.  But the weaponization of China has continued unabated.

Meanwhile, the destructive effects of weaponizing China go far beyond the debate over free trade.  Over time, relentlessly negative rhetoric about China will accumulate and solidify.  Anti-Chinese images will become hardened fixtures of the U.S. political landscape, topographical features of the political environment that will make conflictual U.S.-China relations much more likely to occur in the future.  Should subsequent generations of U.S. leaders ever seek to build domestic support for cooperative relations with China, they will face an uphill struggle.  An anti-Chinese institutional bias is congealing.

The U.S.-China relationship will be the most important bilateral relationship of the twenty-first century.  As of today, it is unclear how the relationship will unfold.  But if the United States wants to maximize its ability to shape the development of its relations with China—as opposed to railroading itself into a particular course of action—then great care must be taken not to prejudice the domestic political system against cooperation with China.  In this sense, the current debate over the TPP, in which China has been weaponized and cast as villain by both sides, stands out as an excellent model of “what not to do.”  Prudent statecraft requires that politicians on either side of the aisle acquit themselves with much greater attention to the long-term effects of their partisan politicking.