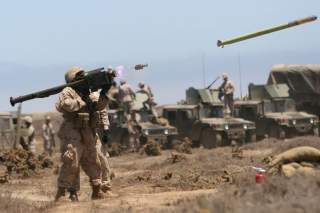 The use of ground-based missiles to engage planes and defend air space is a relatively recent phenomenon. First explored by Germany in World War II, all the major powers quickly raced to develop them in the postwar period. The first confirmed kill by a surface-to-air missile was in 1959.

The size and scope of surface-to-air missile (SAM) systems, which restrict vehicle-mounted SAMs to standing armies, means that their use was restricted to conventional wars. As a result, SAM use has been generally infrequent, with the exception of the Arab-Israeli Wars, the Vietnam War, and other conflicts with conventional forces on both sides.

The rise of man-portable air defenses (MANPADS), shoulder-fired systems capable of engaging low-flying aircraft, has extended their use to guerrillas, terrorists, and other nonstate actors. These highly mobile, concealable missiles have been used to target both military and civilian aircraft, in war and peacetime. The proliferation of MANPADS is on a troubling uptick, as instability in Syria and Libya cause both to lose control of their missile arsenals.

There are two ways we could measure overall air defense missile lethality: by number of aircraft actually shot down, and by estimated effectiveness. For the purposes of this article, we’ll use both. Thanks to advances in electronics, missiles are always getting more effective and can defend against many different air-based threats, so it would be easy to load up the list with the latest and (theoretically) best systems. That, however, would neglect some older missiles that have proven effective in the past.

First mention on this list goes not to the most modern missile, but the longest lived. Designed in 1953, the SA-75 “Dvina” surface-to-air missile has been in continuous operation worldwide for more than fifty years.

Originally a fixed air-defense system to counter fast, high-altitude American bombers, the SA-2 was a mainstay of Voyska PVO, the Soviet Air Defense arm. A long, two-stage radar-guided missile, the SA-2 used the P-12 early warning radar (NATO name: “Spoon Rest”) and the RSN-75 “Fan Song” missile control radar. In 1959 the S-75 “Desna” mobile variant became operational, and an improved version, the S-75M “Volkov” was deployed in 1961. “Volkov” could engage targets from 7 to 43 kilometers to an altitude of 98,000 feet.

Exported by the Soviet Union, the SA-2 Guideline served in the vanguard of socialism from Cuba to Mongolia. The SA-2 participated in the Six-Day War, the Vietnam War, the Yom Kippur War, the Iran-Iraq War, the 1991 Gulf War, the Yugoslavian Civil War, and the War in Abkhazia. The SA-2 scored the first ever air defense missile kill, shooting down a Taiwanese RB-57D reconnaissance plane over China in 1959. A salvo of three SA-2s brought down CIA pilot Francis Gary Powers and his U-2 spy plane over Sverdlovsk, Russia in 1960.

The SA-2 formed the backbone of North Vietnam’s high and medium altitude air defense, where it was known as the “flying telephone pole” among American pilots. North Vietnam reported a staggering 5,800 SA-2 launches which downed a total of 205 American aircraft. In 1965 SA-2s scored one hit per fifteen launches; by 1972, due to American advances in tactics, electronic warfare and defensive systems, the ratio had worsened to one hit per fifty launches.

The SA-2 still serves in twenty countries, often modernized to extend service life. The system’s latest kill is thought to be in 1993, against a Russian Su-27 Flanker in the Abkhazia War. A half-century reign of effectiveness on the modern battlefield is no mean feat.

The SA-7 Grail is the AK-47 of air defense missiles: cheap, lightweight and prone to falling into the wrong hands. The first generation of Soviet man-portable air defense missiles (MANPADS), the SA-7 is a twenty-one-pound missile contained in a launcher the length and width of a rolled-up movie poster. Supersonic, the SA-7 is capable of a maximum speed of 1,260 miles an hour with a range of 14,750 feet.

The SA-7 was meant to provide air defense against low-flying NATO attack aircraft. It was liberally issued to frontline Soviet Army units: motor rifle (mechanized), air assault, naval infantry and engineer companies were all equipped with an SA-7 firing team. A NATO aircraft flying over a Soviet battalion would cross paths with as many as three SA-7s.

That sort of battlefield saturation was necessary because, like all first generation MANPADS, the SA-7 was relatively primitive. Egyptian troops during the 1969-1970 War of Attrition scored 36 hits out of 99 launches, including possibly the first MANPADS intercept ever of an Israeli A-4 Skyhawk. The missile’s small warhead meant most planes were only damaged, not shot down, and training and aircraft modifications dramatically lowered the missile’s effectiveness during the 1973 Yom Kippur War.

Like other first generation MANPADS, a major downside of the SA-7 was the infrared guidance system, which needed to lock onto the hot exhaust of an aircraft. The SA-7 was only capable of locking onto the tail of an aircraft as it was departing the battlefield—after it had expended its ordnance. The Afghan mujahedeen fighting Soviet occupation forces during the 1980s disliked the SA-7, claiming it would rather lock onto the sun than the exhaust of a jet or helicopter.

In addition to standing armies, the SA-7 has been employed by terrorist and insurgent groups around the world, from Syria to Northern Ireland and Spain. Rebel groups in Syria are reported to be armed with SA-7s captured from the regime, and at least one was launched at an Israeli helicopter over the Gaza Strip in 2012. During the Rhodesian Bush War, two Air Rhodesia airliners were shot down by rebels armed with SA-7s.

A veteran of conflicts in Europe, Africa and the Middle East, the SA-6 Gainful came to prominence in the 1973 Yom Kippur War. The SA-6 is a radar-guided missile mounted on a tracked launcher. The SA-6 has a remarkably large engagement envelope for a missile designed in the late 1950s, capable of intercepting aircraft at ranges from 2.5 to 15 miles, and from 164 to 45,000 feet.

The SA-6 became famous during the 1973 Yom Kippur War, when Egypt invaded the Sinai Peninsula. The Egyptian military had up to 32 SA-6 batteries and used them to cover the advance of the Egyptian Second and Third Armies. A new system not previously encountered by the West, SA-6 radar emissions could not be detected by Israeli Air Force radar warning receivers.

The Israeli Air Force, caught unprepared by the Arab armies’ surprise attack, was unable to suppress enemy air defenses before going into action. In the first three days of war the IAF lost nearly fifty planes, most to the SA-6. The SA-6 was so effective that by the third day of the war the Israeli Air Force commander ordered aircraft to stay away from the Suez Canal unless absolutely necessary.

The IAF had assumed the role of “flying artillery” for the Israeli Army, and the SA-6 in many cases prevented Israeli ground forces from being supported by air. The SA-6 continued to be a threat until Egyptian air defenses were dismantled by a combination of air attack and the Israeli counteroffensive. By the end of the war the Israeli Air Force lost an estimated 40 F-4 Phantoms and A-4 Skyhawks to the SA-6 (not counting other missiles or anti-aircraft artillery) or about 14 percent of the IAF’s inventory of both planes.

The SA-6 has served in nearly thirty countries, and still serves with twenty-two. The threat the SA-6 poses to Western aircraft was diminished considerably after captured missiles were analyzed and countermeasures against them devised. The SA-6 has shot down two American F-16 Vipers, one over Iraq during the 1991 Gulf War and another over Bosnia in 1995. The SA-6’s most recent “kill” was in a friendly fire incident in Poland in 2003, when a Polish missile battery accidentally shot down a Polish Air Force Su-22 Fitter attack jet during exercises.

The Stinger missile is typical of the second generation of MANPADS. The Stinger made its name in the mountains of Afghanistan, where it was highly effective against Soviet helicopters and aircraft, and its use may have shortened the war.

Like the SA-7, the Stinger was designed for American ground forces to defend themselves from enemy ground attack aircraft. Unlike the SA-7, the Stinger has an “all-aspect” engagement capability—that is, it can detect and launch against aircraft at all angles, not just from the rear. This finally gave American air defense teams the ability to shoot down an enemy aircraft before it made an attack run, or force an aircraft to abort a run.

Newer versions of the Stinger incorporate a dual-seeker operating in the infrared and ultraviolet bands. Infrared countermeasures that formerly worked to confuse infrared seeking missiles, such as flares, don’t work in the ultraviolet band. Stinger has a large warhead than previous generation missiles, making it more likely to actually down tactical aircraft instead of merely damage them.