Wearing a Face Mask Is Patriotic 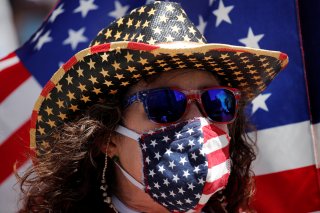 When I first learned about the great public-health benefits of donning face masks, my instinct was to call on the government to mandate that people wear them in public. And, as with all laws that concern saving large numbers of lives, I initially felt that the people who refused to wear masks should be fined, if not arrested.

I felt that way because of the strong evidence that shows the effectiveness of masks in preventing the spread of the coronavirus, also known as COVID-19, and other viruses. Wearing a mask mainly serves to prevent those who are infected with a virus from passing it on, rather than preventing people who cover their faces from becoming infected. Dr. Joseph Vinetz, professor in the infectious disease section at Yale School of Medicine, explained: “They prevent somebody, when they talk or sometimes when they sneeze or cough, from expelling virus and leading to infection in other people." One reason the coronavirus has been hard to control is that people can infect others before they start developing symptoms. Hence the importance of using masks at all times, even if the person wearing it does not feel sick.

Wearing masks had been widely accepted in Eastern Asia prior to the coronavirus. “It was largely the shock of SARS that shaped this local etiquette,” according to Ria Sinha, a senior research fellow at the University of Hong Kong’s Center for the Humanities and Medicine. “For example, in Hong Kong, only four confirmed deaths due to COVID-19 have been recorded since the beginning of the pandemic, despite high density, mass transportation, and proximity to Wuhan. Hong Kong’s health authorities credit their citizens’ near-universal mask-wearing as a key factor (surveys show almost 100 percent voluntary compliance).”

Studies show that if 80 percent of people wear masks that are 60 percent effective, easily achievable with cloth, the infection rate of the disease can greatly decrease.

I changed my mind once it became evident that masks have been caught up in the ideological and political struggles that divide the nation. “Face coverings . . . have emerged as a political Rorschach test. Republican leaders are less likely to mandate them, and Republican voters are more likely to forgo, and even scorn them.” Ohio Gov. Mike DeWine quickly backed down from an order requiring face masks to be worn in stores because many in his state considered the requirement “one government mandate too far.” A Gallup poll found that 75 percent of Democrats reported wearing a mask outside their homes in the previous seven days, compared with 48 percent of Republicans.

I now believe that we need to go back to the drawing board, and seek to reframe the public discourse about masks, not as a matter between the government and the citizenry, but as a dialogue among the members of local and national communities. Wearing a mask must be considered an act of caring about others, about those you love, your family, friends, community, and yes the nation. Not wearing it must be viewed not as a rebellion against authority, but as a selfish act. Putting a mask on should be seen as a sign that one is a good American. (If some people wish to write MAGA on their masks, and it helps them get on board, so be it.)

Social pressure can become the main tool of ensuring adherence to the new social norm, just as we got our fellow Americans not to smoke in public, a pro-social healthy habit that is almost completely socially enforced. (Note that this is despite the fact that the detrimental health effects of secondary smoking are much lower than those of the coronavirus.) Providence, Rhode Island Mayor Jorge Elorza put it well: “You should socially shame them, so they fall in line.” He added that there are not enough police officers to enforce the new regulations, so it’s up to the people of the community to ensure their neighbors are following the rules. “We need people to self-police.”

Some oppose shaming, which they consider a way of stigmatizing people, demeaning them. One must ask them: What would they do instead? Arrest people—or let the pandemic rage?

A substantial portion of the right has turned hard against science as if knowledge were somehow disqualifying. Many on the right are extending the culture war to matters of public health, with health experts cast as “deep state” operatives sabotaging the president.

As I see it, it is morally wrong and politically unwise to write off these millions as “uneducated whites” “rednecks,” not to mention to characterize them as “deplorables.” We need to call on the people who make persuasive ads, the Madison Avenue mavens, and those experienced in public education, to launch a major campaign to win people over in accepting the facts of life. It is not a matter of simply sharing information; it is a matter of presenting information in ways that are persuasive, for instance, by drawing on those figures that can speak to Americans who are lost but need to be found. The fact that the president does not wear a mask is particularly detrimental to this public education drive. However, there are other people who can be called upon, such as folk-country singers, sports idols, and members of the clergy. Several celebrities and influencers have already joined the #Maskingforafriend campaign. They are posting selfies and positive messages about wearing masks to help to normalize it.

Gallup polling since April 7 finds the percentage of Americans who report that they have worn a mask on their face outside of their homes has increased from 38 percent to 62 percent. These numbers are both very encouraging and point to the fact that we have quite a way to go.

The challenge, I hate to admit, is even greater. Sadly, the pandemic highlighted, in a most dramatic way, the fact that whatever ills our nation faces, fall especially hard on minorities and the poor. Treatment is more available for those who are wealthy or who are white than for others—including the enforcement of using masks. In New York City, increased monitoring by police led to some officers handing out masks to white sunbathers while others arrest black Americans for code violations.

Relying mainly on social pressures will alleviate this problem to some extent but America must find ways to address its societal inequities as well—both to advance social justice and because the virus will not otherwise be contained. The presidential campaigns of Bernie Sanders and Elizabeth Warren, and their effects on Democratic nominee Joe Biden’s agenda, show that Americans are beginning to realize this truth.

One may respond to my communitarian argument that we ought to rely on our fellowship rather than on police by suggesting that this approach will cost a large number of lives until millions of Americans come around to don masks. They might hold that the police should at least issue citations to those who rebel. The best I can say is that we should at least first try to educate before we coerce.

Additionally, the media reports that some shoppers have violently attacked workers who asked them to wear masks inside their stores, which their state laws require. The response to these attacks requires no complex deliberations. These attackers should be handled like any other person who assaults another. And if the police do not react, then they take this country one step closer to the lawless wild west.