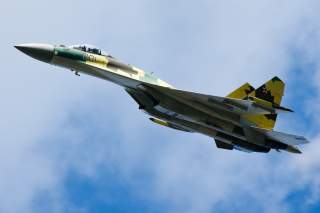 As if more evidence were needed that the United States and Russia have indeed embarked upon a New Cold War, the news comes that Russia has revised its military doctrine for the first time since 2010.

Decrying what it sees as Western efforts to turn Ukraine into a "front line of confrontation,” the revised doctrine would allow for Russia to deploy precision conventional weapons “as part of strategic deterrent measures” against what it sees as its principal threat: NATO. According to the document “the expansion of NATO’s military infrastructure to the Russian borders” poses a significant threat to Russian security. The doctrine also allows for the use of tactical nuclear weapons in the case of a conventional attack that “threatens the very existence” of the Russian state.

No one deserves to be surprised by any of this. As far back as 1993, in the first post-Soviet iteration of the doctrine, Russia renounced its “no first use” policy regarding tactical nuclear weapons if faced with a large-scale attack that posed an existential threat to the state. Around the time of the first round of NATO expansion in and around 1996-7, Russia’s National Security Concept continued to retain “the right to use all forces and means at its disposal, including nuclear weapons, in case an armed aggression creates a threat to the very existence of the Russian Federation as an independent sovereign state.”

In 2000, no doubt spurred on by NATO’s 78-day bombing campaign over Serbia the year before, Russia, now under Mr. Putin, again revised its military doctrine. According to Nikolai Sokov of the Monterey Institute of International Studies, the 2000 iteration of the doctrine broadened the scenarios in which Russia could conceivably deploy nuclear weapons, including:

...armed conflict (primarily ethnic or religious in origin, waged inside the country; other states might be involved indirectly);local war (one or several other states as opponents; the scope and goals of the conflict are limited);regional war (attack by a state or a coalition of states pursuing significant political goals); and global war (attack by a coalition of states; survival and sovereignty of Russia are at stake).

Russia seemed to climb down from its nuclear-heavy posture in 2010, setting what some analysts saw as a “higher bar” for nuclear escalation than was set forth in the 2000 Doctrine. But 2010 was an altogether different time—the apotheosis of the “reset” period that saw the signing of the New START treaty followed by the passage of United Nations Security Council Resolution (UNSCR) 1929, which signaled greater U.S.-Russian cooperation regarding Iran.

Some analysts have noted that the current budget squeeze resulting from the price of oil will force the Russian Defense Ministry to slash its operating budget. Contemplating such a cut in Russia’s conventional forces made Forbes’ Tim Worstall positively gleeful, noting that “it’s always a source of amusement that the aircraft carrier cannot go anywhere outside of Russian territorial waters without a deep sea tug to deal with the likely occasion of the engine breaking down.” Perhaps. Yet we might want to hold off on the schadenfreude; after all, a cut in conventional-weapons expenditures will likely increase Russia’s reliance on its nuclear deterrent, which is a development no one should welcome.

Meanwhile, a dispiriting picture of the administration’s acrobatics with regard to its Russia policy comes courtesy of Bloomberg’s Josh Rogin. Rogin cites administration officials who—presumably with straight faces—report on the behind-the-scenes efforts to engage Russia on issues as diverse as Iran, Syria, the IS Group and North Korea, all the while adding more and more names to the Magnitsky List and threatening further sanctions.

Missing of course from the administration’s reckoning is any awareness that the events of the past month have conspired to shape the Russian government’s threat perception. Leaving strict causality aside, the trend of recent events has ominous portents. Consider. In the weeks leading up to the announcement of Russia’s revised military doctrine, Kiev abandoned its nonaligned status, paving the way for a bid to join NATO; the value of the Russian ruble declined precipitously, prompting a steep rise in interest rates and a concomitant upward pressure on prices; and President Obama signed into law a bill under the cynical moniker of the Ukrainian Freedom Support Act (H.R. 5859), which, among other things, provides for $350 million in military aid to Kiev.

And according to Rogin’s estimable report, there was not a word about any of this from either the administration or from the hearty band of neo-Cold Warriors on Capitol Hill, many of whom, like John McCain, believe that Obama’s Russia policy is a “strategy worthy in the finest tradition of Neville Chamberlain.” Rhetoric such as this has become a specialty of the Honorable Gentleman from Arizona, but it never seems to occur to McCain and like-minded neocons that crying “Munich!” over and over again is a weak substitute for an actual policy. Worse, it has contributed mightily to one of the principal tragedies of the past year: a revanchist Russia has now become a self-fulfilling prophesy.