Welcome to the Coronavirus Cold War 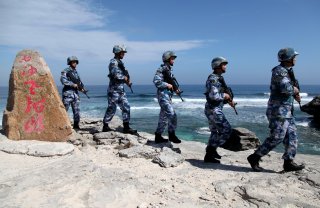 China has quite shamelessly used its infamous Nine-Dash Line to justify bullying its smaller weaker neighbors, attempting to seize economic control of valuable undersea assets. It has also behaved badly in other ways, creating and militarizing artificial islands to seize strategic control of the South China Sea (SCS) in support of its geopolitical struggle with the United States.

Liberal democracies now take the view that changing political boundaries by main force is no longer legal, whereas China believes it is simply restoring the historical status quo ante. But the behavior of the United States is hardly less provocative: the Chinese economy relies upon freedom of navigation through the SCS, just as much as other economies, so the U.S.-led freedom of navigation operations seem to be more about preserving U.S. military dominance and keeping China in its place.

The United States seems determined to preserve its regional maritime hegemony, whatever the consequences, but its military advantage over China is clearly declining in relative terms, and China can afford to play a long game.

The ASEAN countries, especially those coastal to the SCS, have limited options, though they are trying to achieve a little more autonomy by expanding their maritime forces. But a general arms build-up in the SCS is hardly conducive to peace and good order, and all parties should consider their common interests in preserving a stable security environment.

The United States and China should, therefore, refrain from any further saber-rattling, and instead work together to resolve their differences within existing international legal and security protocols, and if these are inadequate then new ones should be negotiated: it does not help matters that the United States has not ratified the United Nations Convention on the Law of the Sea.

As a regional middle power, South Korea is advocating balanced and constructive policies, without prejudice to any country, and is demonstrating its successful measures against the coronavirus pandemic during the past couple of months that world nations can have some lessons restored and the threat of serious physical conflicts in the SCS can be reduced.

The ongoing coronavirus pandemic is a novel factor impacting the maritime disputes in the SCS. The navies of the two great powers, the United States and China, have been directly affected, by having to demonstrate their ability to manage this insidious threat. And there has also been an indirect geostrategic effect arising from the entanglement of military, economic, and public health issues, with both countries playing the blame game and attempting to rally domestic support through conspiracy theories.

Theoretical analysis of middle powers has generally been skeptical about the extent of the leverage which they can exert to influence the great power game, but in 2020 we have seen a situation where South Korea has been admired in almost every country around the world, including in China and the United States, by the common people, and by many of the political leaders, for its strikingly successful response to the coronavirus global pandemic. Are there, perhaps, some lessons from this health crisis that can be usefully transferred to geopolitical crises, such as those of the SCS?

Certainly the pandemic has already had effects far beyond the immediate sphere of health management, the most conspicuous being the concomitant economic crisis. The world is facing the worst economic downturn since the Great Depression, and even the greatest powers have lost significant influence, with the magnitude and speed of this collapse unprecedented in our modern world. Regionally, China and many ASEAN members are experiencing multiple crises: in health, in their finances, and with collapsing supply chains for food and goods. ASEAN policy-makers are struggling to cope with this extraordinary situation, and their efforts are without reference to or support from the great powers. Thus, the Philippines decided to terminate its Visiting Forces Agreement with the United States, and three ASEAN states have recently tried to push back at China’s unilateral claims in the SCS.

With the United States and China playing a blame game about who is responsible for the coronavirus pandemic, the SCS has been drawn into their struggle to find strategic scapegoats. In April 2020, the United States sent naval cruisers and destroyers to the Paracel Islands and Spratly Islands in the SCS for the first time, while two nuclear-powered aircraft carriers were moored at harbors in the region. The Chinese PLA Southern Theater Command accused the U.S. naval vessels of conducting illegal trespass into SCS waters and claimed to have expelled them. It seems probable that the United States and China will continue to exploit the coronavirus pandemic as a tool to influence regional states strategically, which will result in tactical naval operations. With other countries entirely focused on public health, South Korea is well placed to defuse this naval escalation.

The coronavirus is a novel transnational threat that has revealed South Korea, by comparison with almost every other country, as a shining exemplar of competent, transparent, trustworthy governance. Assuming that Chinese statistic is accurate, then China has managed the pandemic with ruthless authoritarian efficiency, but few outside China have felt inspired by this model, and in liberal democracies, people have once again recognized the true character of China’s monolithic system, which tramples even trivial popular dissent, and grabs everything it can get its hands on from its neighbors around the SCS. As for the United States, a health disaster vies for headlines with an economic catastrophe, and Trump is exposed as a breathtakingly incompetent narcissist who has done the exact opposite of “Make America Great Again” by presiding over a historic decline which will surely end with the United States losing its great-power status. One can only hope that the process is as graceful as the decline of British power in the previous century.

Not only the United States, but all major Western countries as well as Japan have also failed miserably to contain the spread of the coronavirus. Yes, there are degrees of failure: Germany is often lauded as a European success story, but as of mid-April they were suffering about as many deaths daily as South Korea had had in total. Moreover, although there is social distancing in South Korea, there is nothing remotely resembling the lockdowns seen elsewhere, and whilst the economy will be impacted, this will likely be within conventional bounds to manage. South Korea is clearly setting a standard that other countries aspire to emulate, and its global stature seems likely to be considerably enhanced in the post-coronavirus era. China and the United States, meanwhile, are engaged in a pathetically unedifying blame game about which is most irresponsible, and, by extension, which system of governance is superior.

Taiwan is another country which has dealt very successfully with the coronavirus. So what do South Korea and Taiwan have in common? Both societies are highly connected with technologically savvy populations, both have competent, transparent, and responsive governments that enjoy the trust of their citizens, especially in times of crisis. Both countries have relied upon effective contact tracing which collects and integrates multiple data sources, and people have calmly accepted this as necessary and appropriate, even in a free and open society, because they trust their governments. By contrast, other countries are still arguing about privacy issues. Australia and New Zealand are two other regional middle powers that have dealt well with the coronavirus, and again, the governments of these countries have retained the trust of their populations.

The United States and China have both treated the coronavirus pandemic as another opportunity to play power politics in the SCS. China’s stance offers little benefit to its neighbors in the near future and the U.S. “America First” policy progressively erodes its world leadership. Rather than working together against a global health threat, the great powers are engaged in a coronavirus Cold War. By contrast, the South Korean coronavirus success story provides significant international leverage to raise South Korea’s profile, both during and after the pandemic. Let us hope that this will afford South Korea greater strategic and diplomatic influence, allowing it to function as an essential stabilizing factor in the SCS.

The world is changing, and the coronavirus will surely accelerate change. Once upon a time, there were high-class fashion-leaders and major-label musicians, now there are “influencers” that drive global trends from their teenage bedrooms, and some are hugely commercially successful. Perhaps there is a parallel evolution of governance, in which ordinary people will choose what they like, escaping from autocracy, and ignoring corporate interests who try to buy their compliance. Before the crisis there was growing disillusionment with liberal democracies as currently established, and some were looking to the Chinese system, but this has now become less appealing. And it beggars belief that during the worst pandemic for a century the United States has decided to withhold its World Health Organization funding. Both types of governance are now being challenged by the middle powers, by competent trustworthy governments, of which there are several in the region, including South Korea. The coronavirus crisis has exposed the flaws of both great powers for everyone to see, and there is now an unprecedented opportunity for the middle powers to increase their influence over geopolitical developments, including the sorry situation of the SCS.