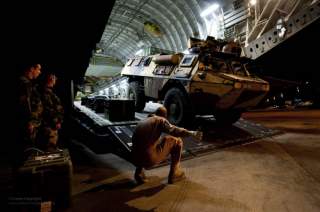 The French are back in Africa, and apparently ready to stay. During a presidential speech at the military base of Niamey, Niger on July 19, 2014, François Hollande announced a new phase in the fight against radical Islamic terrorism in Africa: Operation Barkhane. Coincidentally, the launch of Operation Barkhane took place three days before the U.S.-Africa Leaders Summit began in Washington D.C. on August 4, 2014.

Africa is very much in the minds of the members of the Euro-Atlantic community and is now perceived as an important security dilemma for the West. France has implemented a development-security nexus approach to addressing Africa’s challenges, which is closely connected to the European Union’s strategy. However, Operation Barkhane is a direct illustration of the use of “hard” power in Africa in order to solve a security crisis caused by a regional power vacuum.

Operation Barkhane began on August 1, 2014 and took over the precedent French mission in Mali, Operation Serval. Operation Barkhane, “named after a crescent-shaped dune in the Sahara desert,” is to become the French pillar of counterterrorism in the Sahel region. The French will use and deploy a 3,000-strong counterterrorism force over five countries: Burkina Faso, Chad, Mali, Mauritania and Niger, also known as the ‘G5 Sahel.’ The purpose of Operation Barkhane is to “regionalize” the counterterrorism efforts in the Sahel, as well as bolster “cross-border and region-wide securitization efforts.” According to the Ministry of Defense of France, Barkhane’s objectives are two-fold: first, assist the G5 Sahel armed forces in fighting terrorist networks in the Sahel-Sahara region; second, contribute to the prevention of terrorist safe-havens in the region.

In order to fight jihadists in this vast region, Operation Barkhane shall be seen as a reorganization of the forces already present in the region. It will be composed in terms of military and human capabilities of 3,000 military personnel, six fighter jets (Rafale Mirage 2000), twenty helicopters, 200 armored vehicles, ten transport aircrafts, and three drones (as described by AllAfrica.com, RFI, and African Defense Review). In terms of division of labor between France and the G5 Sahel, four permanent military bases have been established:

- headquarters and air force in the Chadian capital of N'Djamena under the leadership of French Général Palasset;

- a special-forces base in Burkina Faso's capital, Ouagadougou;

- an intelligence base in Niger’s capital, Niamey, with over 300 men; the air base of Niamey, is important as it hosts drones in charge of gathering intelligence across the entire Sahel-Saharan region;

- aside from the four permanent bases, several temporary bases will be created with an average of thirty to fifty men, where and when required.

The Strategic Arc of Instability

Paris attempted to shift its strategy towards Africa under President Nicolas Sarkozy, which has been followed by his predecessor. Historically, France has been a powerful colonial power in Africa. Paris has, since the end of colonization, sought to maintain its influence and deepen its interests in the region. French Africa policy has been known under the term of Françafrique, which embodies neocolonialism and clientelism between Paris and “black” Africa. Once elected, Sarkozy announced he would do away with Francafrique by refusing to do business as usual with Africa. However, as argued by Gordon Cumming in French Politics, Sarkozy’s “Africa policy was marked more by continuity than change.”

With the Arab Spring along with a changing international order, Africa has become a new ground of activity for diverse international criminal and terrorist networks. For instance, countries in West Africa are utilized by Latin American drug cartels in order to sell cocaine onto the European markets. Aside from criminal networks, radical Islamic networks, like Al Qaeda in Islamic Maghreb (AQIM), Boko Haram and Al Qaeda, among others, have flourished in Northern Africa and throughout the Sahel region. The reasons for their rise are various: socio-politico-economic climates in most African countries, porousness of borders, failed states and ethnoreligious tensions.

The 2011 Libyan intervention changed everything and marked the renouveau of French military involvement in Africa. With the collapse of the Qaddafi regime, the Libyan borders became so porous that a large number of criminal and terrorist networks were able to spread across the region. The French intervened in Mali in 2012—Operation Serval—in order to stop the jihadist incursion from Northern Mali into the Malian capital. The early involvements of the French in Africa with Libya, Mali and the Central African Republic demonstrate the renouveau of French interests in such a strategically significant region for France. President Hollande promised the French quick Malian and Central Republic African adventures and now France is looking at a long-term fight against terrorism in the Sahel region.

The reason is that “there still is a major risk” announced French defense minister, Jean-Yves le Drian, “that jihadists develop in the area that runs from the Horn of Africa to Guinea-Bissau.” He added that the “aim [of the Operation] is to prevent what [he] call[s] the highway of all forms of traffics to become a place of permanent passage, where jihadist groups between Libya and the Atlantic Ocean can rebuild themselves, which would lead to serious consequences for our security.” Operation Barkhane is taking over Operation Serval, which previously fought jihadists in Mali. President Hollande has argued that Operation Barkhane seeks to assist and help Africans to enforce their own security. In other words, French defense minister underscored that France is actually assuring its own security, Europe's security and ultimately, that France is becoming the leader in fighting radical Islamic terrorism.

Several points should be underlined concerning the success rate of such a wide counterterrorist mission. First, as demonstrated in Afghanistan, Iraq, Libya and Mali, without a solid state, composed of a territorial-polity-society package (to retake the terms of Barry Buzan), the long-term success of any counterterrorist operation will be difficult. The fighting aspect of this mission could go on endlessly without the inclusion and implementation of a state-building dimension in each country of the Sahel region. Who will undertake the lengthy, costly and complex task of state-building? The EU? The UN? The French? Enforcing security in the region with boots on the ground in order to assure the protection of the European homeland may only be a one-dimensional strategy. Afghanistan is the prime example.

Second, in term of costs, how much is France willing to invest in this wide counterterrorist operation? The domestic economic situation of France is worrisome considering its slow economic and industrial engine. France has been considered the sick man of Europe for quite some time and is unable to address its economic challenges and budget-deficit levels. The French defense minister confirmed that France has the required economic resources to lead this counterterrorist endeavor. It appears that the French president is giving the economic resources to the military in order to lead the mission to its end. Nevertheless, with a continuously inward-looking public opinion and a middle class hurt by the Eurozone crisis, it looks like a real political gamble for President Hollande. How will the French respond to such an operation? The answer to such a question may not be necessary. Considering the extremely low media coverage on the implementation of Operation Barkhane, the French government is doing it quietly during a period when most of the country is on holiday.

Third, aside from African cooperation, will the United States and the EU contribute to the military efforts? After the wars in Iraq and Afghanistan, the American public has grown war-weary. A large majority of Americans are opposed to the idea that the United States should play the role of global policeman. Thus, President Obama has been in the business of bringing back troops, and “pivoting” to Asia. The United States may remain on the sideline, eventually providing some intelligence to the French as provided in Mali. In any case, the United States sees Africa as an important region in term of security. For instance, the U.S. Department of Defense created the United States Africa Command (AFRICOM), one of the six strategic geographical command centers, which launched its first operation in 2007.

When it comes to the EU, the Union has been concerned about the situation in the Sahel for quite some time. For instance, the EU launched the 2011 Strategy for Security and Development in Sahel, a comprehensive and holistic strategy for the strategic region. This document clearly demonstrates the connection between security and development, and is centered on four dimensions: development, good governance and internal conflict resolution; political & diplomatic dialogue; security and rule of law; and countering violent extremism. Additionally, the EU has deployed several Common Security and Defense Policy missions (CSDP) on the ground through one military CSDP mission in Mali (EUTM Mali) and three civilian CSDP missions (EUCAP Sahel Mali, EUBAM Libya and EUCAP Sahel Niger). These CSDP missions may provide some assistance in training armed forces—police and army—of these countries in addressing counterterrorism tactics and strategies.