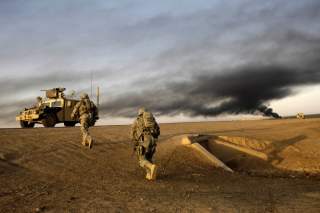 SINCE WORLD WAR II—the largest military effort ever by the United States, and one ending with clear victory—the use of U.S. military force overseas has exhibited two patterns. One is the increasing frequency and duration of the application of force. This trend has become especially noticeable since the turn of the twenty-first century, with the United States fighting its two longest major military campaigns, in Afghanistan and Iraq. Simultaneously, Washington has conducted combat operations in Libya, Syria and elsewhere, all under the indeterminate rubric of “war on terror.” An entire generation of Americans has come of age with its country perpetually at war.

This state of permanent warfare is hard to explain in terms of national self-image. Americans have traditionally seen themselves as peace-loving folks who strike back only when someone else picks a fight. In the words of John Quincy Adams, they tend not to seek out “monsters to destroy.” The United States has not been a latter-day Sparta, defining its virtue in terms of martial spirit.

The second pattern makes the first even more difficult to comprehend: the overall results of all this fighting overseas have been poor. Uncle Sam has regularly cried “uncle.” The Korean War ended in a draw. The only major U.S. war since then to register a win was Operation Desert Storm, the expulsion of Iraqi forces from Kuwait in 1991. The other large U.S. military campaigns of the last sixty years fall on the opposite side of the ledger. They include the Vietnam and Iraq fiascos, as well as a war in Afghanistan that has gone on for fourteen years and shows no sign of ending. More modestly sized uses of air power have brought only mixed results: some success in the Balkans in the 1990s, but extremist-infested chaos in Libya after the intervention in 2011. Smaller U.S. operations on the ground also have had mixed outcomes, ranging from achievement of some modest objectives in the Caribbean to significant U.S. casualties in, and an embarrassing withdrawal from, Lebanon in the early 1980s.

The United States has been employing military force overseas more than what prudent pursuit of its interests would call for. Yet it keeps coming back for more. An impulse for more foreign military expeditions, despite its poor record, is reflected not only in the two-decade trend toward permanent warfare but also in current pressure in American public debate to do still more militarily in the Middle East. This impulse is not just a matter of policymakers misunderstanding foreign conflicts. More fundamental elements of American thinking are at work and are affecting today’s debates about military force in Syria, Iraq and Afghanistan.

ONE POSSIBLE way to explain the trend toward permanent U.S. engagement in warfare concerns long-term changes in the international system and the position of the United States in it. There is some validity to this approach. The United States evolved into a superpower with the increased opportunities and responsibilities that come with it. But the ability to project military power across the globe does not imply that it is prudent to do so, particularly given the United States’ string of poor results. Political scientist Barry Posen explains that although the unmatched ability to project military power gives the United States command of the global commons (e.g., sea lanes and international air space), it does not give Washington the ability to control events wherever it wants. The expansion of U.S. military capabilities has prompted excessive applications of force, much as a person who owns a nifty hammer tends to perceive nails everywhere.

Theories elevating terrorism to a new and systemic threat wield little explanatory power. Granted, the September 11, 2001 terrorist attacks did trigger an abrupt change in the American public mood. But international terrorism has been around for centuries and has been shaping U.S. interests for many decades. America’s recent military misadventures cannot be sufficiently explained by the rise of terrorism. The costly expedition into Iraq had nothing to do with terrorism, notwithstanding contorted efforts by the promoters of that war to capitalize on the martial post-9/11 public mood.

A traditional explanation for resorting to arms focuses on the vested interests of particular stakeholders. In the United States, this thesis has been most popular on the left, but has had a wider cachet ever since Dwight Eisenhower spoke about a military-industrial complex. Of course institutional biases exist, but the attitudes expressed by the U.S. institution most involved in the use of force—the military—do not support the thesis. The military tends to favor full application of resources to assigned missions, not the undertaking of new missions. It was a civilian policymaker, Madeleine Albright, who asked the nation’s top military officer, Colin Powell,“What’s the point of having this superb military that you’re always talking about if we can’t use it?” Today’s senior military officers are exhibiting some of the same caution that Powell did. In a recent hearing of the Senate Armed Services Committee that addressed the possibility of establishing a no-fly zone in Syria, the vice chairman of the Joint Chiefs of Staff, Gen. Paul Selva, remarked that “we have the military capacity to impose a no-fly zone,” but “the potential for miscalculation and loss of American life in the air” render the idea unwise. The hawkish and disappointed committee chairman, John McCain, referred to this testimony as “one of the more embarrassing statements I have ever heard from a uniformed military officer.”

THE INFREQUENT use of military force in America’s earlier history informs today’s frequent use. Blessed with physical separation from foreign threats, Americans adopted the non-Clausewitzian habit of thinking about military means and political ends as two separate realms. They thought about war as the last resort, sallying forth abroad to eliminate whatever threat was sufficiently serious to justify such an expedition. Unlike the Europeans living with continuous threats at close quarters, Americans did not have to develop ways of thinking about security and military force that were more balanced and sustainable over the long term even with more permanent and intense engagement with the outside world.

But after World War II, the American superpower did become permanently and intensely engaged with the rest of the world. It was the sort of engagement that Americans were used to associating solely with wars, some “colder” than others. Thus an irony of American history is that the infrequency of wars in the nineteenth century helped to shape a national outlook that, combined with requirements of America’s global involvement in the twenty-first century, has brought Americans close to believing themselves to be in perpetual war. The belief has helped foster the reality.

The optimism that post–World War II Americans have exhibited as to what can be accomplished through force is rooted in the remarkable success that the United States enjoyed while rising to a position of unparalleled power. After all, military force produced an impressive winning streak through World War II. Even the one earlier war that should be scored as a draw—the War of 1812—was perceived by many Americans at the time as a win because combat ended with a smashing American victory at New Orleans. Even the Civil War that tore the nation apart later in the nineteenth century was ultimately a successful application of arms: a rebellion was quelled, the union was preserved and the country emerged freer than before.

America’s military successes have been so obvious, so long-standing and so deeply embedded in American culture and lore that they still shape current discourse on the use of force. That history, ingrained in American habits of thought, impedes the learning of lessons from more recent and less successful uses of force. The history is part of what lies behind McCain’s belief that it should not be too hard for “the most powerful nation on Earth” to set up a no-fly zone or to “take out” the so-called Islamic State.

Most of the wars the United States fought while still on a winning streak did not confront it directly with the nationalism-soaked problems that U.S. military interventions have encountered since the streak ended. The United States got its first real taste of such problems dealing with a stubborn insurgency in the Philippines after taking the islands from Spain following an easy win in the Spanish-American War. The lessons from that experience were not fully applied to a bigger insurgency elsewhere in Southeast Asia half a century later. Robert McNamara, the U.S. secretary of defense during the first half of the Vietnam War, wrote many years afterward with insight and anguish,

“We underestimated the power of nationalism to motivate a people (in this case, the North Vietnamese and Vietcong) to fight and die for their beliefs and values—and we continue to do so today in many parts of the world.”

IN MANY of America’s more recent foreign expeditions, resistance to applications of U.S. military power stems not only from such strong nationalist sentiment but also from widespread perceptions of U.S. power as threatening rather than helpful. The difficulty most Americans have had in recognizing such perceptions and the problems they pose for U.S. military campaigns emanates from the benign American exceptionalist self-image. It also has historical roots in the geographic isolation that gave citizens of a younger and weaker United States the luxury of not having to think much about how someone else’s projected power can feel threatening.