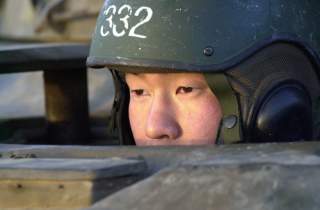 The Democratic People’s Republic of Korea (DPRK) has pursued a nuclear weapons program for decades. In 2006, despite sanctions and economic hardship, North Korea tested its first nuclear weapon. It has since conducted two more successful tests in 2009 and 2013.

That is pretty much the extent of unclassified knowledge about Pyongyang’s nuclear arsenal.

North Korea openly admits it has nuclear weapons. In fact, the hermit kingdom brags about its arsenal and regularly threatens to annihilate its enemies. Other than that, North Korea has been vague about its nukes and declines to discuss details.

It’s no surprise that little is known about North Korea’s nuclear program. Information about a country’s nukes can be hard to come by, even in free societies like Israel’s. But the Stalinist-inspired North Korean dictatorship is one of the most isolated regimes on Earth, and information coming in and out of the country is tightly controlled.

1. Nuclear weapons are meant to guarantee the security of the regime

The 1991 Persian Gulf War was not just a disaster for Saddam Hussein. On the other side of the world, the North Korean regime stood by and helplessly watched as the Iraqi military — outfitted similarly to the Korean People’s Army — was destroyed in a matter of days. A revolution in military affairs, combined with a new generation of weapons and tactics demonstrated the increasing irrelevance of sheer numbers.

The lesson was clear: the days of North Korea’s military might protecting the regime were over. Kim Jong Il, who assumed power in 1994, made the production of nuclear weapons — and the means to deliver them — his number one priority.

Being described as a member of the “Axis of Evil” in 2001 undoubtedly added to his sense of urgency. Nor did Allied military action in 2011 against Muammar Gaddafi’s Libyan regime after it gave up its program to develop weapons of mass destruction reassure Pyongyang.

Kim succeeded in his plan. Thanks to North Korean nuclear weapons and the uncertainty surrounding them, the United States and South Korea seem unlikely to undertake major military action against Pyongyang, lest it trigger a nuclear response from the DPRK. The North Korean regime is now virtually invulnerable to outside threats.

2. The number of North Korean nuclear weapons is unknown

We know the North has had at least three nuclear weapons — the three it tested. We don’t know how many more it has stockpiled. North Korea has not stated how many nuclear weapons it has, and nobody outside of Pyongyang knows for sure. Estimating North Korea’s nuclear arsenal is made even more difficult because its early weapons may have been inefficient designs with a relatively low explosive yield.

In 2008, North Korea declared it had 38.5 kilograms of weapons-grade plutonium. It also has highly enriched uranium (HEU) that it can use to build a nuclear weapon, but the DPRK has not declared how much of the material it has. North Korea also claims it restarted the Yongbyon nuclear plant in 2013, meaning it has been producing fissionable material for the last two years.

In 2012, analyst David Albright estimated North Korea had enough material to build up to eleven nuclear weapons. In 2015, the US-Korea Institute at SAIS estimated it had between ten and sixteen devices, of those between six and eight were made of plutonium and another four to eight made out of HEU. Further, the institute claimed that under the projected worst case scenario, North Korea could have 100 weapons by 2020.

2. Current methods of delivery for the North’s nukes are unknown

There are a limited number of ways to deliver a nuclear weapon to a target. Bombs, artillery shells, and missiles based on aircraft, ships or ground vehicles are all possible delivery systems. Most, but not all, require miniaturization and ruggedization to allow them to survive the journey to the target.

North Korea has worked for decades to improve its missile force, turning intermediate-range ballistic missiles into something that can hit the United States. It has also been working on making a weapon small and durable enough to arm a missile. North Korea claimed that its 2013 nuclear test involved miniaturizing a weapon.

Even if miniaturization has eluded the DPRK, there remain other ways it could deliver a nuclear weapon. It could simply dig a tunnel and set off a weapon somewhere south of the demilitarized zone. Nor is Incheon or Seoul that far away from the border. Another option would be to load it onto a commercial ship and slip it into the port city of Busan.

4. The North’s nuclear doctrine is unknown

Under what circumstances would North Korea use nuclear weapons? Does it have a “no first use” policy? Does it consider nukes offensive or defensive weapons? Maybe both? Are Pyongyang’s nukes strategic or tactical?

Outsiders — which is everyone outside of North Korea — have no firm answers, a disturbing notion since understanding under what circumstances North Korea would use a nuclear weapon is essential to avoiding a nuclear war.

Other countries are more explicit. China and India, for example, have both made a pledge of “no first use” of nuclear weapons. Neither will use nuclear weapons unless they are nuked first. It’s an admirable policy of restraint and pre-tension signaling. North Korea, not surprisingly, has taken a different tack and nuclear ambiguity has become an essential part of the Kim’s nuclear strategy.

Not understanding the terms under which North Korea will use nukes has a chilling effect on any potential military action. Tit-for-tat artillery exchanges in retaliation for bombarding South Korean territory might potentially trigger a nuclear war. Rolling the combined might of the South Korean and U.S. armies up to the entrance of the Ryugyong Hotel might not trigger nuclear war. We really don’t know.

5. Giving away nukes would probably end the Kim regime

Nuclear weapons have become the guarantor of the Kim dynasty. But by pushing so hard for nuclear weapons, the Kims may have fallen into a trap of their own making.

North Korea has long maintained that it preserves the “real” spirit of the Korean people. It safeguards this gem of Koreanness from the imperialist United States and the puppet government in Seoul. That’s the whole point of heavily arming itself and cutting itself off from the outside world.

The Kim dynasty has defined the United States as the antithesis of Koreanness. The Yankee imperialist enemy has helped legitimize multi-generational rule by the Kim family, as well as justify repressive security measures, harsh living conditions, lack of economic progress and the generally low level of prosperity.

If Kim Jong Un were to cut a deal with the United States and other powers to relinquish his nuclear weapons, he would be acknowledging that the existential threat no longer exists. And if there’s no longer a threat to North Korea, why should the people tolerate deprivation, sacrifice and the Kims?

North Korea’s nuclear arsenal is not going away anytime soon. It will likely continue to grow. Getting to the bottom about the many uncertainties about Pyongyang’s nuclear program will help the rest of the world deal with as ever more dangerous and complex situation. Ambiguity may conceal weakness. It may also conceal strength.