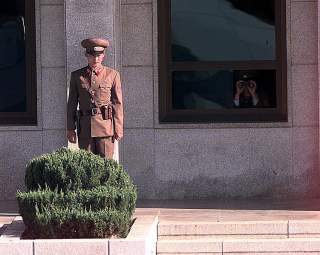 The Kim regime in North Korea, as with any hereditary dynasty, must base its claims to legitimacy to a large extent on sacred mythology. Being an atheistic regime, however, eliminates the most common rationale for transmission of rule from one generation to another—the divine right of kings. The juche philosophy of “self-reliance”—that the North Korean people are the masters of their country’s fate—was long promulgated by North Korea’s founding Great Leader Kim Il Sung as the primary justification for regime legitimacy. This, however, has slowly given way to an increased emphasis on the “Baekdu bloodline”—blood descendants of this same Kim Il Sung. (Despite his death in 1994, Kim Il Sung remains as “Eternal President” of North Korea.)

The “Baekdu bloodline” has, in fact, adopted some of the same mythological symbolism used in the past to surround other great leaders with a special aura. Mount Baekdu, an extinct volcano on the Korean-Chinese border with a pristine crater lake, is considered the ancestral home of the Korean people. Linking Great Leader Kim Il Sung’s anti-Japanese guerrilla activities and the birth of his son, Kim Jong Il, to this sacred mountain is the equivalent of the linkage of Moses, the Burning Bush and the Ten Commandments to Mount Sinai. Additional symbols used to depict the birth of Dear Leader Kim Jong Il on the sacred Mount Baekdu have included a star in the heavens—as with the Star of Bethlehem—and a simple log-cabin-like structure—as with depictions of the birthplace of the Great Emancipator, Abraham Lincoln. Further, North Korea’s official Korean Central News Agency (KCNA) reported on the occasion of Kim Jong Il’s death in 2011 “peculiar natural wonders” on Mount Baekdu including: the cracking of ice, despite freezing temperatures, on the lake atop the mountain “shaking the lake with a big noise” and the casting of a red glow at dawn on Kim Jong Il’s calligraphic writing on the mountainside: “Mount Baekdu, Holy Mountain of Revolution.”

Soviet archives, however, indicate that Kim Jong Il was born as Yuri Irsenovich Kim in the village of Vyatskoye near Khabarovsk in 1941. His father, Kim Il Sung, was then commanding the 1st Battalion of the Soviet 88th Brigade, made up of Korean and Chinese exiles, having withdrawn from Manchuria due to Imperial Japanese military pressure. These Soviet archival records are not, however, conducive to the official North Korean narrative.

The centrality of the Baekdu bloodline to Kim family legitimacy was further demonstrated in August 2013 by a report in South Korea’s Chosun Ilbo newspaper. North Korea had reportedly revised the ten fundamental principles of the Korean Workers’ Party for the first time in thirty-nine years to include the statement that the “party and revolution must be carried ‘eternally’ by the ‘Baekdu bloodline.’” B.R. Meyers, in his work The Cleanest Race, presents a comprehensive explanation of the North Korean obsession with bloodlines and racial purity.

Given this “Baekdu bloodline” connection to regime legitimacy, any challenge to this concept would be considered treasonous. However, even though the guerrilla camp in the area of Mount Baekdu in opposition to Japanese colonial rule is a key component of this legitimacy, there are indications that the wrong person may be occupying the throne in Pyongyang. In this familial Game of Thrones, another family may have a greater claim to legitimacy.

Choe Ryong Hae, considered by many as Kim Jong Un’s right-hand man following the execution late last year of Kim’s uncle Jang Song Thaek, has his own blood-line connections to North Korea’s revolutionary past. Choe, according to North Korea expert Aidan Foster-Carter, helped smooth the way for Kim Jong Il’s succession back in the 1980s and nineteen 1990s through his position as head of the Kim Il Sung Socialist Youth League. In 2010 Choe was appointed to the Central Military Commission (CMC) and as an alternate member of the Politburo. He was then made a Vice Marshall in April 2012, despite having no military career. But such honors in North Korea are often derived from one’s family background and Choe has sterling revolutionary credentials.

He took over as Vice Chairman of the powerful Central Military Commission (CMC) around the same time (2012) when leading General Ri Yong Ho was purged. Choe’s reported mandate from Kim Jong Un was to restore party control over the military, which had eroded during the era of Kim Jong Il’s “songun” (military first) policy.

His central role in the regime was further demonstrated when he was sent to Beijing in May 2013 as Kim Jong Un’s personal envoy to meet the Chinese leadership, including the new President Xi Jinping. Choe was on a fence-mending mission to patch up Sino-North Korean relations after Kim Jong Un had irked the Chinese by carrying out another nuclear test in February of last year, resulting in further UN Security Council sanctions. Choe’s Beijing visit was given wide coverage in the Chinese press with his photo appearing on the front page of China Daily on May 24. It should be noted that Choe’s boss, Kim Jong Un, has yet to be invited for a similar visit by Beijing. Outshining the boss is not usually a good idea in North Korea—Kim Jong Un’s now executed uncle Jang Song Thaek also made a similar highly publicized trip to Beijing before his own fall.

Choe, however, has something Jang lacked—a highly respected family revolutionary background. Choe’s father, Choe Hyon, a former North Korean Defense Minister, was a fellow partisan with Kim Il Sung during the Mount Baekdu guerrilla era. Choe Hyon was actually older in years than Kim Il Sung and had an unblemished revolutionary background. His father (Choe Ryong Hae’s grandfather) Choe Hwa-Shim, served in the Hong Beomdo Unit of the Korean Independence Army founded in 1907 just as Imperial Japan was moving to formally annex the Korean peninsula. Choe’s mother reportedly died in 1920 when Japanese forces moved against Korean supporters in Manchuria of the March 1 1919 Korean Independence Movement. Choe Hyon himself was apprehended by Japanese colonial authorities in 1925 and imprisoned in Yanji, China for seven years. He then joined the guerrilla movement resisting Japan in 1932. Being an elder to Kim Il Sung, Choe did not use honorific language when addressing him.

Kim Il Sung, who was installed in Pyongyang in December 1945 at the age of 33 as the Chairman of the North Korean branch of the Korean Communist Party by occupying Soviet forces, based his legitimacy to rule on his guerrilla background. He claimed that he led guerrilla forces on a raid against the Imperial Japanese military occupying Korea in the June 4, 1937 Battle of Pochonbo. However, an April 2 report in the British newspaper the Daily Mail quoted from a June 7, 1937 article in Japan’s Asahi Shimbun that “A little more than 100 men led by Communist bandit Choe Hyon attacked Pochonbo. One group attacked the local police station, while another group set fire to the whole village and plundered at will.” The Daily Mail claimed that this new evidence suggesting that the leader of this crucial 1937 battle was in fact Choe Hyon and NOT Kim Il Sung has shaken the hierarchy in Pyongyang and has led to plans by Kim Jong Un to purge Choe’s son, Choe Ryong Hae.

Choe Hyon’s revolutionary career also reportedly included directing the Battles of Musan and Gansanbong against the Imperial Japanese Army. Thus it appears that the Baekdu bloodline of the Kim family may be based partially on fabrication. Choe Hyon may well have been the key leader in the anti-Japanese colonial struggle in Manchuria and along the Korean border. This would make his son and heir, Choe Ryong Hae, the legitimate claimant to the Juche throne in Pyongyang.

So what would that mean in Pyongyang’s bloody Game of Thrones where previous leading figures Jang Song Thaek and Ri Yong Ho were suddenly purged and executed? North Korea watchers were intrigued earlier in the year with rumors that Choe Ryong Hae had been purged as well when he failed to appear in public for a number of weeks—never a good sign in Orwellian North Korea. Reuters, however, dispelled that rumor in a March 7 report noting that, “A senior North Korean official, believed to be the No. 2 in the country after leader Kim Jong Un, has reappeared in official television footage, belying reports he had fallen victim to a fresh purge in the isolated nation.”

Choe Ryong Hae was not only back but the rubber-stamp Supreme People’s Assembly, which convened on April 9, promoted him as first-ranking vice chairman of the National Defence Commission, “the highest guiding organ of the military and the managing organ of military matters.” So he definitely appears to be back in Kim Jong Un’s good graces.

But then former number two Uncle Jang followed directly behind his young nephew Kim Jong Un in the funeral procession for Dear Leader Kim Jong Il in December 2011 and was repeatedly at his side for most of the next two years—before being unceremoniously dragged away in public and immediately shot by a firing squad. In the “here today, gone tomorrow” atmosphere at the court of Kim Jong Un no one, including the number two, can feel entirely secure. With new speculation surfacing that his own father may have outshone “the Eternal Sun of Mankind” Kim Il Sung during the guerrilla days on Mount Baekdu, Choe Ryong Hae could feel a bit uncomfortable. He could still decide that at some point it might be necessary to call upon his extensive military contacts for assistance before he, too, hears that dreaded midnight knock at the door.