Welcome to the Third Nuclear Age 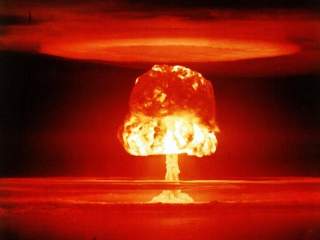 Dividing historical periods into eras is often a difficult endeavor, if only because contemporaries rarely recognize the age they live in as new or special.

Few would have anticipated in 1945 that the bombings of Hiroshima and Nagasaki would herald the beginning of the ascent of nuclear weapons as a central currency of power in the East-West conflict. Instead, U.S. military leaders tended to consider nuclear weapons as a sort of heavily reinforced artillery that helped them "get more bang for their buck." It was only during the Cuban Missile Crisis in 1962 that officials in Washington and Moscow realized that nuclear weapons could well bring about the end of the world. The logic of nuclear deterrence began to take shape: there was no gain—however large—an aggressor could hope for that would compensate the immeasurable damage he would suffer from his enemy's nuclear retaliation. In a nuclear war, there could be no winners, only losers.

The arsenals of nuclear weapons on both sides thus gained the power to exert, through mutual deterrence, a moderating influence on political decisions in the East and in the West. They altered the cost-benefit calculation of a potential aggressor by drastically demonstrating to him the dangers of his actions. Avoiding the use of nuclear weapons therefore became the stated aim of the two superpowers. At the same time, the use of nuclear weapons—and this is one of the fundamental dilemmas—had to be a very real possibility in order to achieve a credible political deterrent. This means that it must be possible to use nuclear weapons in order to prevent them from being used. This inherent contradiction in the concept of nuclear deterrence has always been difficult to explain to the public.

Mutually assured destruction did not only prevent a nuclear conflict, but also prevented a conventional war between the two blocs. Since any military confrontation would have carried the risk of escalating into an atomic exchange, there was an apparent reason to exercise restraint—whoever shoots first dies second. Instead, the adversaries fought proxy wars and attempted to win the arms race between their opposing systems. Whenever a crisis threatened to escalate into a nuclear conflict, caution was the order of the day. The absence of a Western response to the building of the Berlin Wall or to the Soviet invasion of Czechoslovakia are cases in point.

Some observers even believed that a "nuclear taboo" would increasingly establish itself in East-West relations. The longer nuclear weapons were not used, the greater the aversion on both sides would be to ever cross the nuclear threshold and to open the nuclear Pandora’s box at all. It would therefore eventually become virtually impossible to use nuclear weapons. However, others dismissed such considerations as being excessively academic. They believed that in extreme crises, instead of continuing with long-standing patterns of behavior, decisionmakers were more likely to make decisions based on their own perceptions and immediate constraints.

The fall of the Berlin Wall thus ended the First Nuclear Age, without a nuclear holocaust as was so often predicted. That the end of the Cold War would mark the immediate beginning of a new atomic era was not initially obvious. While nuclear weapons arsenals were significantly reduced, especially by the Western powers, traditional ways of thinking prevailed when it came to the function of the remaining arsenals. Nuclear weapons were considered to be insurance against a possible restoration of Soviet/Russian power. Very few experts thought about what the purpose of nuclear weapons might be in what was supposed to become a partnership with Russia.

The nuclear tests performed by India and Pakistan in 1998 provided a taste of what were to be the new challenges of the Second Nuclear Age. Two states had joined the nuclear club and posed no immediate threat to the United States or Russia, but targeted their nuclear weapons against each other. What is more, India saw its nuclear potential as a deterrent against China, while Beijing's concerns were directed at Moscow. Suddenly, deterrence had become multilateral instead of bilateral. How was a logic of deterrence to be formulated that would force India and Pakistan to exercise nuclear restraint in the event of a conflict? Would Moscow or Washington really be able to threaten Islamabad or New Delhi with nuclear annihilation should any of the two cross the nuclear threshold and use nuclear weapons against their neighbor?

The transition to a new age became even more apparent when, three years later, the September 11 attacks happened. Instead of hostile governments, suddenly violent Islamists were capable of committing mass murder and humiliating large military powers. Against such threats, nuclear weapons turned out to be virtually useless. Nonstate actors have no address to which one's nuclear deterrence threat may be directed. What is more, if the attackers are fanatics willing to sacrifice themselves, the traditional logic of nuclear deterrence will fail, since it is based on a mutual interest in survival.

Instead, another nuclear disaster was looming. Nuclear material in the hands of terrorists—whether in the form of nuclear weapons or as easy-to-build "dirty bombs" (mixing conventional explosives with radioactive substances)—seemed an ideal means of conducting high-profile attacks. If the idea of a "nuclear taboo" ever had a binding effect in the East-West context, it came crashing down with the twin towers in New York. In order to achieve their objective of spreading terror and fear, terrorists would be particularly keen to break this taboo, provided that they managed to obtain a nuclear explosive device.

The Second Nuclear Age was thus no longer only about deterrence between nuclear powers. It was also about recognizing and preventing possible terrorist attacks—whether nuclear or conventional. For this reason, intelligence agents became more important than the nuclear strategists of the Cold War. Strategies, called nuclear forensics, were developed that made it possible to determine the origin of fissile material used even if an explosion was induced by terrorists. Based on the radiation released, experts can read “nuclear DNA" like a fingerprint and match it to the country that produced the material. If it could then also be proven that the country of origin passed on the nuclear weapons material intentionally, for instance to provide targeted support for terrorist objectives or groups, the persons pulling the strings could be held accountable.

Given this complicated nuclear challenges, some people thought it was almost logical to completely abolish nuclear weapons in the future in order to eliminate the nuclear element from international politics once and for all. President Obama's dream of a world free of nuclear weapons, which he announced as a political objective in his speech in Prague in 2009, also reflected this stance. Obama's concept of "global zero" was met with a very positive response—at least in the Western world—and rewarded with the Nobel Peace Prize.

Future historians will mark 2014 as the beginning of the Third Nuclear Age, linking this turning point to the illegal Russian annexation of Crimea. With this act, Russia finally left the pan-European security order, terminated its partnership with NATO and has (again) been using its enormous nuclear potential to threaten its neighbors ever since. By conducting flyovers with nuclear bomber aircraft and simulating nuclear strikes against Sweden and Poland, it is marking its supposed sphere of influence and unambiguously threatening NATO. All this was not a response to a supposed transgression by NATO and the European Union, but a conscious decision by the political leadership in Moscow to re-establish Russia as an influential world power.

In trying to answer the question of what a sustainable strategy of deterrence for this Third Nuclear Age should look like, one might be tempted to simply combine the lessons of the two previous ages—nuclear deterrence of a nuclear power in the Cold War connected with concepts for the deterrence of nonstate or irrational actors. This solution falls short. There are fundamental differences with the situation in the former East-West conflict. While the Warsaw Pact at the time, to some extent, outmatched NATO in terms of conventional power, Moscow's conventional capabilities today are clearly inferior to those of the United States and its allies, a fact that Russia is well aware of. Russian military planning for a potential conflict in Europe is thus focused on preventing U.S. support of its NATO allies and blocking the deployment of U.S. armed forces across the Atlantic. In military jargon, this is referred to as "A2/AD" (Anti Access / Area Denial). Russia also considers its nuclear arsenal as a useful military substitute for its lack of conventional weapons capability.

Moreover, North Korea has developed into an additional factor of instability and irrationality. While Pyongyang's first nuclear test was conducted as early as 2006, it remained unclear for a long time whether the regime would actually be capable of producing functioning nuclear weapons. After three more nuclear tests in 2009, 2013 and 2016, there is hardly any doubt. Although knowledge about the status of North Korea's nuclear weapons program is still fragmented, Pyongyang could in a few years possess more nuclear warheads than France or the United Kingdom. A largely erratic actor consumed by the paranoid fear of losing power has joined the nuclear club.