Welcome to the World Without the West 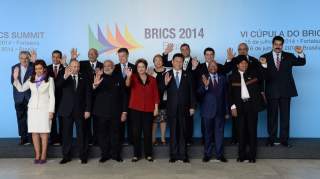 It’s become standard practice for U.S. officials to describe the future of Sino-American ties as the central drama of international politics. In early November, just ahead of President Obama’s summit with his Chinese counterpart Xi Jinping, Secretary of State John Kerry told an audience in Washington that, “The U.S.-China relationship is the most consequential in the world today, period, and it will do much to determine the shape of the 21st century.” National Security Adviser Susan Rice took to the Twittersphere shortly after touching down in Beijing in September to reiterate the oft-repeated phrase that, “Most major global challenges of 21st century cannot be addressed effectively without U.S. and China working together.”

This isn’t just diplomatic courtesy; it’s a core signal of how American foreign-policy makers see the world. The dominant framing in Washington is that the United States and China will in the final analysis sink or swim together, and carry most of the rest of the world with them. If the two powers manage to get their relationship right and cooperate effectively, things go well; if they don’t, then the coming decades will be difficult to navigate for just about everyone.

There’s an academic foundation to this worldview. It assumes that rising powers, now as in the past, face a clear choice when they confront a prevailing international order that was established by a previous generation of great powers. They can either assimilate into the international order or challenge it. As a result, Washington’s China policy has aimed to encourage the former as much as possible, while preparing to limit damage in case China chooses the latter. This logic has formed the basis of America’s hedging strategy toward China for more than two decades.

In an essay in the National Interest magazine in the summer of 2007 (“A World Without the West,” July/August 2007), we argued that these academic theories were dangerously inadequate and that the consequent mental map was wrong. We reasoned that emerging powers, and China in particular, would most likely neither challenge, nor assimilate to the U.S.-led order, because neither of these options is remotely attractive. Why would the Chinese government embrace a liberal system that largely runs counter to its domestic and international interests? And why pick a fight with the wealthiest and most powerful country in the world and its many wealthy and powerful friends? To see China as boxed-in to choosing between two unattractive options was to take imperfect academic theory too seriously, and, even worse, to misinterpret the behavior of rising powers.

Looking beyond this false choice, we noted that rising powers were instead beginning to build a “World Without the West” that “routed around” the existing international order. Upon closer empirical inspection, it was increasingly clear that the emerging powers were preferentially deepening ties among themselves in economic, political, and even security domains. In so doing, they were loosening in relative terms the ties that bind them to the liberal international system centered in the West.

This argument made a lot of people uncomfortable, mostly because of an endemic and gross overestimation of the reach, depth and attractiveness of the existing liberal order.

Now, seven years later, the World Without the West has come into full view. The biggest story in international politics today is not whether Beijing will be seduced, incentivized, or even compelled to sign onto or buy into the existing international system. Nor is it about how the United States and China are headed into a downward spiral toward World War III—although, as areas of competition intensify, the traditional (assimilate vs. challenge) mindset forces analysts, wrongly, to see conflict as the only and likely alternative. What is happening instead is a concerted effort by the emerging powers to construct parallel multilateral architectures that route around the liberal order and will likely reshape international politics and economics in fundamental ways.

The latest and most vivid example of this dynamic is the new Asian Infrastructure Investment Bank (AIIB), which aims to provide an alternative to the iconic Bretton Woods institutions, the World Bank and the International Monetary Fund and their regional sibling, the Asian Development Bank. The AIIB is Beijing’s brainchild and will likely remain firmly in China’s control. India and twenty other developing countries have already signed up as founding members.

But the AIIB is only one of many emerging international institutions that are routing around the Western-led order and, according to a recent comprehensive study of these trends, are “complementary or parallel to existing ones, rarely challenging them head-on.” Other examples include political organizations such as the Shanghai Cooperation (SCO), the BRICS mechanism, development initiatives such as China’s New Silk Road and economic groupings such as the Regional Comprehensive Economic Partnership. The list goes on.

Are these institutions perfect substitutes for the Western-led multilateral institutions of the liberal world order? No, they are not, but why should we expect them to be? Are they yet as big and influential as Western-led institutions that have been in place, in some cases, for more than half a century? Of course not, but in most cases, that has not undermined their ability to attract a critical mass of members.

The question is not whether these new institutions can “replace” elements of the tenuous global order, but rather whether they are developing at a rate, in a direction and with a purpose that will offer meaningful alternatives over the course of the next decade or so. We think the answer to that question is now a decisive, demonstrable yes. This World Without the West future has arrived much more rapidly than most expected, accelerated by a heady mix of reality and perception that the global financial crisis hastened a “rise of the rest” that was already in motion.

The United States has lost precious time and will have to shift intellectual gears fast. The most important first step will be to break free from the false dichotomous construct that sees the rise of China as inevitably trending either in the direction of joining the prevailing system and becoming a “responsible stakeholder” or directly challenging global order, possibly even through major-power war. It is unlikely that either will manifest in the coming decade and perceiving these outcomes as two ends of a continuum has obscured the emergence of the World Without the West.

U.S. strategists will also have to acknowledge that the liberal international order that Americans commonly talk about “defending” is actually more of an aspiration than a reality. This is not to diminish the importance of building an open, rules-based international system, but rather to observe that such a thing hardly exists outside of the confines of narrow geographic and issue areas. The great American mission for the twenty-first century is not to reinforce or repair a robust existing architecture, but rather to continue along the still nascent path of constructing one in the first place. As the World Without the West starts to play an increasingly prominent role in international politics, Washington can no longer rest on the laurels of post–World War II institutions now more than half a century old. A great deal more initiative is necessary to match the disruptive innovation of the emerging powers.

In the meantime, the United States will have to think hard about how to respond to non-Western institutions. Until now, it has been too easy for Washington and its allies to dismiss organizations like the BRICS and the SCO as incoherent and irrelevant. But this attitude is no longer sufficient now that the emerging powers are amassing serious clout and capability.

Washington should in turn pursue a combination of the following options:

First, take a deep breath and let live non-Western initiatives that complement U.S. interests. Not every Chinese-led organization is an inherent threat to the United States, and it’s not a winning strategy for Washington to be seen as always standing in the way of Beijing-led efforts to provide foreign economic and security assistance.

Second, when the United States does in fact decide to oppose Chinese initiatives, it should do so publicly and be crystal clear why—rumors of U.S. backroom lobbying against the AIIB only obscured the Obama administration’s legitimate concerns and fed a media narrative of intransigent American obstructionism. Next time around it would be better to get U.S. officials on the record explaining and standing behind America’s position, which in this instance was shared by a number of leading regional countries including Australia, Japan and South Korea.

Third, consider seeking to shape these organizations from within. Beijing has made a habit of burrowing into multilateral organizations and finding ways to direct and, if necessary, retard their progress. Washington and its allies should do the same, even with organizations like the SCO that might be normatively noxious.

Finally, Washington must be ready and willing to engage in institutional bargaining and competition. The rise of the World Without the West should put to bed for now the persistent post–Cold War dream of a universally accepted and legitimate liberal order. In its place, the United States should aspire to build and expand networks and pockets of economic and political liberalism where and when the best opportunities present themselves. This will mean working with like-minded states and forgoing the rhetoric that the United States can’t advance its interests and can’t manage big problems without the cooperation of China and the other emerging powers. In some cases (like climate change), this is probably true as a matter of numbers. But in most cases it is not.