The West Can Prevent Putin’s Third Invasion of Ukraine 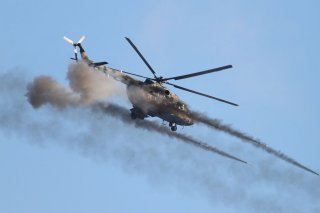 Vladimir Putin’s third invasion of Ukraine will not be “a Crimea” or “a Donbas.” It will be large-scale, brutal, and decisive. It will be horrible and change Europe forever. There will be millions of refugees, disruptions to energy markets, and it will ignite economic crises across Europe and the United States.

The Russian leadership does not fear threatened sanctions; Russia has been hardening its economy since 2014. Last summer, Russia’s gold reserve (the world’s largest) reached $600 billion. Since then, Russia has added another $80 billion of gold to its stockpile. Which other nations went on gold-buying sprees during the pandemic? Additionally, China likely agreed to backstop Russia’s economy. For years, Xi Jinping has been trying to offer alternatives to SWIFT, New York, and London. This is a test for China as well. Besides, even if Russia was cut off from SWIFT, how else could Germany pay for its natural gas from Russia? How would the Netherlands buy much of Europe’s oil?

For Europe and the United States, the consequences of this war will be catastrophic and remain mostly undiscussed. This is how World Wars I and II started. The UN was created to prevent this current type of scenario. But even as Russian forces move into their attack positions, this war remains preventable. In these last moments, it requires bold, focused U.S. leadership to unify the world, stand with Ukraine, and convince Putin that Russia’s security environment after an invasion will be far worse than it is today.

Ukraine did not stoke these tensions and is an undeserving victim. This situation is wholly manufactured by Russia. There are no “Russia-Ukraine tensions,” just Russian. This attempt by a fellow UN member to demolish a nascent democracy sets a horrible precedent. The United States just organized an online summit of democracies. Will we now watch one of its participants be trampled by Russia? Ukraine’s unfortunate situation is only due to its misfortune of bordering Russia. Putin never wants Ukraine to be more than a vassal. Among Russia’s goals will be destroying Ukraine’s ability to defend itself again. This is also personal. Putin wants to firmly establish himself among great Russian leaders. Russia’s efforts will likely be very demonstrative as a warning to Georgia, Moldova, and others, including the United States. But Russians expect Ukrainian passivity and even their acquiescence—they are wrong. This war will be horrible, but not one-sided.

What is at stake for the United States? The last three U.S. administrations demonstrated extreme cautiousness to avoid direct confrontation with Russia. That was prudent, but there was never reciprocity. For years, Russia instigated unsafe actions against U.S. military aircraft and U.S. Navy ships in the Baltic and Black Seas and as far away as the Pacific. In Syria, Russian military units rammed U.S. Army combat vehicles and Russian-sponsored private military formations sought confrontation with U.S. Special Forces. Russia took aggressive actions against U.S. diplomats worldwide including assaults and doping. Russia consistently demonstrates a lack of respect for U.S. forces and its diplomats. We need not even mention Russian cyberattacks against the United States. Russia does not fear escalation. The United States’ credibility is at stake, yet it seems not even willing to defend itself. The U.S. situation will only worsen with a decisive invasion of Ukraine.

The United States tried to evade this issue because Ukraine is not a NATO Ally. Was Kuwait a NATO Ally? Was Bosnia? Kosovo? Instead, the question should be whether a large-scale, decisive invasion of Ukraine will harm U.S. national interests. George H.W. Bush and Bill Clinton’s successes were due to their administrations’ ability to rally allies and partners around shared national interests. U.S. military cemeteries across North Africa and Europe are filled with young Americans killed in world wars that the United States tried to avoid because the eventual consequences were unclear for the United States. Do we really want to find out what the world would be like without U.S. leadership? Whether Ukraine is a NATO ally or not, U.S. credibility is at risk, and it will likely become the starting point of newer challenges to the U.S. security interests in East Asia, the Middle East, and elsewhere.

If Russia takes over Ukraine, its unacceptable, unreasonable demands will not cease. Russia’s pre-Christmas demands had nothing to do with Ukraine. That point is lost on many. There was nothing that Ukraine could have done to satisfy Russia’s demands which were all directed towards U.S. and NATO posture and operations. But Putin does not even want to deal with the European NATO powers. This point was recently proven by European attempts at diplomacy including President Emmanuel Macron’s visit to Moscow. Putin could not have been clearer that he did not want to listen to the French president, a foreboding omen for Europe and the United States. Putin only wants to speak with the United States in order to later refocus blame for Russia’s own actions on Washington.

The world will look very different after a third and decisive Russian invasion of Ukraine. Russia is the primary gas and oil supplier to Europe. That cannot be undone quickly, and gas especially is difficult to reroute without infrastructure from other sources. Recently, the United States has bought more oil from Russia than at any other time in history—so much that the United States became Russia’s fourth-largest trading partner. After this war, there will be a permanent Russian military presence in Belarus on new flanks against Poland and Lithuania. Russia’s focus will swing toward Georgia. A longtime Russian goal to cut east-west trade from the Caspian and Central Asia that detours Russia will be within reach. Make no mistakes: That includes the Baku-Ceyhan pipelines. Russia will further dominate the Black Sea which it wants as another bastion for sea-launched missiles.

The number one policy goal of the United States and its allies should be to prevent this war by any or all instruments of U.S. national power. U.S. senior leaders, especially President Joe Biden, should go to eastern Ukraine, meet with Ukrainian leaders, physically demonstrate U.S. support, and rally U.S. allies and partners at the point of impact. Visit Kharkiv and Mariupol, not Kiev. Russia will not likely invade with world leaders present. Complicate and disrupt their plans. This could become America’s and its allies’ and partners’ finest hour. Simultaneously use every diplomatic, informational, economic, and cyber tool available to disrupt Putin’s timelines and Russian decisionmaking now before it is too late. The Budapest Memorandum is a UN Security Council protocol signed by Russia, the United States, and the United Kingdom. Request formal consultation as stipulated in the agreement. Use Organization for Security and Cooperation in Europe Vienna Document obligations. Buy time. The United States needs to make it to April when the Russian Ground Forces’ conscription cycle will limit the horizon for Russian courses of action.

The consequences need to be made publicly clear to Russia. This invasion will change Europe in some ways unexpected by rallying Europe and increasing Russian security challenges. Finland and Sweden will likely reconsider NATO membership. There will be serious reconsideration of Georgia’s accession. Enhanced forward presence battle groups will likely expand and enlarge. There will finally be pressure to counter Russia’s long-standing land-based short-range ballistic and cruise missile advantage from Kaliningrad. For ten years, Russia kept four NATO allies at risk from Iskander missile units in Kaliningrad. Russia should expect a renewed Pershing-missile-like threat much closer to its homeland. The NATO-Russia Founding Act, a long-outdated protocol, will be thrown away forever. The new containment of Russia will commence. Permanent U.S. force presence in Poland and other points along NATO’s Eastern Flank will become reality. Putin is confident that this third invasion will be his moment of glory. It needs to be made clear to Russians and Putin that the risk for Russia is as grand as their plans.

The United States and Europe need to immediately shake themselves out of their sleepwalking and do more than scream “brace for impact.” We are pretending that this is not a worldwide emergency while Russia has amassed the most powerful invasion force in Europe since World War II. Today’s geopolitical complacency, callousness toward an innocent nation-state, and the loss of allied credibility were exactly how two world wars started. The consequences of this pending invasion for the United States, Europe, and Russia demand every desperate effort to prevent it.

Retired Colonel Jeff Hartman is an Associate Professor of the Russian Way of War at the George C. Marshall Center. He served as U.S. Senior Defense Official / Defense Attaché to Tbilisi and Tashkent, and as the Chief of International Affairs for the U.S. Army.