The West Needs a Strategy to Avoid Exhaustion in Ukraine 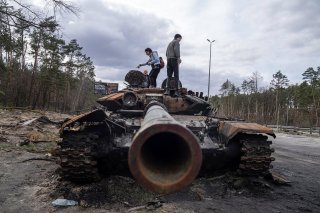 If the current trajectory continues, the billions of dollars in weapons, munitions, and infrastructure provided by the NATO allies to Ukraine and the even greater amount of armor, rockets, missiles, and personnel available to Russia is likely to produce a long, agonizing stalemate, a war of attrition, without Moscow creating a subservient Ukraine or Ukraine “regaining every inch of territory.” But that trajectory is unlikely to continue.

Russia is losing manpower at a rate beyond its replacement capacity. It is losing a surprisingly large number of its officer corps, including very senior officers up to and including generals. It seems to have little coherent strategy and lost its initial first-strike attempt to decapitate Ukraine and take the entire country in one swift advance. It is also losing armament faster than it can weather.

Ukraine had a far smaller force (minuscule in comparison), few tanks, almost no rockets or air assets, and far less equipment in general. In no way was it close to a match for Russia. The NATO allies quickly made up for some of the equipment disparity but none of the manpower. They have now provided tanks, anti-tank and anti-aircraft missiles, armored vehicles, helicopters, anti-artillery rocket systems, drones, ammunition, and recently long-range missiles like the U.S. HIMARS, but Ukraine remains unable to reach much beyond the Russian border, certainly not into Russia’s heartland or its armament factories. The NATO allies now seem about to reverse their previous policy and will provide NATO-conforming jet fighters. Ukraine has relied on the elan of its troops, and, without exaggeration, they have proven to be heroic as has the Ukrainian public. Ukraine has astonished its allies, has shocked Russia, and has surprised maybe even itself.

But neither side can continue at this rate—least of all Ukraine.

Russia is under crippling sanctions which are already cutting its per annum GDP in 2022 down to 2.7 percent. Inflation is rampant, hovering around 15-17 percent. The casualty and fatality rates of its armed forces are substantial and growing. President Vladimir Putin has close to unqualified power, but it is neither absolute nor indefinite. The political gravity of an unpopular war and its military and economic price is likely to afflict him and just possibly loosen his grip on power. Yet Putin also has other cards to play should he be pushed too hard: Georgia with its gnawing division; the continuing hostilities between Armenia and Azerbaijan; Serbia’s destabilizing potential in the Balkans; the conflict in Syria; and others.

However, the Russians will have major problems in Ukraine no matter when they stop their assault. The Russians should not expect that controlling the territories—“governing” is not the right word—will be remotely easy. They will rightly be seen by the large bulk of the remaining population as occupiers, viewed with utter hatred, venom, contempt, and disgust. At best they will be tolerated in silence and out of necessity but sabotage is the usual response of a subjugated population and carefully chosen sabotage is what the Russians should expect. Moreover, it will not be easy for the Kremlin to convince its own soldiers that they are liberating their “little Russian brothers” who are simultaneously trying to kill and maim them. The Russian forces will become demoralized at best, frightened and oppressive at worst. Ukraine’s history with the Nazis will come easily to mind but opposite to the way Putin has invoked it.

President Volodymyr Zelenskyy’s heroism and determination have roused the NATO allies. His defiant stand, his rallying of the Ukrainian people, his molding of a unified nation from a fractured society, have been remarkable. He has all but demanded that the allies produce and deliver much of what his forces needed and they have complied, in part out of self-interest, as he himself has argued, but in part because of his inspiration.

However, that cannot be sustained either. It will fade as the war takes its toll not only on Ukrainians but on the allies. Zelenskyy has been clear that Ukraine will require $5 billion per month from its partners, an initial estimate now doubled for the indefinite future. Their indefinite compliance is unlikely. As the war drags on, more of their citizens and more of their political representatives will begin to question the investment. The allied economies are heading for recession and are already reeling under high rates of inflation. They are being challenged by climate change, by heat and fire, by drought, by the social claims of their own citizens, by crises in other parts of the world (especially Africa), by high rates of both taxation and inflation, and by political breakdowns at home. Already cracks are forming in the previously unified political front in the United States. Some Republicans, still a minority, are now defecting and opposing continued limitless funding and equipment for Ukraine. A Democratic minority is very likely to follow, albeit with a different domestic agenda. The Baltic states will be the last to question the claims of Ukraine but, like the United States, the German public is hearing dissent from the Right and the Left of its political spectrum. French president Emmanuel Macron has long argued against “humiliating” Russia, with which Europe’s geography and history demand some kind of accommodation. Italy’s politics look more and more like the meltdowns it has experienced since the war. Prime Minister Boris Johnson’s successor is less likely than he to be so adamantly supportive of Ukraine. Gas shortages and cold homes this winter will have their political effects.

In that context, Zelenskyy (and Ukraine with him) runs a very substantial risk that his heroic stance will wear thin with the allies over the next months, let alone years. His insistence is likely to look increasingly incessant, self-righteous, berating, demanding, harping, even avaricious and grasping. Ukraine is not their only problem, not even their most important one. Indeed, if Russia can sustain a long, seemingly endless war of attrition (hardly a certainty), Zelenskyy’s deservedly astounding domestic popularity may also fray as cold, privation, tears, destruction, and devastation wear against the current rage, fury, patriotism, and resolve like a relentless sea against hard rock.

The NATO allies in conjunction with Zelenskyy need now to develop a long-term viable strategy, a plan with realistic objectives (stop the Russian advances? Roll back the Russian gains?), consequent and viable financial and military resource guarantees, and an actual blueprint for the strategy’s implementation. Instead of intermittent and impassioned appeals, Zelenskyy would accede to that strategy, in particular its probably limited aims including the possible forfeiture, at least temporarily, of some Ukrainian territory.

Effecting that strategy would almost certainly require possibly protracted mediation rather than some dramatic face-to-face multilateral conference and negotiation. Several possible mediators come immediately to mind. Turkey’s President, Recep Tayyip Erdogan, has already brokered the UN-sponsored grain deal. He retains good relations with Putin while Turkey remains also a member of NATO, if barely so sometimes. He may be the most serious and effective mediator, however much it may rankle NATO capitals. Notwithstanding their February 2024 “no-limits” friendship agreement, even China might find it in its interest to mediate a settlement if only to attenuate the inconsistency of its claim for territorial sovereignty as the cornerstone of international order while its Russian friend has blatantly and forcefully violated the internationally recognized borders and territorial sovereignty of Ukraine. Indeed, various Chinese officials have clarified the limits to the no-limit friendship including compliance with UN accords. And as China has been noticeably reticent to support Russia’s incursion into Ukraine, it has not (yet) supplied weapons or direct financial support to Russia notwithstanding Putin’s general appeals. India, too, might be able to mediate given its own concerns about sovereignty, its continuing trade relationship with Russia—centered on armaments and notwithstanding Western trade sanctions on Russia—and its offsetting membership with the United States, Australia, and New Zealand in the Quad.

The diplomatic challenge is not finding an appropriate intermediary but rather whether the warring parties are open to genuine intermediation and whether the “dispute is ripe,” to use the terminology of mediation. And that is a matter of political will in both Moscow and Kyiv. The NATO allies should begin to actively—although probably not publicly—press for just such a mediated solution, in which Moscow would recognize the sovereignty of Ukraine while Kyiv would recognize that, at least provisionally, it has lost de facto if not de jure control over parts of eastern and southern Ukraine. The geographic and political details of that “deal” are precisely what any mediators would be charged with negotiating. The alternative would be a continued, protracted, exhausting war of attrition with all its attendant human costs: decimation of the troops on both sides, uncertain outcomes, degraded economies, displaced populations, and heart-rending scenes of personal and family devastation in Russia too, not just in Ukraine.

Gerald F. Hyman is a Senior Associate (non-resident) at the Center for Strategic & International Studies. He has published articles on a variety of topics, including Afghanistan, Turkey, Ukraine, and US foreign policy more generally. Between 2002 and 2007, he was Director of USAID’s Office of Democracy & Governance.