Is the West Ready for Russia’s Sarmat Heavy ICBM? 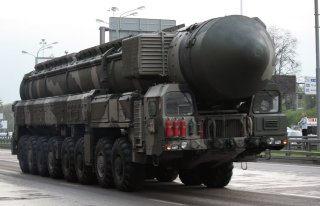 On April 20, Russian president Vladimir Putin announced the first full test launch of the new Sarmat heavy intercontinental ballistic missile (ICBM), which he declared to be a success. Putin turned the announcement into a new type of nuclear threat characterizing the launch as a “…wakeup call for those who are trying to threaten our country in the frenzy of rabid, aggressive rhetoric.” The Sarmat is the most dangerous of Putin’s nuclear superweapons—of which there are eight at last count. (The list of superweapons is a subset of Russia’s announced strategic nuclear and hypersonic missile modernization programs and is expanded every year in Putin’s annual State of the Nation address.) The Sarmat will be Russia’s main nuclear counterforce weapon with the role of attacking the U.S. strategic nuclear deterrent. The very existence of this weapon is a reflection of the systemic failure of the 2010 New START Treaty to constrain nuclear threats. “New types” of heavy ICBMs were prohibited by the 1979 SALT II Treaty and the original (1991) START Treaty. In combination with the complete elimination of all of the qualitative restrictions in the original START Treaty (Article V) and most of the verification regime, the New START Treaty is a cheater’s paradise and sets no real limits on breakout.

In light of this development’s significance, it is rather striking that all President Joe Biden’s Pentagon stated was,

Russia properly notified the United States under its New START treaty obligations that it planned to test this ICBM. Such testing is routine and was not a surprise. We did not deem the test to be a threat to the United States or its allies. The Department remains focused on Russia’s unlawful and unprovoked aggression against Ukraine.

Josh Rogan of the Washington Examiner observed, “If you need a good example of the Biden administration’s penchant for appeasing Russia, look to Pentagon spokesman John Kirby’s almost congratulatory response to Russia’s test of a Sarmat-class intercontinental ballistic missile on Wednesday.” It is even more alarming that such a statement was made just after the completion of the Biden administration’s Nuclear Posture Review, which should have focused precisely on this type of nuclear threat.

In 2018, Putin stated that the “Sarmat will be equipped with a broad range of powerful nuclear warheads, including hypersonic, and the most modern means of evading missile defence.” Russia says the Sarmat can attack the United States over the South Pole, apparently to exploit limitations in U.S. early warning radar coverage. As part of the launch announcement, Colonel General Sergei Karakayev, commander of the Strategic Missile Forces, stated that the Sarmat can carry several of the Avangard hypersonic glide vehicles. Russian state media is saying that the Avangard has a yield of two megatons. According to RT (Russian state media), the Russian Ministry of Defense said the “…Sarmat will be able to carry up to 20 warheads of small, medium and high power classes.” Based on Russian and Western press reporting, these categories apparently equate to 100-150-kt, 350-kt, and 800-kt. TASS, the main state news agency, reported that it will carry “no fewer than 15” warheads.

In December 2019, Putin was told at the Russian Defense Ministry that Russia planned to deploy twenty regiments of the Sarmat by 2027. Prior to this disclosure, the Russian press reported that forty-six missiles were to be deployed. When the first launch was announced, Roscosmos’ (the Russian Space Agency) then-Chief Executive Officer (and former NATO ambassador and deputy prime minister) Dmitry Rogozin said, “We will have 46 Sarmat strategic combat systems” and they were a “gift to NATO.” (Emphasis in the original). The number forty-six equates to the reported number of SS-18 heavy ICBMs operational in Russia before silo conversion to Sarmat began. If the number is twenty regiments (120 to 200 launchers), Russia won’t make this date but this is still alarming because it entails a large expansion of Russian nuclear warfighting ability. It does not suggest intent to comply with the New START Treaty or any subsequent arms limitation agreement. Even forty-six deployed Sarmat do not really fit into a New START Treaty limited force of 1,550 deployed warheads.

Even forty-six Sarmat are enough to target U.S. strategic nuclear forces. Twenty regiments add up to between 2,400 and 4,000 warheads on the Sarmat force alone. It will also carry the Avangard hypersonic glide vehicle but the number is not likely to be very large. The Sarmat ICBM is almost certainly exclusively nuclear-armed. While earlier Russian reports said that the Sarmat can carry ten-fifteen warheads, in light of the Russian claim that the Sarmat has a 10 metric ton throw-weight, twenty warheads is plausible. (For comparison, the throw-weight of the U.S. Minuteman III ICBM is 1.15 metric tons. It was designed to carry three warheads but now carries only a single warhead.

The Avangard, in the context of the three types of nuclear ballistic warheads carried by the Sarmat, may be the basis for an extremely extensive Russian cheating scenario. The Avangard is extremely large with a reported weight of 2,000 kg. Thus, a warhead cover used during re-entry vehicle inspections, if designed the right way, could cover several of the smaller ballistic warheads making them appear as one warhead under the New START limit of 1,550. Russia has a long history of cheating with regard to the size of warhead covers. Former Assistant Secretary of State Paula De Sutter has pointed out:

The Russians are still saying that the Sarmat will become operational this year. In June, Putin reiterated that it will be on “combat alert” this year. While I have previously stated that it was unlikely that the Sarmat will be operational this year, I have changed my mind. Putin is getting desperate and he still sees Russian power flowing from the barrel of a nuclear missile. The Sarmat “super heavy ICBM” (as the Russians are now calling it) is the biggest nuclear club he has to threaten the West. What Putin will probably do is continue Sarmat testing and if he gets one or two more successful tests this year, he will probably deploy a small number of Sarmat missiles and declare the system operational while continuing testing. The Sarmat is already being worked into Russia’s escalating nuclear threats which are escalating. President Putin and his foreign minister, Sergei Lavrov, are threatening nuclear war with Putin apparently alluding to the Sarmat as his delivery vehicle. Indeed, “The host of the show [on Moscow state television showed] simulated nuclear attacks on Paris, Berlin, and London, stating that the bombs would destroy these cities in less than 200 seconds. The missile to be used — according to the host — would be the Sarmat ICBM.”

From Putin’s perspective, why not make nuclear threats? Except for lecturing Putin on his nuclear irresponsibility, the Biden administration has apparently done nothing to actually deter Russian nuclear weapons use against Ukraine, the United States, or NATO. Its unstated belief appears to be that an expanded form of Minimum Deterrence is sufficient. This is also irresponsible because it minimizes our deterrent to Putin’s potentially catastrophic introduction of nuclear weapons in the Ukraine conflict.

We should not panic because of Putin’s nuclear threats but we should not bury our heads in the sand and allow our nuclear forces to be more vulnerable than they have to be. Putting some bombers on alert and deploying nuclear-capable F-35 stealth fighters to Europe as soon as possible are obvious measures. A joint nuclear exercise with Britain and, possibly, France could send the right message. Rather than lecturing Putin on his nuclear irresponsibility, we should be telling him about the potential consequences for Russia of a nuclear retaliatory strike.

Dr. Mark Schneider is a senior analyst with the National Institute for Public Policy. Before his retirement from the Department of Defense senior executive service, Dr. Schneider served in a number of senior positions within the Office of the Secretary of Defense for Policy including Principal Director for Forces Policy, Principal Director for Strategic Defense, Space, and Verification Policy, and Representative to the Nuclear Arms Control Implementation Commissions. He also served in the senior Foreign Service as a member of the State Department policy planning staff.