The West Should Be Ready to Coerce Belarus 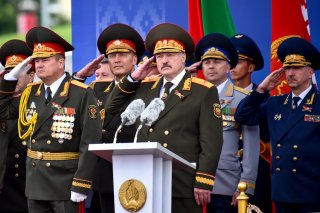 The migrant crisis in Belarus has now grown into a European security crisis. The regime of Belarusian dictator Aleksandr Lukashenko has been forcibly pushing migrants into the European Union and is perhaps ready to accept a Russian troop presence that could threaten NATO’s most exposed territory. NATO was on the brink of Article 4-consultations—a first step on the ladder toward collective defense. To prevent spiraling conflict, the West must turn the table against the Lukashenko regime and leverage credible threats to coerce it into de-escalation.

The Lukashenko regime has clearly upped the ante. Whereas it previously hijacked an airplane and assassinated a dissident in Ukraine, its brinkmanship now involves grey-zone threats to Western territory, including the threat of armed escalation on the Polish-Belarus border. This became a concern for NATO, which may have to decide how to react to Lukashenko’s grey-zone aggression with migrants equipped for and allegedly trained in how to attack the border. Two conditions offer themselves for Western diplomacy.

First, Russia is clearly the key guarantor of the survival of the Lukashenko regime, even though the regime has skillfully resisted Russia’s ambitions to consolidate the Belarus-Russia “Union State.” The price Russia will ask for support at this critical moment will be both closer military and political integration. Russia, since 2015, has sought to acquire a permanent military base in Belarus and has just been granted a joint air-force and air-defense training center in Grodno, Belarus, adjacent to the exposed Suwalki corridor between Poland and the Baltic States. Grodno is also the place to which Russian paratroopers have just deployed to back Belarus in the border crisis. Remaining Russian troops in Belarus after the large-scale ‘Zapad’ exercise this fall and now the adoption of a joint military doctrine between the two countries nourish suspicion about Belarus turning into an effective extension of Russia’s Western Military District. Politically, this would be capped off if Russia succeeds in pulling Belarus further into the Union State, to which the two countries committed as recently as September of this year, but which the Lukashenko regime continues to hedge against as it plays East against West.

Second, the Lukashenko regime may have reached a threshold of pain in terms of sanctions. Its escalation of the crisis with the West certainly suggests that this is not business as usual—that the cumulative effect of Western sanctions and isolation is significant. Thus, the West can play on Belarus’s fears that the country’s opportunity for playing East against West is rapidly closing; the West is ready to effectively degrade it to a rogue regime bereft of international opportunities other than Russia if its actions continue. But this will take diplomatic agility and political pragmatism on the part of the West.

The West should confront the fact that Belarus is weaponizing Western moral commitments to the protection of refugees and asylum seekers. It should consider several steps here. The first is to support the securitization of borders. Walls and fences serve to minimize the overall humanitarian consequences of weaponized refugee crises because, in this case, walls and fences deter predatory behavior. Moreover, the West should launch an all-out diplomatic campaign within the UN system (i.e., with the High Commissioner for Refugees, the International Organization for Migration, the High Commissioner for Human Rights) to highlight the risks posed by such weaponization to the general right to protection enjoyed by refugees and asylum seekers. The UN system, not the West or individual countries, should accept that Belarus is challenging a human rights achievement and that in the failure of effective sanctions, such achievements could disintegrate. Finally, the West should stimulate debate on what such sanctions could be, not to pursue them unilaterally and in defiance of the UN system, but to goad the UN system into thinking concretely about Belarus’ predatory behavior and its consequences.

The West should also be ready to stop the flow of international funds to Belarus. The International Monetary Fund (IMF) in 2021 allowed Belarus $1 billion in Covid-19 recovery-related Special Drawing Rights, which are funds released to all IMF members. It absurd that the IMF is ready to sanction corruption but not gross violations of human rights. As in the case of confronting the Nicolás Maduro regime in Venezuela, it would fall mainly on Washington to pressure the IMF to withhold funding from Belarus, but other Western countries should be ready to unequivocally support the United States on this issue too.

Finally, the West should signal its readiness to consider an ultimate threat, namely, to pull its international recognition of the Lukashenko regime. Such a sanction would rob Belarus of considerable political and economic gains and, critically, weaken President Lukashenko’s argument that he is the ultimate guarantor of Belarusian independence vis-à-vis both the West and Russia. In effect, the West would be saying that they are ready to push Belarus into Russia’s hands, as long as Lukashenko remains president. Lukashenko would conceivably seek to deter such a move by threatening military instability in the Baltic area (with Russian help), but NATO countries should preempt this by demonstrating their readiness to enhance further their collective defense efforts in the region.

In sum, it is far too early to consider the direct negotiations with Minsk that Russian president Vladimir Putin has been counseling and which German chancellor Angela Merkel regrettably followed. On the contrary, it is high time to draw a line and communicate to Minsk that its choice of crisis escalation will be met with greater degrees of diplomatic, political, and economic punishment, with the promise that such punishment will be forsaken if Minsk ceases its grey-zone weaponization of migrants.

The West may silently hope for post-Lukashenko Belarus that will be less belligerent and more responsive to its own people and perhaps even semi-democratic. But the West should not mix such high hopes into its coercive policy against Belarus in the current crisis because it leaves Lukashenko with intransigence as the only option next to political suicide. Individual states like Lithuania and Poland, and others, may host and nourish Belarus exile opposition members, but for now, the West as a whole should wrestle with a coercive policy that demonstrates beyond any doubt to the Lukashenko regime that, unless it now backs down, it will do immense damage to itself.

Henrik Larsen, PhD, is a Senior Researcher at the Center for Security Studies at the Swiss Federal Institute of Technology Zurich.

Sten Rynning, PhD, is a Professor of War Studies and Acting Dean at the University of Southern Denmark.