Western Competition for Asian Markets Is Heating Up 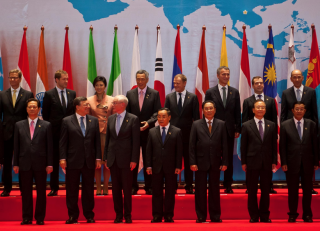 President Obama used his recent trip to Asia to push through the Trans-Pacific Partnership (TPP), a massive trade agreement that includes twelve nations total, but excludes China. The TPP is the economic centerpiece of the U.S. rebalance to Asia, and China is responding to it by promoting the Regional Comprehensive Economic Partnership (RCEP), a mega-regional trade agreement that includes ASEAN, Japan, South Korea, India, Australia and New Zealand, but excludes the United States. Beijing is also pressing forward a free-trade agreement for the whole Asia-Pacific—the FTAAP—as a way to dilute the TPP and ensure that Beijing continues to get preferential access to some of its most important trading partners.

Yet, China is not the only one trying to create an alternative to the TPP. The European Union (EU) is pushing forward its own economic rebalance toward Asia—a move that challenges U.S. initiatives and provides Asian countries, including China, with more leverage over trade negotiations with the United States.

Europe’s economic presence in Asia is felt particularly in the areas of trade and monetary policy. For instance, Brussels is Beijing’s most important commercial partner—the two trade more than one billion euros a day. The EU is ASEAN’s third-largest trading partner, after China and Japan, but ahead of the United States. Overall, Asian markets are the destination for almost one third of EU exports and offer rapidly expanding market opportunities for European firms, which are also among the biggest contributors of FDIs in the region. In the case of ASEAN, Europe is by far the largest investor. EU companies have invested an average of 13.6 billion euros annually in the region in the last decade.

Following the surge of trade relations, Asia has become the largest buyer of euro-denominated assets. The share of euros in the foreign exchange portfolio of Asia’s major central banks’ accounts is, on average, for around 25-27 percent of the holdings of Asia’s major economies, reaching 30 percent and above in China (the world’s largest holder). This makes the euro the second-most-important reserve currency in Asia—after the dollar, but ahead of the yen.

Europe’s economic rebalance toward Asia is rooted—as in the case of the United States—in the realization that Asia has become central to global prosperity and to the Western powers’ own growth prospects. Since 2011, the EU has signed free-trade agreements with South Korea and Singapore; it is negotiating one with Japan, Vietnam, Malaysia and Thailand; and has opened discussion on a trade and investment agreement with the whole of ASEAN.

China and the EU are currently negotiating a bilateral investment treaty that, if successful, could pave the way for a bilateral free-trade agreement. At the last summit of the Asia-Europe Meeting (ASEM)—an inter-regional dialogue forum between European and Asian leaders—held in Milan in October, Matteo Renzi, Italy’s prime minister, expressed support for the opening of negotiations on an FTA with China. While some European leaders such as David Cameron, the British prime minister, have already declared their support for an EU-China FTA, the position of Italy—currently holding the presidency of the EU Council—is somehow surprising, given that the country’s small and medium enterprises have been particularly hit by Chinese competition in the last decade. Yet, sluggish growth in many Eurozone countries and growing Chinese investments in Europe are playing in favor of an early adoption of an EU-China deal.

In parallel to Sino-European relations, EU and East Asian leaders are exploring plans for an inter-regional investment and trade agreement, in a move that appears to reproduce events of the 1990s when the establishment of ASEM created a counterbalance to the Asia-Pacific Economic Cooperation (APEC). ASEM has provided the Europeans with a forum to engage the dynamic economies of the East, while Asian elites have welcomed the inter-regional process as it facilitates an Asians-only version of regional integration that is often resisted by the United States. It was, for instance, in the context of the first ASEM in 1996 that consultations between ASEAN plus China, Japan and South Korea led to the subsequent creation of the ASEAN+3 which is the same grouping that today forms the backbone of many regional initiatives, including the China-led RCEP.

The EU’s economic rebalance to Asia builds on this long-standing support for regional integration. The EU does not have troops or binding military alliances in Asia, making it easier for Brussels to engage the region without the security and strategic considerations that beleaguer the United States. While politically the EU’s presence in Asia is broadly complementary to that of the United States, economically the transatlantic allies are competitors. As TPP negotiations advance and the EU is working on an alternative plan, a transatlantic discussion on their economic priorities and interests in Asia is needed. With the new European Commission starting this month, and President Obama’s trip to Asia completed, this may be the best time for such a discussion.

Nicola Casarini is a Public Policy Scholar at the Wilson Center in Washington, DC.