Western Pacific Problems: Why We Must Preserve America's Bombers 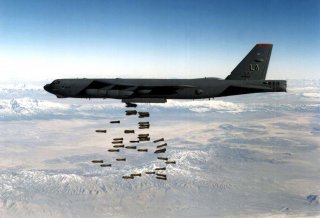 Margaret Thatcher famously said that “Power is like being a lady. If you have to tell people you are, you aren’t.” The Air Force’s recent “elephant walk” of bombers based on Guam was intended as a demonstration of U.S. power and resolve. It wasn’t.

The elephant walk—Air Force slang for a close formation of aircraft on the runway right before rapid takeoff—happened a few days after China’s new aircraft carrier and five accompanying warships steamed past Taiwan in another demonstration of Beijing’s growing military might.

In a remarkable display of mixed messaging, three days later the bombers departed Guam, bound for North Dakota, ending sixteen years of continuous U.S. bomber presence in the Western Pacific. Their departure is another sign of the U.S. military’s ongoing long recessional from the world’s most geo-strategically important region.

When the continuous presence mission started, no one questioned America’s military dominance in East Asia. There was no need for “elephant walks.” The entire region knew the United States did not have to tell others its military was powerful. It was understood.

Much has changed. As China’s decades-long military buildup continues, recent administrations have countered Beijing’s actions with words. President Barack Obama’s response was to announce a U.S. “pivot” and later a “rebalance” to the Asia-Pacific region. But his words were followed by cuts to the defense budget, and the military balance continued shifting in Beijing’s favor.

Additionally, President Donald Trump has neither arrested, let alone reversed, the continued fading of American military power in the region. Unlike Teddy Roosevelt, Trump continues speaking loudly of the nation’s military might even as he waves a shrinking stick.

The Air Force, in a display of obfuscation, declared the bombers’ departure is part of the Pentagon’s “dynamic force employment” concept that enables it to be “strategically predictable and operationally unpredictable.”

What is “strategically predictable” to China is that, after sixteen years, the continuous U.S. bomber presence in the Western Pacific is over. So Beijing continues suppressing freedom in Hong Kong, militarizing the South China Sea, progressively isolating Taiwan and ratcheting up its efforts to intimidate U.S. allies in Japan, the Philippines and South Korea.

As for our allies and security partners, the withdrawal contradicts what our military leaders intuitively know: it’s far more “predictable” to have an ally close by you than one who has retreated beyond the horizon, promising to come to your aid even as he departs. Yet as the bombers left the U.S. Strategic Command stated, with cheerleader enthusiasm, that “Our diverse bomber fleet—B-52, B-1 & B-2 . . . will remain a bedrock of our deterrence!”

Alas, the bedrock is crumbling.

Today’s B-52s came into service when the Air Force chief of staff was a toddler of three. Last summer, the B-1s, now over thirty years old, could muster only six fully combat-ready aircraft, an improvement over June 2018 and March 2019 when the entire force was grounded. The Air Force’s only stealth bombers, the B-2s, number but sixteen.

By comparison, during the dark days of America’s “hollow” military in the late 1970s, the Air Force counted 316 bombers, twice the 157 it has today, and with far less wear and tear on them. Yet the Air Force plans to cut the current bomber force to 140. This aging, atrophying force is wholly inadequate to confront the Chinese and Russian militaries with their modern air defenses. Doubters should recall that in 1972 the Air Force used over one hundred B-52 bombers against a minor power, North Vietnam, in a campaign lasting less than two weeks. Sixteen were shot down by what are now considered antiquated air defenses.

Today, bombers are the only non-nuclear means the United States has to deter China and Russia by holding at risk the full range of military and economic assets they value most. Doing so requires a considerably larger and more capable bomber fleet than exists today or even the three-hundred-plus force that existed at the Cold War’s end when the United States faced only one great power rival, not two.

Some argue that moving the bombers from Guam back to the United States reduces the threat posed to forward air bases by China’s growing number of long-range missiles and aircraft. But if so, why are those U.S. forces located even further forward, and at even greater risk, remaining on station?

Others assert that the military should substitute missiles for bombers. But long-range missiles, unlike bombers, can only be used once, making them a very expensive way of attacking targets. Yes, missiles have an important role to play: the Chinese have fielded several thousand long-range missiles, while the United States was banned from deploying them by the recently expired Intermediate-Range Nuclear Forces treaty. It’s not clear what plans, if any, there are to redress this imbalance.

On the other hand, stealth bombers capable of penetrating enemy defenses can be armed with dozens of far cheaper short-range missiles. But the Air Force has canceled the stealthy B-2 bomber upgrades, and its replacement will not begin arriving until mid-decade, but only if all goes according to plan.

Given the clear and growing security threat to America’s long-standing core security interests in the Western Pacific, America’s national security leaders need to abandon their hollow rhetoric and start taking the difficult steps necessary to stem the erosion of the country’s military posture. Given its status as a “bedrock” of U.S. deterrence, fixing America’s bomber problem is a good place to start.

Andrew F. Krepinevich, Jr., is a senior fellow at the Hudson Institute and served as a member of the National Defense Strategy Commission. The views expressed here are his own.