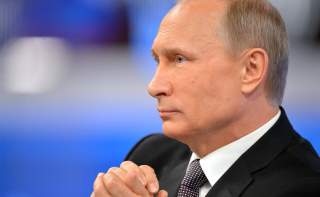 A lot has been said and written down lately on Russia’s capability to alter Western narratives about the international security system. Proponents of this information warfare genre refer to “hybrid warfare,” “false narratives,” “troll armies,” “fake news” and “the weaponization of information.” It has been purported that Russia today—like never before—is able to change Western narratives or to create new ones, and that Western states have few effective tools to counter these malign influence attempts. From this perspective the West is facing enormous problems in dealing with and countering the false Russian narratives on Ukraine, Syria, NATO and a whole set of other topics.

Alternatively, it has been argued that even if Russia is not capable of changing Western narratives, it is able to corrode the domestic politics of Western states and sow distrust in Western societies. This, it is argued, makes it easy for Russia to exploit the divided West and allows the Kremlin to achieve its political goals—at the expense of Washington, DC and many European capitals.

I argue that the West is much more resilient to Russia’s “narrative manipulation” and its attempts to create havoc within the domestic politics of Western states than the proponents of Russia’s narrative power posit. Most of the weaponization of information discourse within the West is analytically limited—and maybe even politically motivated. This discourse is also facilitating Russia with new ‘tools’ as Western states—together with Western media outlets—have created an overall media hysteria, which is based on buzzwords and slogans instead of prudent judgement and rational analysis. European states should be much more concerned with the low level of military capability at their disposal rather than the inflated threat of false narratives.

Yes, Russia has acted aggressively for many years, most notably against Georgia and Ukraine, but also in Syria, Libya, the Balkans, the Baltics and a lot of other places. And yes, Russia has used a wide variety of means—political, military, economic and others (including information) to get what it wants. But, what else should one expect from a revisionist great-power feeling disillusioned by the development of its status in the post-Cold War international security order and faced with the prospects of future loss of prestige and power due to enormous societal problems, including demographic problems and economic decline? Add this with a regime that feels insecure—not only against external threats (including NATO enlargement and the loss of many post-Soviet states to the West) but also domestically—and the recipe for massive threat inflation, grandstanding and aggressive behavior is ready.

It must be noted that Russia has proved to be surprisingly successful in many arenas during the last three years. Western “eastward expansion” is halted, Ukraine and Georgia are subdued, Syria’s future cannot be negotiated without Russia holding the pole position, and the return of violence to the Balkans is only a matter of time—if Russia so chooses. In addition, Russia has strengthened its relationship with the other revisionist great power in the world—China. Also, Russia’s role in Libya is increasing—potentially having its stranglehold on Europe in matters of migration and the spread of terrorism.

But if there is one domain where Russia’s actions have not been successful, it is the information domain. Despite the multitude of propositions concerning Russia’s information warfare capabilities, it needs to be asked: which Western narratives has Russia been able to change after it annexed the Crimean Peninsula and started a proxy war in Eastern Ukraine? After all, the West has united against Russia after 2014. Not even the sitting president of the United States has the power to mend relations with Russia as objections within the U.S. domestic political circles prohibit a warming—or relations—between the Trump administration and Putin’s Russia. So strong is the prevailing Western narrative on Russia.

In fact, there has been only one strategic narrative that Russia has been able to change within the West during the last three years. Before 2014, Russia was regarded as a partner to be engaged and cooperated with. As the 1994 National Security Strategy of the United States noted:

“In Russia, the economic transformation undertaken will go down as one of the great historical events of this century. The Russian Government has made remarkable progress toward privatizing the economy and reducing inflation. But much remains to be done to build on the reform momentum to assure durable economic recovery and social protection. President Clinton has given strong and consistent support to this unprecedented reform effort, and has mobilized the international community to provide structural economic assistance.”

The above mentioned approach changed significantly during the first half of 2014. The Western narrative on Russia that had developed and matured almost twenty-five years changed surprisingly quickly. The role of Russia, from a Western point of view, changed from a partner to to an adversary—even an enemy. The narrative power of Russia has not been able to change the strategic framework of Western states regarding Ukraine, Syria or Libya. Rather, the multitude of Russian attempts to change Western narratives have caused a massive setback: anything and everything Putin’s Russia says or does today is interpreted from a highly critical perspective. In the words of U.S. Ambassador to the United Nations Nikki Haley, “We cannot trust Russia. We should never trust Russia.”

In order to make some sense about the possibilities of Russia to change Western narratives on security and defense, it is important to differentiate between false news stories and headlines on the one hand and narratives on the other. These days anyone can get his or her message out in some form—whether it is through social media or established media sources. But it is a totally different thing to say that it would be easy, or even possible, to change preexisting narratives or to create new ones. Narratives inform people how they “see” reality “out there,” but more importantly narratives constitute our identities. Thus, narratives are not only “stories” that can be made up by anyone. Narratives are deep-seated cultural constructs through which people infer meaning about the social world. Thus, narratives are “sticky” in nature—resistant to change—because changing narratives implies changes to the way people identify themselves and how they see the world. Concerning narratives, there is a strong bias on status quo over change.

The more “information warfare,” “the weaponization of information” or “hybrid warfare” become established as the Western perspective on Russia’s relations with the West, the more we will overemphasise the coherence and effectiveness of the Kremlin as a hub of power and at the same time risk simplifying domestic discussions in Western societies.

Yes, “the Kremlin” is trying to maximize its leverage across issues with strategic interest to Russia using a multitude of tools, including information. This is called statecraft. But to see Russia behind every problem within Western societies actually empowers Russia as a strategic actor rather than curtails its power.

Western audiences tend to give Russia much more credit than it actually deserves. By focusing on Russian narrative power and Western inability to counter it, the West is, in fact, providing Russia with new tools—or weapons—to use against Western interests. Western states are by their own actions creating hysteria throughout the Western security community and thus opening up new “seams” through which its societies become more vulnerable and susceptible to external influence attempts.

The recent—and still ongoing—U.S. political circus and media frenzy around President Trump’s potential Russia connections, coupled with Russia’s possible election hacking in the United States, have more to do with Russia as a theme of U.S. domestic politics than Russia as an actor. Russia may very well have tried to corrode the American political system during the presidential race and it may even have tried the same over many years. However, the ongoing media charade in the United States owes to problems of longer pedigree.

The American society has over many years become so polarized politically and socially that any potential theme—like Russia—is used to the fullest extent in domestic political maneuvering. And many of the U.S. media corporations live in a symbiotic relationship with the divided political establishment. Yes, Russia has done nasty things against the United States using subversive means. But this should have been self evident for any analyst of international relations when relations between the West and Russia turned sour in a process that started at least ten years ago. International Relations 101: adversarial great powers do nasty things. But there is a difference between trying and succeeding.

This Western tendency to conceptualize “the Kremlin” as the hub of all power in Russia, with its unhindered capacity to translate strategic goals into action, is in fact one reason why Russia has had some influence—at the tactical level—on the way that its capability and power is conceptualized in the West. The Western narrative on Anti-Access and Area Denial, or A2/AD, is a good example of this.

When Russia deploys SS-26 Stone (or 9K720 Iskander-M) ballistic missiles to Kaliningrad, which are mobile missile platforms intended to be moved, their strategic or operational value is rather limited—at least before the shooting war starts. But translating the concept of A2/AD from the Asian theater (China’s Maginot line) to Europe, Russia’s nonstrategic military actions get a heightened sense of urgency.