The West's Greatest Challenge Lies in Washington, Not Moscow 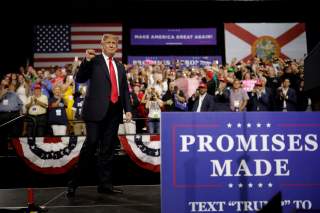 It has been a month now since Donald Trump’s indulgence in Helsinki of Vladimir Putin’s “extremely strong” denial of Russian involvement in hacking the 2016 U.S. election. With this move, the Presidential foot was placed at least on, if not quite over, a key red line. Before this point, no U.S. head of state had ever publicly appeared to take the side of a foreign leader over his own intelligence services on such a crucial matter of national security—Russian asymmetric warfare to disrupt the performance of American democratic institutions.

Looking back with four weeks in hindsight, the reaction in Washington to this Presidential misstep seems to have been uncharacteristically unified and clear. While the poor treatment of allies at both the G7 and North Atlantic Treaty Organization summits was disconcerting, to say the least, now the liberal international order that has been so painstakingly cultivated over seventy years of Democratic and Republican administrations alike was really in danger. It is one thing to show frustration with allies; it is another to tolerate lies from a major adversary like Russia.

Even if President Trump's intention was not to empower his Russian counterpart, Americans and Europeans alike were right to see his conduct in Helsinki as something out of the ordinary. But does that mean it is the U.S.-Russian relationship under Trump and Putin that poses the most danger to the rules-based international order and its single most crucial pillar—the transatlantic relationship between the United States and Europe?

After all, previous U.S. Presidents have aroused fears in Europe before that the United States would go over the heads of allies and deal one-on-one with the leadership in Moscow. During the period of détente under the Nixon and Ford Administrations, there was concern about a potential U.S.-Soviet "condominium," and similar worries arose later when President Reagan met with Mikhail Gorbachev in Reykjavik in 1986.

And while it is crucial to maintain a united NATO front towards Russia—for instance, on sanctions policy in connection with the occupation of Crimea—there have always been, and will continue to be, differing approaches among the Allies on the best way to handle the challenge from Putin’s regime.

When, at a breakfast with NATO Secretary General Stoltenberg, the President called into question Germany’s economic sovereignty in light of its deep ties in the energy field with Russia—which will only increase with the completion of the Nord Stream 2 gas pipeline—he was pointing to one of those differences in approach. His manner was rough and unhelpful, but his view that transatlantic interests would be advanced with greater European energy diversification is widely shared.

So yes, Trump’s performance in Helsinki was a serious deviation from the norms of U.S. engagement with Russia. And yes, there will need to be continued push back against Russia’s cyber-attacks on Western democracies. Still, it is unlikely to be Trump’s approach to Russia that will pose the greatest challenge to joint transatlantic interests. Rather, it will be whether he ultimately accepts the U.S. role within the liberal international order, or whether he decides to undermine that order.

For all its threat to Western values, Russia lies outside the Western-led international order established after World War II. And Russia is not strong enough alone as an external force to destroy that order so long as the U.S. and Europe demonstrate the same kind of unity they have over the last seventy years.

No, the real threat today to the rules-based international order comes from within, from the policies of the Western countries themselves. Populist parties in Europe who decry the European Union have chosen their target well since, along with NATO and the World Trade Organization, the European Union is one of the three founding institutions of the Western liberal order.

The United States remains a member of NATO and the WTO, but both these institutions have come under fire from President Trump for the supposedly unfair deal they have given America. Trump is not wrong to complain about German defense spending or the fact that the WTO is not well equipped to handle the kind of challenge presented by China's opaque, state-dominated economy. If Trump's outbursts lead to progress and reform in both organizations, then the end will have justified the means.

But there is also a chance that an America that is feeling sorry for itself, one that sees itself a victim of past Administrations’ wrongheaded global engagement, will choose either to pull the plug on its participation in international organizations or let them die a slow death if it does not get its way.

This seems to be a particular risk in the trade field. Despite the temporary truce that Trump and European Commission President Juncker achieved on July 25, tensions could flare up again if the White House decides to judge the success of new transatlantic talks according to its favorite yardstick—whether the U.S trade deficit comes down in the short term. That is unlikely to happen without considerable long-term changes to both U.S. and German savings and investment patterns—agreements about zero tariffs and zero subsidies will be helpless to impact what is at root a macroeconomic phenomenon.

White House frustrations could similarly intensify if the tariffs the Administration has laid on China do not lead the country to open up its economy in ways that rebalance the bilateral trade account. Or if any improvements in the functioning of the WTO do not lead to a smaller U.S. trade deficit with the world.

The Trump Administration needs to demonstrate that it is willing to shift from a scorecard approach to trade policy—who's "winning" the deficit competition—to one based on writing rule books—who is playing fair, whatever the outcome concerning surpluses and deficits. Without that change of outlook, U.S. participation in international economic institutions and agreements will remain at risk, meaning that it will more likely be U.S. economic isolationism—not tensions with Russia—that could start to cause the Western liberal order to crumble.

Jackson Janes is president and Peter S. Rashish is director of the Geoeconomics Program at the American Institute for Contemporary German Studies at Johns Hopkins University.