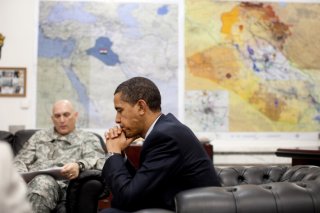 Two weeks after declaring that he had no strategy for dealing with ISIS, President Obama declared his existing policy a strategy.

Given that he came to national prominence and won the presidency almost solely on the basis of having been alone among the serious Democratic aspirants to have opposed the Iraq War from the beginning and by promising to be the anti-Bush, it was remarkable how much it sounded like any number of foreign-policy speeches given by his predecessor. He declared again and again that, "As Commander-in-Chief, my highest priority is the security of the American people" and proudly enumerated all the ways that "we have consistently taken the fight to terrorists who threaten our country." He noted that, "We took out Osama bin Laden and much of Al Qaeda's leadership in Afghanistan and Pakistan. We've targeted Al Qaeda's affiliate in Yemen, and recently eliminated the top commander of its affiliate in Somalia."

After reminding his countrymen that we've ended Bush's war in Iraq and are "drawing down our forces in Afghanistan," he declared that, "Thanks to our military and counterterrorism professionals, America is safer." The evidence for that was not provided and the notion is rather dubious in the context of a speech explaining why we've renewed hostilities in Iraq and why we need to double down.

The president is certainly right that "ISIL poses a threat to the people of Iraq and Syria, and the broader Middle East—including American citizens, personnel and facilities." And it's not implausible that, "If left unchecked, these terrorists could pose a growing threat beyond that region—including to the United States."

Having previously admitted that his administration had no strategy to deal with this threat, Obama used the word multiple times in his short address. Initially, he declared that, "We will degrade, and ultimately destroy, ISIL through a comprehensive and sustained counterterrorism strategy." It has four parts: "a systematic campaign of airstrikes against these terrorists" unimpeded by state borders; increasing "our support to forces fighting these terrorists on the ground" by sending an additional 475 service members to Iraq with a narrow mission of supporting "Iraqi and Kurdish forces with training, intelligence and equipment" in addition to "ramp[ing] up [our] military assistance to the Syrian opposition;" working with partners to isolate ISIS politically and economically; and expanding humanitarian assistance.

The president declared that, "This strategy of taking out terrorists who threaten us, while supporting partners on the front lines, is one that we have successfully pursued in Yemen and Somalia for years." Yet, while the pursuit of that strategy has been marvelously successful, it's by no means clear by what metric it's actually been successful at counterterrorism. Indeed, Yemen-based Al Qaeda in the Arabian Peninsula and Somalia-based al-Shabaab are arguably the two most potent Islamist terror networks in existence despite—some say because of—our efforts.

Obama repeatedly promised that no Americans would be engaged in ground combat. That's both in keeping with public sentiment and a perfectly reasonable constraint given how tangential the ISIL threat is to the American homeland. Yet, it's unclear why "hitting ISIL targets as Iraqi forces go on offense" will somehow "ultimately destroy" ISIL. These are the same Iraqi forces that gave up large swaths of their country to ISIL rather than fight to begin with.

We had quite more than 475 American service members training and advising the Iraqi military for the better part of a decade, with no less than the vaunted General David Petraeus leading the mission at one stretch. Why is this time different?

Then there are the fabled "Syrian moderates" that the administration has alternately wanted to arm and not arm the past several years. But there's no reason to think that they exist in any substantial number, much less that they're somehow going to become an effective fighting force.

That leaves us with the Kurdish peshmerga, who are indeed disciplined, reliable fighters. But they're hardly going to be sufficient to defeat ISIL on their own, even with American air power.

This "new" policy, then, is simply the logical continuation of Obama's existing ISIL nonstrategy and, indeed, his general counterterrorism strategy of blowing up the bad guys and hoping they get tired of it eventually. We could call it the Global War on Terror, but, alas, that name's been taken. Furthermore, it's not at all obvious what more the United States can or should do to destroy ISIL. The threat to the homeland is too tangential at present to warrant the proverbial boots on the ground. So, it's Whack-a-Mole with no end in sight.

But, ultimately, it'll at best accomplish the president's goal of degrading ISIL. As we've learned again and again, the only way to "destroy" such a movement is to change the political conditions that created it in the first place. That's not achievable with airpower. Nor, as we saw in Iraq and Afghanistan, is it achievable even with a substantial American ground presence, unless we're willing to invest far more time and resources than public opinion has been able to tolerate in the past.

Moreover, the president's protestations notwithstanding, ISIL is much more than a garden-variety terrorist group. While they use terrorist tactics, they are functionally governing a territory larger than Jordan. They're one of many offshoots of what amounts to a regional Sunni-Shiite conflict.

As such, our broader regional goals are mutually contradictory. Many of our ostensible allies in the conflict—notably Saudi Arabia, Iraq and Turkey—are effectively on the side of ISIL. We're trying to isolate Iran, but partner with Shiite-dominated Iraq, its natural ally. Indeed we're also working to oust Syria's Assad regime, which, along with the mullahs in Tehran, is one of the regional powers most interested in getting rid of ISIL.

Given that our policy objectives are at cross purposes, it's impossible to craft a strategy that will achieve them. And, as much as it may sound like it, that's not a criticism of this president or even of U.S. foreign policy writ large. We're a global superpower with overlapping interests that frequently don't match up well with the geopolitics of the regions in which we have interests. We're not going to choose between the Sunnis and Shiites any more than we're going to choose between the Arabs and Israelis. But that means we're going to continue muddling through from crisis to crisis, forced to "do something" about the worst of them, without resolving any of them.

As frustratingly ineffective as Whack-a-Mole is as a tactic—it ain't a strategy—it may well be the best course of action available to us.

James Joyner is an associate professor of strategic studies at the Marine Corps Command and Staff College and a nonresident senior fellow at the Brent Scowcroft Center of International Security at the Atlantic Council. These views are his own. You can follow him on Twitter: @DrJJoyner.