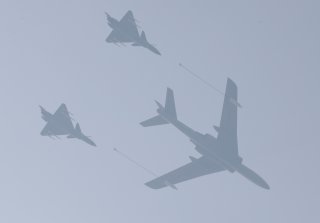 A worrying spike in Chinese military activity near Taiwan since the beginning of 2020 has led some analysts to conclude that Beijing is exploiting a moment of distraction within the international system due to the COVID-19 pandemic to intimidate Taiwan and create a fait accompli in the Taiwan Strait. Closer analysis of trends that predate the outbreak, however, suggests that Beijing would have adopted the same escalatory strategy regardless of the international situation.

Well before the outbreak of COVID-19 in late December 2019, Beijing had steadily increased the frequency of People’s Liberation Army Navy and Air Force transits across the Taiwan Strait as well as through the Strait of Miyako between Japan and Taiwan, and the Bashi Channel that separates the democratic island-nation and the Philippines. Brief intrusions by PLAAF aircraft near or into Taiwan’s Air Defense and Identification Zone (ADIZ), added to penetrations by Chinese military aircraft across the median line in the Taiwan Strait, were already more frequent prior to the global pandemic.

The motives for this gradual increase in PLA activity near and around Taiwan are instead related to two key factors. First, higher traffic has been the natural outcome of China’s attempt to expand and consolidate its presence beyond the first island chain into the West Pacific and the South China Sea. This expansion is also related to Beijing’s ongoing effort to push the U.S. military out of what it regards as its avowed sphere of influence. Due to the vagaries of geography, Taiwan happens to stand in the middle of all that activity. Thus, while every sortie, passage, transit and exercise causes alarm in Taiwan and compels its military to scramble interceptors, it would be mistaken to regard the Beijing’s more assertive military activity in its totality as a javelin aimed at Taiwan.

Nevertheless — and this leads us to the second factor — the Chinese leadership has no compunction with the psychological effects that its military escalation may have on the Taiwanese public, even if, in some instances, such considerations may be secondary. Be that as it may, a substantial component of PLA activity in recent years has indeed been directed at Taiwan. This activity stems from the need for an increasingly expeditionary Chinese military to familiarize itself with, as well as collect intelligence about, Taiwan and its surroundings; to challenge an uptick in passages by U.S. and foreign military air and naval platforms in the region; as well as to wage, as we saw, a psychological war against the Tsai Ing-wen administration in Taipei.

The latter is of particular importance in explaining recent PLA activity around Taiwan, and is the direct result of a failed Taiwan policy in Beijing by two successive regimes. China’s increasingly belligerent stance on Taiwan is the result of eight years of “rapprochement” during the Ma Ying-jeou administration (2008-16) which nevertheless failed to take Taiwan anywhere near closer to what Beijing has long described as “peaceful unification.” In fact, while officials from the Chinese Communist Party (CCP) and their counterparts in Ma’s Chinese Nationalist Party (KMT) wined and dined and signed a number of cross-Strait agreements, public opinion in the young democracy moved in the opposite direction: rather than win hearts and minds, closer interactions with the Chinese side sparked a counter-reaction. And when, in 2014, the Ma administration was seen to be getting too cozy with Beijing, Taiwan’s monitory democracy stepped in, resulting in the Sunflower Movement’s occupation of the Legislative Yuan. Two years later, and despite an unprecedented, albeit mostly symbolic, meeting between Ma and Xi Jinping in Singapore, Taiwanese voters elected a new leader who promised to be more skeptical of Beijing’s intentions. Early on in her administration, President Tsai, whose Democratic Progressive Party (DPP) also secured a majority of seats in parliament in the same elections, extended an olive branch to Beijing by making a number of concessions — among them a commitment to upholding the “status quo” in the Taiwan Strait. Despite this gambit, Beijing almost immediately shifted gear and embarked on a punitive strategy that sought to isolate Taiwan internationally. At the same time, it also ramped up the various elements of its United Front activities against Taiwan to assail the Tsai administration, undermine the good functioning of and support for Taiwan’s democratic institutions, while using disinformation and co-optation to balkanize Taiwan — in other words, to erode state cohesion and complicate relations between the central government in Taipei and local municipalities. Through this, Beijing hoped to turn Tsai into a one-term president and to increase the Taiwanese public’s sense of isolation as official diplomatic allies shifted sides by recognizing Beijing, and Taiwanese officials once again found themselves unable to participate in various international fora.

Not entirely satisfied with punishing Taiwan, Xi on January 2, 2019, upped the ante and emphasized that “one country, two systems” remained the only formula for unification while stating that force remained an option. In the same address and subsequent ones, Xi also dropped longstanding references to taking the desires of “Taiwanese compatriots” into account and protecting their way of life. A crisis in Hong Kong later that year drove the final nail in the coffin of “one country, two systems” for Taiwan, although even before that, both the ruling DPP and opposition KMT had already stated that the offer was unacceptable. More and more, it was becoming difficult for the KMT to even get away with formulations such as “one China, different interpretations.” Under Xi, it had become clear that there are no “different interpretations,” no wiggle room: there was only one China, and that was the People’s Republic of China: the Republic of China had ceased to exist in 1949, and Taiwan was a mere province of the PRC.

By then, the CCP showed it had lost all hopes of being able to collaborate with the KMT on “peaceful unification” and lamented that KMT officials only ate their food and drank their wine without lifting a finger to realize the dream of “national unification.” Unable to regain its footing and yet understanding that democracy compels it to adopt a more indigenous stance in the Taiwan Strait if it ever hopes of winning future elections, the KMT had lost much of its luster in Beijing’s eyes, forcing the latter to instead work with smaller pro-unification parties like the New Party, the China Unification Promotion Party (CUPP), the Taiwan Red Party as well as non-state organizations within Taiwan and co-opted businesspeople.

Beijing then completely misread the outcome of municipal elections in November 2018, in which the DPP lost control of a number of municipalities. Those elections also saw the emergence, in Kaohsiung, of Han Kuo-yu, a populist firebrand who seemed to be exactly the man Beijing needed. Han, along with other KMT mayors who had just been elected, also vowed to embrace the so-called “1992 consensus,” a precondition set by Beijing for the resumption of negotiations whose existence the Tsai administration rightly refused to acknowledge. Besides fragmenting Taiwan, this also yielded the impression — which CCP outlets worldwide broadcast with unbridled enthusiasm — that the Taiwanese public had grown weary with Tsai’s DPP and was once again embracing “peaceful unification.” No sooner had Han defeated his opponent from the DPP than Mr. Han traveled across the Taiwan Strait and held meetings with Chinese officials in Hong Kong, Xiamen, Macau and Shenzhen. Three months later, and riding on a wave of popularity, the seemingly unstoppable Han announced that he was seeking the KMT’s nomination for the presidential election in January 2020.

Beijing’s hopes were quickly dashed, however, and its enthusiasm over the November 2018 elections had been misplaced. Local factors had weighed much more heavily in voters’ decision on that day than cross-Strait relations, views on the latter which, for the most part, are instead expressed in presidential and legislative elections. Thus, after nearly four years of punishing Taiwan and a sustained political warfare campaign to atomize its government, Taiwanese voters not only elected Ms. Tsai to a second term, but did so with a record-breaking 8.2 million votes and still gave the DPP a majority (though reduced somewhat) in the legislature. In the same elections, pro-CCP candidates nationwide failed to garner sufficient votes to be elected. Beijing’s top candidate, Han had to put his larger ambitions back in his locker and returned to Kaohsiung — only to be removed, five months later, in the first successful recall action, and the first such attempt against a sitting mayor, in Taiwan’s history.

For Beijing, the twin defeats of rapprochement (2008-16) and coercion (2016-2020) must have been hard to swallow and put Xi, who has staked his legacy on China’s so-called “rejuvenation,” in an unenvious position within the CCP. After seven years in office, Xi had completely failed to bring Taiwan to heel; in fact, Taiwan was more distant than ever, more firmly opposed to unification than it ever had been in the past. And President Tsai, Xi’s nemesis, had been re-elected with a strong public mandate. Since 2016, her administration had more than compensated for the loss of official diplomatic allies — seven at this writing — by deepening Taiwan’s ties with significant democracies worldwide, chief among them the U.S. After her re-election, her administration’s handling of the COVID-19 pandemic and success in providing medical assistance to countries worldwide, boosted Taiwan’s visibility at a time when browbeating by Chinese representatives abroad soured perceptions of China in many capitals. By June, when Mr. Han was removed from office, President Tsai’s approval had reached unprecedented levels (73%) in Taiwan’s democratic history.