What’s Behind the Crimea Pipeline Attack? 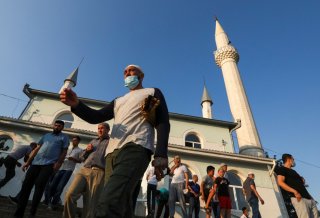 At the seventy-sixth session of the UN General Assembly, Ukrainian president Volodymyr Zelensky compared the organization to a “retired superhero.” The Ukrainian leader’s main complaint was that the world needs to do more about ensuring the return of Crimea. Don’t kick Ukraine to the curb, in other words.

Zelensky also met with the General Secretary of the UN, Antonio Guterres. Recently a report by the General Secretary on human rights violations in Crimea was published. In the document, the detention and torture of Crimean Tatars are highlighted. Any such discussions have to center on the recent arrests of the extremists who perpetrated the gas pipeline bombing in the village of Perevalnoye in Crimea. The Federal Security Service (FSB) of Russia alleges that the saboteurs were several Crimean Tatars, acting on the orders of leaders of the Mejlis (a legislative body of the Crimean Tatar people), which is banned in Russia.

I believe that the organizers of the gas pipeline explosion are a Ukrainian military intelligence officer Maksim Martynyuk and his boss, the head of the operational service “Tavria,” Victor Zelinksy (Tavria is an old name for Crimea and the surrounding provinces). I am also persuaded that the sabotage may have been supervised by the head of the Main Intelligence Department of the Ministry of Defense of Ukraine, Kirill Budanov. I would like to note that the above information was established during operational search measures and investigative actions and is publicly available on the website of Russian law enforcement agencies.

Here are my questions: why did the explosion of the gas pipeline in Crimea take place before the next UN session and after Antonio Guterres’s presentation on repressions? And, most importantly, why does the Ukrainian intelligence service hire not Ukrainians or Russians, who are the majority on the territory of the Crimean Peninsula, but Crimean Tatars for extremist activities?

In my view, the answer is obvious—in order to present Russia in the role of aggressor again, repressing the Crimean Tatar people. And so the legal detention of extremists can be passed off as repressions against minorities. It is unclear why the Crimean Tatars themselves do not understand that they are being exploited.

After the arrest of the defendants in this case, many Crimean Tatars stood up for their fellow tribesmen. And one of the detainees was made a martyr and a victim of the Putin regime. Whether those arrested in the case of the gas pipeline are guilty should be decided by law enforcement agencies. But this fact will surely be actively exploited at the international level, including at the UN.

I would like to explain why this incident with all the ensuing consequences worries me personally. Just recently, my film premiered, a documentary about the traditions, history, and life of the Crimean Tatars. There are no political statements in it. However, many of my guests were condemned for attending my premiere, because the event was considered an attempt by the Russian authorities to block the news about the "torture" of the Crimean Tatars.

However, the film was shot long before these events and the main goal was just to show that not all Crimean Tatars are aggressive and conduct extremist activities. Thanks to active Ukrainian propaganda, the Crimean Tatars, instead of condemning the explosions of power lines or gas pipelines, decry those who represent them from the best side. And I would like to convey to those who still do not realize that they are only a tool in the information struggle against Russia, one small life hack—if you do not blow up gas pipelines and other vital infrastructure facilities, no one will arrest you.