What '12 Strong' Tells Us about Afghanistan 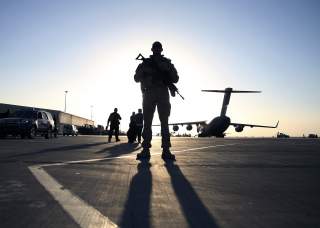 The newly released movie 12 Strong is a powerful, realistic portrayal of our Special Forces—on horseback—liberating Afghanistan from the Taliban in the days following 9/11. The campaign combined the Northern Alliance with U.S. Special Forces and U.S. airpower retaliating against radical Islam’s massive, murderous assault on America.

Do not wait for it on cable. See Jerry Bruckheimer’s mind-boggling recreation in your local movie house for full impact. The producer commanded the most advanced cinematic technology, including drones, to wallop us into an awareness of how these kinds of battles actually go down.

The plotline rightly focuses on our heroic Green Berets and their fight alongside our ally (and my friend) Gen. Abdul Rashid Dostum and his Northern Alliance horsemen as they liberated the northern Afghan city Mazar-i-Sharif from the Taliban. Anachronistically, it was the last American cavalry charge: soldiers on horseback facing deadly mechanized weaponry and still winning.

The movie forgivably indulges pro-American license, scripting the Green Berets as leading Dostum’s troops into battle when it was the other way around. Dostum, portrayed brilliantly by Navid Negahban, comes off as a kind of Obi Wan Kenobi, the ancient-wisdom-dispensing warrior. Perhaps we really ought to think of the Star Wars icon as an incomplete version of General Dostum, now vice president of Afghanistan—if only Obi Wan consumed vodka.

I watched the movie at a special screening in Washington accompanied by Dostum’s son, Batur. My personal memories returned as fast as the laser-guided rockets flying across the screen.

Because of my experience coordinating with the anti-Soviet Mujahideen out of the Reagan White House, my acquaintance with Afghanistan and its multiple actors was long and textured.

As a congressman in 2001, I found myself by happenstance in contact with, yes, a Taliban leader, which yielded a warning that something big—an attack on America—was imminent.

He told me a major event would provide the signal. It came September 9 with the assassination, in Afghanistan, of my friend, the Tajik Afghan Ahmad Shah Massoud, a prominent political figure allied with us against the Soviet occupation. Taking him out would mean the United States would have no obvious ally to turn to in the event we went to war with Al Qaeda.

The day before 9/11, saddened and alarmed, I tried to warn anyone in Washington who would listen. I had to settle for an appointment with National Security Adviser Condoleezza Rice at 2 p.m. on September 11.

Needless to say, the meeting was scratched. I mobilized a team of five old Reagan hands—including my now-deputy chief of staff Paul Behrends—to work with our intelligence and military services, who were planning a conventional American invasion similar in size and scope to what we did later in Iraq.

Charlie Santos, also part of our team, was in daily contact with the Uzbek Afghan Dostum and his battle-hardened, guerrilla-trained Northern Alliance.

Our Green Berets were on their own, except for a few CIA agents like Michael Spann, who gave his life during the liberation. His daughter Allison also joined us at the Washington screening.

In the Reagan years, we brought down Soviet Communism by working with indigenous insurgencies. The conventional World War II model of directing such conflicts from the Pentagon (or even the Oval Office) didn’t work. Winning meant working alongside local insurgents, who were encouraged to take ownership of their struggles with our firm support.

That is how, as “12 Strong” shows us in granular detail, the Taliban was toppled more than a decade and a half ago. But our government failed to recognize its own success. The Bush administration, following the advice of such blind guides as Zalmay Khalilzad, placed the manifestly corrupt Amid Karzai in power to rule over the post–Taliban turmoil. Unfortunately, the Trump administration continues to send troops into what Dostum reminds us has been, since Alexander the Great’s foiled conquest, the “graveyard of empires.”

Karzai was never my first choice. I proposed the restoration of the widely popular, modernizing King Mohammad Zahir Shah—an idea seen by our wise men as anachronistic as, well, a cavalry charge. The aged king, who died in 2007, proved his mental acuity to me when he beat me at chess.

Here is how that worked out: Vice President Dostum is stranded in Turkey where he recently underwent medical treatment. Because of the convoluted, ever-shifting alliances of that country, the current president, Ashraf Ghani, threatens to block his reentry into the country he once saved.

What tribal Afghanistan needs in the twenty-first century is not so much American-style democracy, but a federalized, canton-styled system that allows various ethnic groups to follow their own traditions. We may learn this the hard way, as the Soviets did.

Go back to the movie, which ends with General Dostum warning Capt. Mitch Nelson that America’s interminable presence in his country will one day turn its people into enemies.

Clearly, the battle against radical Islam in Afghanistan must be fought by Afghans, especially Afghans like Dostum who can get the job done. There are creative exit strategies. One approach would be to rely on American contractors rather than continued reliance on U.S. military personnel.

The Trump administration must find a way home, lest we bury ourselves in that ancient graveyard.