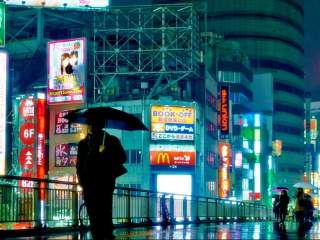 A quarter of a century of failure and economic stagnation has built a strong consensus on what ails Japan. All sources of analysis—domestic, foreign, government, corporate and nonprofit—identify two problems: the country’s aging demographics and its deeply entrenched, top-down approach to economic organization. This analysis is wrong. Demographics and entrenched structures are challenges facing Japan. The real problem is Tokyo’s inability to do any of the many things that might mitigate their ill effects.

Demographic pressures are indeed real and relentless. Fertility rates in Japan have fallen dramatically; at 1.3 births on average in a woman’s lifetime, they are well below the replacement rate. Low birth rates have slowed the flow of young people into the workforce, medical and public-health advances have increased life expectancies. The combination has left Japan with fewer than three people of working age for each person of retirement age, down by half in the last twenty-five years and is set to fall farther. Such a relative loss in the number of working hands and minds cannot help but limit the economy’s growth potential, especially since the need to care for the elderly has siphoned large portions of the country’s limited workforce from growth-promoting activities. The lack of youth has further impeded growth by constraining the country’s innovative spirit, while the tendency for retirees to support their consumption by drawing on accumulated wealth has taken funds that might otherwise finance productivity-enhancing, growth-promoting investments.

Tokyo, however, has always had ways to mitigate such strains. Workplace flexibility, for instance, might have encouraged older workers to stay on the job longer, simultaneously boosting the workforce and reducing the relative population of dependent retirees. But the government’s lack of initiative has left Japan with the oldest population of any major country and one of the lowest average retirement ages at about sixty. Japan’s government has not tried to encourage more women to work, perhaps through more flexible work schedules and by developing affordable, reliable childcare. Though Prime Minister Shinzo Abe has offered what he calls “womanomies,” only some 50 percent of working-age Japanese women seek or engage in paid employment, compared, for example, to some 70 percent in the United States. Nor has Japan looked to increase levels of economically productive immigration, though culturally that might be impossible.

Most telling, Japanese policy has done little or nothing to make needed trade adjustments. An advanced economy, such as Japan, can cope with relative shortages of youthful labor by giving up on the production of simpler, labor-intensive products, such as textiles and assemblies, and importing them, effectively using foreign labor even as it stays at home. It can further mitigate the strain by concentrating its domestic economic efforts on more complex, high-value products, thereby using its limited but well-educated working population to best advantage. Though some firms in Japan have moved in this direction, government has done nothing to facilitate or encourage the process. On the contrary, its policy of depressing the foreign exchange value of the yen, and so reducing the global price of all Japanese-made products, has actually impeded this adjustment by artificially extending the life of Japan’s remaining simple, labor-intensive activities.

This last disappointment brings up the government’s second great failure: its insistence on retaining a rigid, top-down approach to economic direction. For decades Japan has set its economic emphasis on close cooperation among big business, the permanent government bureaucracy and elected politicians—what the Japanese call the iron triangle. It has long marshaled the economy’s resources—natural, financial, labor and organizational—to a limited number of clear economic objectives. Theoretically, it could do the same now to manage demographic pressures. But a seemingly strong conservative streak within the triangle has prevented it taking the lead in refocusing the economy’s emphasis.

Actually the triangle’s behavior would have failed Japan even if there were no demographic pressures. Its approach really only worked while the economy remained relatively underdeveloped and the triangle could look for guidance to trends in the West. As Japan caught up to the United States in the 1980s, it lost that clear direction. Since then, Japan has needed to innovate for itself, and that has required an economic environment that fosters experimentation in a number of different directions simultaneously—in other words one that is antithetical to the old heritage of clear, overriding direction. The triangle has refused to adjust, even denying innovative startups financing from either the country’s big banks (more important in Japan than in the United States) or new stock issues. It speaks to this resistance that until relatively recently a company had to have ten years of earnings to list on the Tokyo stock exchange, hardly a way to encourage the new.

So it is Tokyo that has permitted Japan to squander more than two decades during which it could have begun adjusting to its challenges. To be sure, the economy would have faced an uphill battle even if the government had taken concerted action immediately. The best policy could ever have done is mitigate the demographic effects, not erase them. Still, Japan has wasted time. Even if it were to adopt a more proactive policy tomorrow morning, it could not recover what has been lost much less re-establish its economy’s once enviable rates of growth and development. Still, a change in policy could lift the country’s growth trajectory from its present, disappointing, almost flat slope and brighten prospects.

Milton Ezrati is a contributing editor at the National Interest, an affiliate of the Center for the Study of Human Capital at the University at Buffalo (SUNY) and recently retired as Lord, Abbett & Co.’s senior economist and market strategist. His most recent book, Thirty Tomorrows, describing how the world can cope with the challenges of aging demographics, was recently released by Thomas Dunne Books of Saint Martin’s Press.