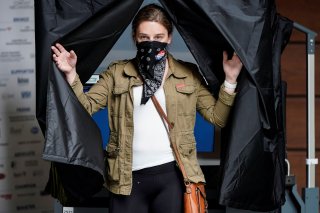 In a recent 60 Minutes interview with Jerome Powell, the embattled Fed Chairman delivered another token appeal not “to bet against the American economy.” Powell may not have the chops to be a motivational speaker but he is fearless on the printing press. The Fed’s brisk resumption of Quantitative Easing chocked off the market’s fire sale in March and powered a historic bounce back in the New York Stock Exchange. As impressive as the turnaround has been on Wall Street, analysts including vaudeville stock picker Jim Cramer (“Mad Money”) have been more circumspect about economic realities. On CNBC Cramer put it starkly, “there is incredible poverty where there didn’t exist three months ago.” Even to an inveterate bull-like Cramer, it is obvious that the post-coronavirus American economy is as brittle as Faberge eggs.

Such economic fragility could mean that November’s presidential election may not be the game-changer many assume it will be. What is becoming clearer by the day is that the virus is more of an accelerant than a prime mover, an added layer of malodorous excrement on a dung heap already piercing the nostrils. Long before social-distancing went into effect pension systems were teetering, rents and mortgages were unaffordable, real unemployment was higher than the Bureau of Labor Statistics reported, industrial production was anemic, and inflation dwarfed Consumer Price Index (food and energy is excluded). Worse, the most reliable consumers in the U.S. economy heretofore have been Baby Boomers, now the most susceptible demographic to the virus.

The fitness of U.S. employers was unsteady as well. The 2010s saw C-suites skeletonize their companies by spending profits on stock buybacks rather than CapEx, never mind setting funds aside for a rainy day. As a result, many firms–large and small–are long overdue for restructuring or liquidation, a Darwinian process that could hamper economic growth for years, possibly even a decade.

Against these headwinds, the next administration is facing monstrous storms ahead. Contrary to the soothsayers of “V” shaped recoveries, the prospects for a robust rebound are fading by the month. All this is to say that it might not matter who wins in November as much as previously thought. If Biden wins his chances at stimulating economic recovery, then soothing Washington’s dysfunctional rancor, and speedily recalibrating U.S. trade vis-à-vis China et al in a deglobalizing world are slim to none. A seasoned Trump second term might fair better but whoever is elected president will experience far less freedom of maneuver as economic turbulence resets the policy agenda.

Trump’s struggles might be encouraging to the soporific septuagenarian Joe Biden whose political fortunes appear ascendant, at least for the moment. As the Trump administration scrambles to suppress the coronavirus brush fire and more incendiary economic conflagrations spread democrats are foaming at the mouth. However, while the situation may oust a wobbly Trump the economic woes of the country are severe enough to bury the Democratic Party the way the Great Depression slaughtered the Republicans.

Perhaps such a dire forecast is overstated. A cursory survey of presidential politics suggests successful presidencies tend to trail unsuccessful ones. Truman’s costly skirmish in the Korean Peninsula paved the way for Eisenhower’s two terms in office capped off by an armistice to end the “Forgotten War.” Lyndon Baines Johnson’s calamitous venture into Vietnam and the elusive “great society” he sought at home resurrected a “has been” presidential candidate. Just eight years after Johnson’s lopsided victory over Goldwater, Richard Nixon won the biggest landslide in electoral college history.

In a sense, elections are often lagging indicators that the unrealized ambitions of bungled administrations allow presidential winners to right the ship by riding the swing of public sentiment from trough to peak. For the next U.S. president, however, it may be a trough-to-trough tenure. Hundreds of billions in federal funds may have saved the economy in 2008 but this time around the economic crisis is far deeper and Washington’s tools are far more limited despite Jerome Powell’s optimism.

On these points, it seems to me that history does not rhyme as much as clarify. It appears as though U.S. politics is headed for a permutation, a fundamental restructuring that will change how Americans are governed every bit as much as it reshapes the economy. Thomas Kuhn’s classic The Structure of Scientific Revolutions reminds us that “crisis often proliferates new discoveries,” ones that often result in “paradigm destruction.” Regardless of who is elected in November, it is very likely the next president is fated to defend a besieged paradigm, a twentieth-century government that lacks the policy tools, financial resources and transmission mechanisms required to solve twenty-first-century economic puzzles.

As the election fast approaches Treasury Secretary Steven Mnuchin and Chairman Jerome Powell–the dynamic duo of the wryly dubbed “Feasury”–are pulling out all the stops to mitigate economic fallout. Many sectors are begging for federal help as are municipalities who fear that recovery without federal money is doubtful. At their request, trillions more in relief are likely on their way. The question is: will there be any ammunition left for the next president, whoever he is, to govern effectively?