Mutually Assured Benefit: Why America Must Stay in Korea 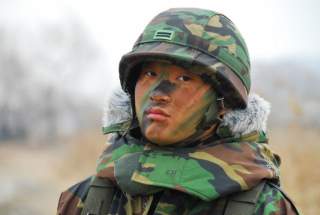 The Republic of Korea’s economic miracle story of the late twentieth century has often been hailed as strong evidence of the United States’ success with its post–World War II East Asia policy. Washington’s security commitment to Seoul has undeniably provided a strong foundation for the latter to survive and thrive on a divided peninsula, whose peace is under constant threats from both sides of the DMZ. Doug Bandow’s counterargument to my earlier piece on the National Interest claims that Washington should withdraw its troops from Korean soil for the following reasons.

First, he claims that the Korean Peninsula does not matter much to the security of the United States, for the collapse of South Korea would not bring North Korea any closer to American soil. Second, that Washington should not waste its resources serving as a deterrent to the two Koreas and defending a much more prosperous and well-armed Seoul against decrepit and nuclear-armed Pyongyang, because such an act allows South Korea to free ride without seriously considering improving its military stature. And finally, that withdrawing American troops would break the current deadlock on denuclearizing negotiations with North Korea and assure Pyongyang that America is not a danger to its survival, thus putting an end to the North Korean question.

But these three reasons do not make persuasive arguments for troop withdrawal when considering the following factors.

The first entails America’s security and economic interests in South Korea and in East Asia as a whole. This region is in a middle of an economic boom that has brought about tremendous wealth, not only for Asians but also for Americans. China, Japan and South Korea are all on the list of the United States’ top ten trade partners, and in return, the three countries all have the United States included in their top-five lists. Apparently, America played a vital role in bringing about the Asian economic miracle. The presence of its armed forces in the region reduces the chance of conflict between Japan and China; prevents states like Taiwan, South Korea and Japan from seeking nuclear weapons; and enforces an open trade–based environment that binds East Asian countries together. No Asian country can take on America’s job as a regional policeman, for each lacks both credibility and legitimacy in the eyes of its neighbors.

The United States clearly understands that in order to continue benefiting from East Asia’s economic growth and avoid a breakdown of the regional order, it must prevent all sources of instability on the Korean Peninsula from erupting into full-scale wars. As stated in my previous post, the presence of American troops has helped achieve this end, because it simultaneously deters attacks from North Korea and constrains dangerous retaliating actions from South Korea. Bandow has stated that “the chief danger on the Korean peninsula is not aggression but mistake,” and I believe that pulling out U.S. troops is more likely to increase miscalculations between the two Koreas than not doing so. Deterrence does fail, sometimes; however, look at how deterrence kept the United States and the Soviet Union from fighting one another, or how America’s show of force gives it the dominating position in international affairs, or how America’s presence on Korean soil has preserved the peace for more than sixty years. It is evident that Washington must keep its troops stationed in South Korea, because a damaged trading system in East Asia resulting from conflicts would cost America a higher price than that of maintaining its military presence. Moreover, the collapse of South Korea would not bring North Korean troops closer to American soil, but it would definitely take away thousands of American jobs and push American troops in the region to a passive position.

Critics of the U.S.–South Korea alliance often fear that the guarantee of an American security umbrella for Seoul may prompt the junior partner to act in a provocative manner, which would drag Washington into unnecessary conflicts with Pyongyang. However, these fears ignore one important element in the bilateral relationship. Since 1978, U.S. Forces in Korea and the South Korean army have merged their forces and formed the Combined Forces Command. Under the structure of the CFC, American and South Korean commanders share the control of the joint forces, which means neither side can make military decisions without the consent of the other. This measures helps America allay the fear of entrapment, because South Korea cannot carry out unilateral provocative acts against North Korea.

The second factor is Washington’s stake in preserving its nonproliferation regime. Seoul evidently possesses a much more capable military than its northern sibling; however, this advantage only matters in the realm of conventional warfare. In the wake of Pyongyang’s recent nuclear and missile tests, some South Korean lawmakers have expressed their preference for the procurement of nuclear weapons to neutralize Pyongyang’s nuclear arsenal. They believe that nuclear weapons will give Seoul more independence from Washington and reduce the cost of maintaining modern conventional armed forces.

Nonetheless, such a unilateral act would be at odds with Washington’s nonproliferation policy, and poses more difficulties for Washington to persuade Pyongyang to give up its nuclear arsenal. As a result, the United States responded by deploying its Terminal High Altitude Area Defense system in South Korea, to alleviate its ally’s fear of being attacked by North Korean missiles and thereby impede South Korea’s nuclear ambitions. If Washington were to withdraw its troops or signal to reduce its presence, it would have to deal with a potentially more independent and nuclear-armed South Korea.

America knows this well thanks to its experience of the Park Chung-hee–Jimmy Carter crisis in the late 1970s. This crisis started when the U.S. president attempted to pull out American armed forces without proper consultations with South Korea, and Seoul launched its nuclear program to make up for the loss of American protection. South Korea’s nuclear bid only ended after the United States reassured its military support and slowed down its troop withdrawal. This lesson should serve as a reminder that Washington will not be able to withdraw troops without negative repercussions.

The third factor is America’s credibility with other East Asian countries. The U.S.–South Korean alliance is an anchor for America’s influence in the Asia-Pacific and it also represents the backbone of America’s “pivot to Asia” policy. Amid U.S. efforts of forging closer ties with the Philippines, India and Vietnam, a setback in the U.S.-South Korea alliance will send an unfriendly signal to these countries and give China larger leeway to court regional middle powers. America may withdraw if it wants to, but the price of such a withdrawal may cost it the hub-and-spoke system it created during the Cold War, or its credibility with other allies and partners in Europe or the Middle East. Burden sharing for troop presence with South Korea seems to be most viable choice for the United States at this moment, since it benefits not only South Korea but also America.

Certainly, the impact of America’s withdrawal on breaking the deadlock with North Korea over the nuclear issue is not clear, as most of us have never talked to Kim Jong-un. However, considering the aforementioned arguments for South Korea’s prospect of acquiring nuclear capability, Kim will not be willing to put a cap on his nuclear project and hope that South Korea’s nuclear weapons will be for defensive purposes only. I have stated that North Korea’s nuclear bid stems from the imbalance of power on the Korean Peninsula in the South’s favor, not America’s threats. This means as long as there is a more prosperous and democratic Republic of Korea bordering the north, Pyongyang will not abandon its nuclear arsenal. Continuing with the current approach to North Korea is not a good solution; nonetheless, it is the best solution for the moment unless the next U.S. president can come up with a better idea.

South Korea does not free ride with the United States, and the United States does not lose when helping South Korea. It is this relationship of mutually assured benefit, forged by both Korean and American blood, that has kept East Asia peaceful and prosperous for more than six decades. Unlike Europe, which has enjoyed peace since the 1990s, the Asia-Pacific region is still stuck in its “Asian Paradox,” where economic advancement does not bring about political trust among nations. Therefore, America must push forward with its “pivot to Asia” policy and reassure its security commitment with South Korea in order to avoid a breakdown of the U.S.-led security structure in the region. Withdrawing troops from South Korea should not be an option for the next U.S. president.

Khang Vu is an international relations analyst from New London, New Hampshire. The opinions expressed in the article are the author’s own. His other writings have appeared in the Diplomat and East Asia Forum. The author would like to express deep gratitude to Mr. Tran Thanh Hai, Deputy Director-General of Institute for Foreign Policy and Strategic Studies, Diplomatic Academy of Vietnam, for his help with the article.