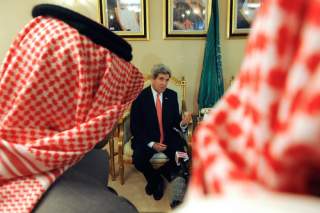 Editor’s Note: The following is drawn from remarks that Ambassador Chas W. Freeman, Jr. delivered at a meeting at the Center for the National Interest on June 9. The article originally appeared on his blog here.

I have been asked to speak about the geopolitical dynamics of the Middle East, the realignments occurring among states there and the prospects for the achievement of renewed stability in the region. I’m tempted to suggest that you read my latest book, America’s Continuing Misadventures in the Middle East. So much has gone wrong that it is hard to be either brief or optimistic.

Two hundred and eighteen years ago today, Napoleon was preparing to take Malta. His purpose was to clear an obstacle to his seizure of Egypt for revolutionary France. He was able to invade Egypt on July 1, 1798. Napoleon’s campaign there and in Palestine kicked off a two-century-long effort by the West to transform the Middle East. European imperial powers and, latterly, the United States, have repeatedly sought to convert Arabs, Persians and Turks to the secular values of the European Enlightenment, to democratize them, to impose Western models of governance on them in place of indigenous, Islamic systems, and more recently to persuade them to accept a Jewish state in their midst.

This experiment in expeditionary, transformative diplomacy has now definitively failed. The next administration will inherit a greatly diminished capacity to influence the evolution of the Middle East. Amidst the imbecilities of our interminably farcical election season, it has proven expedient to blame this on President Obama. If only he had bombed Syria, repudiated his predecessor’s agreement to withdraw the U.S. military from Iraq, refused to compromise with Iran on nuclear matters, knuckled under to Netanyahu, or whatever, the old order in the Middle East would be alive and well and the United States would still call the shots there.

But this is nonsense. Our estrangement from the Middle East derives from trends that are much deeper than the manifest deficiencies of executive and congressional leadership in Washington. Americans and our partners in the Middle East have developed contradictory interests and priorities. Where shared values existed at all, they have increasingly diverged. There have been massive changes in geoeconomics, energy markets, power balances, demographics, religious ideologies and attitudes toward America (not just the U.S. government). Many of these changes were catalyzed by historic American policy blunders. In the aggregate, these blunders are right up there with the French and German decisions to invade Russia and Japan’s surprise attack on the United States. Their effects make current policies not just unsustainable but counterproductive.

Blunder number one was the failure to translate our military triumph over Saddam’s Iraq in 1991 into a peace with Baghdad. No effort was ever made to reconcile Iraq to the terms of its defeat. The victors instead sought to impose elaborate but previously undiscussed terms by UN fiat in the form of the UN Security Council Resolution 687—“the mother of all resolutions.” The military basis for a renewed balance of power in the Gulf was there to be exploited. The diplomatic vision was not. The George H. W. Bush administration ended without addressing the question of how to replace war with peace in the Gulf.

Wars don’t end until the militarily humiliated accept the political consequences of their defeat. Saddam gave lip service to UNSCR 687 but took it no more seriously than Netanyahu and his predecessors have taken the various Security Council resolutions that direct Israel to permit Palestinians to return to the homes from which it drove them or to withdraw from the Palestinian lands it has seized and settled. Like Israel’s wars with the Arabs, America’s war with Iraq went into remission but never ended. In due course, it resumed.

The United States needs to get into the habit of developing and implementing war termination strategies.

Blunder number two was the sudden abandonment in 1993 of the strategy of maintaining peace in the Persian Gulf through a balance of power. With no prior notice or explanation, the Clinton administration replaced this longstanding approach with “dual containment” of both Iraq and Iran. For decades, offshore balancing had permitted the United States to sustain stability without stationing forces other than a very small naval contingent in the Gulf. When the regional balance of power was undone by the Iran-Iraq War, Washington intervened to restore it, emphasizing that once Kuwait had been liberated and Iraq cut back down to size, U.S. forces would depart.

The new policy of “dual containment” created a requirement for the permanent deployment of a large U.S. air and ground force in Saudi Arabia, Kuwait and Qatar as well as an expanded naval presence in Bahrain and the United Arab Emirates. The political and socioeconomic irritants this requirement produced led directly to the founding of Al Qaeda and the 9/11 attacks on New York and Washington. “Dual containment” was plausible as a defense of Israel against its two most potent regional adversaries, Iran and Iraq. But it made no sense at all in terms of stabilizing the Gulf.

By writing off Iraq as a balancer of Iran, dual containment also paved the way for the 2003 American experiment with regime removal in Baghdad. This rash action on the part of the United States led to the de facto realignment of Iraq with Iran, the destabilization and partition of Iraq, the destabilization and partition of Syria, the avalanche of refugees now threatening to unhinge the EU, and the rise of the so-called Islamic State or Daesh. With Iraq having fallen into the Iranian sphere of influence, there is no apparent way to return to offshore balancing. The United States is stuck in the Gulf. The political irritations this generates ensure that some in the region will continue to seek to attack the U.S. homeland or, failing that, Americans overseas.

The United States needs to find an alternative to the permanent garrisoning of the Gulf.

Blunder number three was the unthinking transformation in December 2001 of what had been a punitive expedition in Afghanistan into a long-term pacification campaign that soon became a NATO operation. The objectives of the NATO campaign have never been clear but appear to center on guaranteeing that there will no Islamist government in Kabul. The engagement of European as well as American forces in this vague mission has had the unintended effect of turning the so-called “global war on terrorism” into what appears to many Muslims to be a Western global crusade against Islam and its followers. Afghanistan remains decidedly unpacified and is becoming more, not less, Islamist.

The United States needs to find ways to restore conspicuous cooperation with the world’s Muslims.

Blunder number four was the inauguration on February 4, 2002—also in Afghanistan—of a campaign using missiles fired from drones to assassinate presumed opponents. This turn toward robotic warfare has evolved into a program of serial massacres from the air in a widening area of West Asia and northern Africa. It is a major factor in the metastasis of anti-Western terrorism with global reach.

What had been a U.S. problem with a few Islamist exiles resident in Afghanistan and Sudan is now a worldwide phenomenon. The terrorist movements U.S. interventions have spawned now have safe havens not just in Afghanistan, but in the now failed states of Iraq and Syria, as well as Chad, Lebanon, Libya, Mali, Niger, Nigeria, Pakistan, the Sinai, Somalia and Yemen. They also have a growing following among European Muslims and a toehold among Muslim Americans. We have flunked the test suggested by the Yoda of the Pax Americana, Donald Rumsfeld. We are creating more terrorists than we are killing.

The United States needs a strategy that does not continuously reinforce blowback.

Blunder number five was the aid to Iran implicit in the unprovoked invasion of Iraq on March 20, 2003. This rearranged the region to the severe strategic disadvantage of traditional U.S. strategic partners like Israel and Saudi Arabia by helping to create an Iranian sphere of influence that includes much of Iraq, Syria and Lebanon. It showed the United States to be militarily mighty but geopolitically naive and strategically incompetent. Rather than underscoring American military power, it devalued it. The U.S. invasion of Iraq also set off a sectarian struggle that continues to spread around the globe among the Muslim fourth of humanity. The U.S. occupation culminated in a “surge” of forces that entrenched a pro-Iranian regime in Baghdad and that only its authors consider a victory.

The United States needs to deal with the reality and the challenges to others in the region of the Iranian sphere of influence it helped create.

Blunder number six has been to confuse the motives for terrorism with the religious rationalizations its perpetrators concoct to justify its immorality. Many of those who seek revenge for perceived injustices and humiliations at the hands of the West and Western-backed regimes in the Middle East, or who are treated as aliens in their own countries in Europe, give voice to their anger in the language of Islam. But their political grievances, not heretical Islamic excuses for the mass murders they carry out, are what drive their attempts at reprisal. Islamism is a symptom of Arab anguish and rage. It is a consequence, not a cause, of Muslim anger.