What America Needs to Learn from the Six-Day War 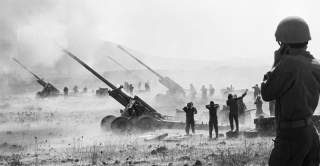 In June 1967 there was at first impression a clear picture on the ground in the Middle East after six days of war: Israel had taken possession of large swaths of Jordanian, Syrian and Egyptian territory; Israeli tourists were crossing the border into previously off-limit Palestinian neighborhoods; Egyptian soldiers, some barefoot, were running in retreat through the Sinai desert to get across the Suez Canal; the scattered remnants of Egypt’s artillery and tanks littered a desert landscape that for three tense weeks had housed the operations of the most powerful Arab military in the modern world.

A possible resolution of the Arab-Israeli conflict, one that could be brokered by the United States, appeared in the offing: Egyptian leader Gamal Abdel Nasser was on state television announcing his abdication of power due to a spectacular defeat by Israel; President Lyndon B. Johnson announced that Israel was, for the first time ever, in a powerful position to bargain for its security and to establish an unprecedented peaceful coexistence with its regional neighbors; while the Soviet representative to the United Nations looked foolish telling the security council that Israel had acted like Hitler and committed an illegal war to expand its national territory.

These were the scenes of the day. But if there was anything more surprising than Israel’s quick routing of the Arab armies from all three sides of its borders in only six days, it was the throngs of Egyptians crowding the streets and crying for Nasser to retain his position at the helm of Egypt—even though enemy Israeli soldiers had gathered at the edge of Egypt’s legendary Suez Canal.

Indeed, the Arab dictator, notwithstanding that he oversaw one of the greatest catastrophes to befall the Arab nationalist movement, was still seen as the best chance to protect the Arab heartland from further Western incursion. To be sure, in the eyes of the Arabs, Israel had delivered a setback to longtime plans for the liberation of Palestine, but the Jewish state could never be allowed to win the larger struggle.

The Lyndon B. Johnson administration had painstakingly avoided taking Israel’s side during the three-week crisis leading up to the war. Some officials even saw it as America’s duty to take both sides and prevent war. Secretary of State Dean Rusk sent out a circular memo to all U.S. ambassadors in the Middle East, declaring, “We cannot throw up our hands and say that, in that event, let them fight while we try to remain neutral.”

Beginning with the Kennedy administration in 1961, the United States had given massive amounts of economic aid to Egypt in order to turn Nasser inward—and away from Moscow. To walk away from all that in support of Israel seemed reckless to Johnson’s officials. Not surprising, after the war, Israeli prime minister Levi Eshkol was frustrated with the Johnson administration. He said they promised “great things” to protect Israel in the face of a growing Arab encirclement from May 14 to June 4, but the expected support never materialized.

Instead, the Johnson administration focused its efforts on how to stave off war and keep both sides content with the United States. The only problem was, Nasser was running things on the ground. And he had no intention of rewarding the United States for its diplomatic efforts.

Indeed, it was only a few days previous to Nasser’s bogus “resignation” that acts of destruction in a little noticed sideshow to the Six-Day War quietly unfolded across the Middle East, which was representative of the dictator’s sweeping influence over the region. A majority of the American consulates and embassies in the Middle East were sacked. Nasser had labeled the United States as a co-conspirator with Israel because of its refusal to choose a side. Neutrality had backfired.

This simultaneous destruction of American diplomatic property in such a short timespan was—and still is—unprecedented. More interesting is the fact that the extent of this event has gone unmentioned in history books about the war.

The American consulates in Port Said and Alexandria were attacked by mobs, with the staff of the latter being forced to seek refuge in a locked vault. A similar scenario occurred at the embassy in Benghazi, where staff resorted to using tear gas in order to keep the mob at bay and from reaching the vault. The mission in Aleppo fared no better. The staff reportedly slid down a rope to escape a fire that eventually consumed the entire building. Likewise, American and British workers were forced to evacuate an oil refinery in Banyas. In Baghdad, the American library was ransacked. And in Basra, the empty mission compound was broken into and subsequently damaged by a mob.

That such hostility translated into attacks against the American missions is hardly surprising in light of Nasser's hostility towards America in the run-up to the war. Local newspaper reports of “British-American-Israeli” collusion did little to quell an already stirred up population from lashing out at the nearest symbols of “American imperialism.” It was the opinion of American officials that the relative ease at which Egyptian soldiers decisively maintained their security posts outside of the American embassy in Cairo suggested that high-level orders were issued for the sackings at the other missions. Indeed, it was also the opinion of the American ambassador to Cairo that a controlled fire at the Alexandria consulate had been orchestrated by the Egyptian authorities themselves.

At the end of the Six-Day War, Nasser remained defiant against the United States. He formally broke off diplomatic relations, and invited Soviet military advisors into Egypt. It didn’t matter that the United States had kept his regime afloat for the better part of the 1960s while he spent Egypt’s dwindling cash reserves on a disastrous expedition in Yemen—dubbed “Nasser’s Vietnam.”

These competing snapshots of Nasser, a humbled leader in defeat versus an ambitious tyrant lashing out at an international power, demonstrate the limited capabilities of superpower nations like the United States. Though they may have unmatched military, economic and political strength, local leaders like Nasser can wreak havoc.

Foreign policy is a goal. Strategy is the way to achieve that goal. But sometimes this means nothing in the international arena. Superpower nations beware: local strongmen may trample at will.

Gabriel Glickman holds a Ph.D. in Middle Eastern Studies from King’s College London. He is currently working on a book provisionally titled Western Historiography of the Six-Day War: Rethinking the Road to War.