What America Wants from Iran Can't Be Achieved by Regime Change 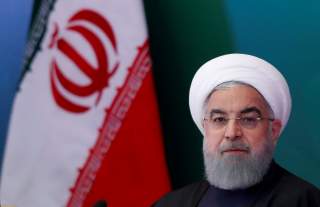 Now that the United States is "done" with North Korea, it is time to return to the question of what American policy toward Iran should be. So far all the United States has done is walk away from the agreement limiting Iran's nuclear program and sought to reimpose the sanctions. The question of what America wants, and above all, how it might get what it is after, still needs to be worked out.

When I write that America is "done" for now with North Korea, I, of course, do not mean that North Korea is no longer a nuclear threat, as the President held at one point. I mean that it is easy to see that both sides have created a PR cow they will keep milking for many months to come. Both Kim Jong Un and Donald Trump can keep claiming that the Singapore agreement is a major foreign-policy achievement and keep making minor concessions to each other, to sustain the belief that they are on the way to a denuclearized Korean Peninsula. For Kim, there is no better way to protect his nuclear force than to keep talking about dismantling it. As for Trump, he will continue to win points for seeking a peaceful resolution, as long as it does not become too clear that North Korea has no intention of giving up its nukes. In my judgment, this "milking" will continue for quite a while and therefore, in effect, frees the United States to focus on Iran.

Unfortunately, a familiar bad idea is again raising its ugly head. Major U.S. administration figures are calling for regime change rather than behavior change. National Security Advisor John Bolton said, before his appointment, that "Our goal should be regime change in Iran." While it is true that Bolton mentioned the Libya option favorably he was talking about North Korea, Tehran surely heard that statement he made. Furthermore, Rudy Giuliani told the Iran Freedom Convention for Democracy and Human Rights that “We have a president who is as committed to regime change as we are.” Also before he assumed his current position, Pompeo wrote that “Congress must act to change Iranian behavior, and, ultimately, the Iranian regime.”

Such calls make negotiations that could lead to significant behavior change much more difficult because they call for removing the party America must negotiate with, the party in power. One reason the war in Syria dragged on for so many years is that the United States insisted, as a precondition for any negotiations with Syria, that Assad must go.

There are two ideas about the way America may change the regime in Iran. One is the way the United States changed it in Afghanistan and Iraq, by military invasion. Given the enormous human and economic costs of these regime changes and their less than favorable results, any notion of another land war in Asia is a common conversation stopper. Indeed, many mavens add that Iran is a much harder nut to crack than were the regimes of Saddam Hussein and the Taliban when America toppled them.

The other way is to rely on various groups in Iran—or the “people”—to overthrow the regime. Iran is composed of a large number of ethnic groups, several of which have strongly ambivalent feelings about the regime, such as the Kurds. The CIA has been reported to be in touch with leaders of these groups and is seeking to egg them on. Others point to recent, fairly widespread street demonstrations, which lead them to believe that with American encouragement these demonstrations could lead to an Arab spring moment in Iran. “The essential theme in modern Iranian history is a populace seeking to emancipate itself from tyranny—monarchal and Islamist,” wrote Reuel Marc Gerecht and Ray Takeyh. “Devising a strategy to collapse the clerical regime isn’t difficult.”

The "street" did overthrow the governments of Tunisia and Egypt. However, Iran is much more effective in controlling its citizens. Its success is based on permitting some expressions of objection to government policies and granting reformers some power by making limited reforms. Iran also often looks the other way when young people drink and watch porn—while also using a rather effective secret police to keep control. Those who seek to rely on the people of Iran to change the regime may well have a very long wait. Such a policy is hardly compatible with the fact that if Iran also abandons the current agreement, it could develop nuclear weapons rather quickly. Additionally, Iran continues to increase its meddling in Iraq, Syria, Lebanon, and even Afghanistan.

Moreover, one should not assume that regime change will entail the desired behavior changes. I was the guest of one of these groups that are expected to challenge the regime when I visited Iran in 2002. It soon became clear that while indeed these groups have significant complaints against the regime, and would be willing to overthrow it if they saw a chance that they could succeed—they all were patriotic Iranians. They made it clear that they hate the U.S. (and above all, for some historical reasons, Britain) more than the mullahs. And if they came to power, they would maintain the nuclear program. Indeed, they reminded me that it was the reformers that started the military nuclear program when they were in control.

On the other hand, the current regime has shown itself to be very keen to negotiate denuclearization—when faced with military threats. The time was mid-2003, a point at which the United States demonstrated its military might by quickly disposing of Saddam's army in weeks, and with few casualties—a feat Iran could not accomplish after fighting him for eight years. The fact that the Bush administration openly listed Iran as one of the three members of the Axis of Evil and otherwise indicated that it could be subject to military attacks alarmed Tehran.

In May 2003, Iran sent the U.S. government a proposal that called for a comprehensive dialogue between the two countries that would address Iran’s nuclear program. Several observers considered this proposal to be the blueprint for a “grand bargain.” Flynt Leverett, former Middle East director for the National Security Council, compared it to the diplomatic communications between Beijing and the Washington that paved the way for the opening of relations with China during the Nixon administration. New York Times columnist Nicholas Kristof called the document “astonishing” and said it offered “a real hope for peace.” But the Bush administration rejected the proposal—because it sought regime change.

In short, leaders in Washington may turn awfully blue if they hold their breath until the people of Iran will overthrow the regime and—if they do—there is little reason to believe the new government will abandon the military nuclear project. In contrast, the record suggests that a combination of military and diplomatic pressure may work, as long as it seeks only behavior and not regime change.

Amitai Etzioni is a University Professor and Professor of International Relations at The George Washington University. He is the author of Foreign Policy: Thinking Outside the Box.