What Americans Should Do on Memorial Day 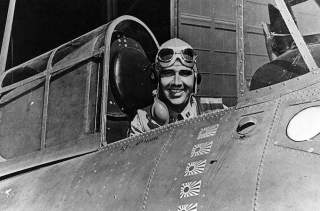 This Memorial Day put aside the politics and the shopping sprees. This day is about remembering one thing and one thing only: those who gave their lives in the service of their fellow Americans.

That’s actually a lot to take in. So many wars. So many causes. So many lives. It’s impossible to remember them all. But for those looking for a place to start, here’s one you can remember, even if you’ve never heard of him.

We’ve all heard of O’Hare, the nation’s busiest airport, site of some one million take-offs and landings every year. About eighty-three million passengers pass through its gates each year. Yet if you were to ask them where the name came from, few would have the slightest clue.

But Butch O’Hare was someone worth remembering—especially on Memorial Day.

Let’s go back to February 20, 1942. On that date, Japanese pilots were chasing down the USS aircraft carrier Lexington and Task Force 11.

In World War II, a carrier task force had two means to defend against enemy attack planes: its anti-aircraft guns on deck and a CAP on top (a combat air patrol of fighters from its flight deck).

That day in February, the Lexington’s CAP circled the air above the task force, scanning for the Japanese or waiting for radar to spot incoming enemy aircraft and vector the fighters to intercept them before the attacking planes reached the task force.

When the first wave of Japanese planes approached, the combined defenses of Task Force 11 annihilated it. Not one of the enemy medium bombers reached the Lexington.

But after fending off the attack, most of the CAP, low on fuel, returned to the carrier.

Shortly after the planes settled on deck, the radar screens lit up. Another wave of medium bombers approached the fleet.

What followed became one of the most oft-told and morale-boosting accounts of skill and heroism in the history of combat aviation in World War II. America, shamed and angered after the sneak attack on Hawaii, was desperately looking for heroes, and this moment of war became an important symbol of hope and an act of righteous retribution.

In the blue skies of a late afternoon melting into the deep blue waters of the Coral Sea, only two U.S. interceptors were still circling over Task Force 11. One was piloted by Butch O’Hare.

After Pearl Harbor, Lt. Edward Henry “Butch” O’Hare had been assigned to the Saratoga, but when the ship was shelved for repairs he was shipped to the Lexington. At 5 p.m., O’Hare and his wingman, Lt. Marion W. “Duff” Dufilho, were the only airborne defense between the enemy bombers and “Lady Lex.” And Dufilho’s guns weren’t working.

That left just one pilot to defend the roughly three thousand men aboard Lady Lex.

More bad news: normally O’Hare would take his plane’s four .50-inch (12.7 millimeter) machine guns into combat with 450 rounds of ammo for each. That gave him a firing time of thirty-four seconds. But when the second wave appeared, O’Hare’s ammunition boxes had only about twenty seconds-worth of ammo left.

Moreover, O’Hare wasn’t going after defenseless bombers. While the Japanese planes had no fighter escorts, they themselves were well-armed. The twin-engine Mitsubishi G4M Navy Type 1 Attack Bomber had four machine guns placed in the nose, dorsal turret and waist gun positions and two twenty-millimeter cannons installed in the tail.

“There wasn’t time to sit and wait for help,” O’Hare later recalled. “Those babies were coming on fast and had to be stopped.”

He fought off the entire wave of Japanese planes by himself.

Up to the Battle of the Coral Sea (May 4-8, 1942), U.S. Naval air forces in the Pacific downed a total of twenty-four planes. One-quarter of those were shot down by one pilot: Butch O’Hare.

He received the Medal of Honor from the president at the White House, a parade in St Louis, and a hero’s welcome in Chicago. O’Hare was everything a nation hungry for heroes and victories could ask for.

But there is more to his story.

The United States suffered more than four hundred thousand military deaths during World War II. Everyone knew someone who received a fateful telegram or had a neighbor with a gold star flag hanging in the window.

One of those people with a flag in their window was Rita O’Hare.

Her husband, air-ace Butch O’Hare, had come home to a hero’s welcome. He got to see his newborn daughter, Kathleen. But when the parades were done, O’Hare requested and was granted permission to go back to war in the South Pacific. He was killed in action on November 26, 1943.

He is buried in Honolulu, Hawaii. You can visit him there.

Chicago named their airport in his honor. There is a restored Wildcat hanging in the west end of Terminal 2 behind the security checkpoint. You can see it on your way to catch your flight.

The rest of us can just remember. And thank God for people like Butch O’Hare. And pray for every family and friend who lost a loved one who fought to keep us free.

Remember one. Remember them all.

James Jay Carafano is a Heritage Foundation vice president and he directs the think tank’s research into issues of national security and foreign relations.