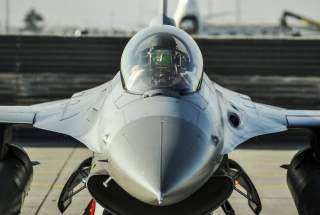 A central tenet of U.S. national strategy since the beginning of the Cold War has been the maintenance of technological military superiority over our adversaries. Indeed, since our extensive use of precision strike capabilities, stealth aircraft and other innovations during Operation Desert Storm in 1991, there has been a broad consensus that the United States has an overwhelming dominance in conventional warfare, causing our adversaries to resort to asymmetric and irregular warfare.

Since 2014, however, the Obama administration has signaled, through public statements and the Department of Defense’s initiation of the Defense Innovation Initiative (DII), that the United States’ “overmatch” is threatened, and the long-standing U.S. military supremacy in high-intensity conventional warfare is eroding. Therefore, the objective of the DII is to identify and develop what has been called a “Third Offset,” a set of game-changing technologies that will restore or sustain our military dominance for the future.

Since DII’s inauguration, DoD has elaborated on the the “Third Offset” and announced a wide range of activities to support its goal of sustaining and advancing the American military’s “unfair competitive advantage.” After months of effort, DoD’s leaders recently identified autonomy and artificial intelligence technologies as the core elements of what they believe our new overmatch will be.

The Third Offset thus is off and flying in the defense world; signals from senior DoD leaders have been received throughout the Pentagon and in the defense industry. The Third Offset, somewhat like “defense transformation” and the “revolution in military affairs” before it, is now central to the defense ecosystem—in the policy community, from government to think tanks to academia, the armed services, the research and development and acquisition communities, industry, and Congress. And, to a fair degree, the Third Offset has been accepted at face value without much debate.

But before the Third Offset flies too far, we need to ask the critical question: whether we are soaring in the right direction. Or, are we, like Icarus, on the wrong flight path, flying too close to the sun, apparently out of hubris?

Undoubtedly, the “Third Offset” is a useful tool to focus on the need for innovation to ensure future national security. It has encouraged critical thinking and experimentation with not only new technologies, but a combination of new operational and organizational concepts for applying them. As DoD has rightly recognized, successful innovation is not merely about technology, but the ability to effectively utilize that technology in modern warfare, from doctrine to organization to operations to tactics and training. The administration should be applauded for this effort and the change process it has generated; the Defense Department is a large, conservative and sometimes risk-averse organization to which change often comes slowly.

However, a series of fundamental questions needs to be addressed by the next administration as it seeks to shape future military forces so as to sustain our qualitative edge and the deterrence it fosters:

• First, is the United States’ qualitative military edge over its adversaries really eroding?

• Second, is the notion of an offset, or disruptive game changer, that conveys a sustained qualitative edge a realistic construct given the nature of warfare and innovation?

• Third, is Russia really an actual or near “great power,” that warrants serious consideration in shaping our force of the future?

• Fourth, are autonomy and artificial intelligence, the technologies on which the identified future offset is founded, what we should build around and what will afford the United States a sustained advantage?

• Finally, is the direction in which the “offset strategy” is shifting the Pentagon’s focus—away from irregular wars and toward “big power” conflict—the right one in light of the likely threats we will face in the future?

The next administration needs to consider these issues as it decides whether to terminate, change the trajectory of or keep on course the flight of the Third Offset. Under the offset rubric or another approach, the United States needs to develop a properly balanced strategy and supporting defense investments that examines future threats and determines the proper mix of capabilities for the future force.

I. Is the Core Assumption Correct: Is U.S. Military Dominance Eroding?

In a 2014 kickoff speech at National Defense University, Deputy Secretary of Defense Robert Work identified the “First Offset” as the development of a large and robust U.S. nuclear arsenal during the 1950s. This U.S. nuclear advantage then receded, as the Soviet Union developed a full panoply of nuclear weapons (and chose not to compete in nuclear weapons by adopting a strategy of mutually assured destruction).

The so-called “Second Offset,” based on advanced microelectronics and information technology developed during the 1970s and 1980s, resulted in a generation of smart weapons linked to networked sensors targeting systems and command-and-control systems. The U.S. advantage in conventional forces derived from the Second Offset, and the deterrence it generates, has been sustained for a generation.

Thus, the threshold question is whether the core underlying assumption of the DII is correct—namely, that the United States’ military superiority, based on our dominance in precision weaponry and related capabilities, is now eroding.

While senior defense leaders did not explicitly claim this when unveiling the initiative in 2014, their statements over time increasingly stressed this point. While the formulations have varied somewhat, from claiming that our margin of technological superiority “is eroding” to saying it is “at near-term risk” to, as Deputy Secretary Work recently put it, “slowly eroding,” the underlying message is the same. Whether the United States’ military superiority in fact has eroded or is eroding is a question that can only be evaluated carefully across the broad spectrum of capability areas and realistic threat scenarios.

The DoD conclusion appears to be based largely on concerns that Russia and China have made significant investments in select areas, apparently enhancing their capabilities to challenge U.S. dominance in these areas. Both seem to be focusing in particular on a range of “anti-access” and “area denial” capabilities to prevent the United States from intervening in specific parts of the world, or at least, to make such intervention prohibitively expensive. Recent provocations by both Russia and China undoubtedly reinforce this view.

As Deputy Secretary Work observed, other nations have studied U.S. technological superiority and “set about devising ways to compete. Today, many of these earlier innovations. . . have proliferated widely” and have become available to our adversaries. Russia and China, he recently stated, have invested considerably to achieve “rough guided munitions parity with the United States.”

Other areas of investment by potential adversaries have included cyber and electronic warfare, including jamming or disruption of the Global Positioning System (GPS), on which the United States relies for navigation, precision weapons guidance and even communications.

But many of the anti-access capabilities being fielded by our potential adversaries that are now attracting attention are not new, but were developed in the Cold War. The Soviet Union deployed antiship ballistic missiles, cruise missiles and antisatellite systems in much larger numbers in the 1980s, and the United States developed countermeasures for each. But, with the end of the Cold War, the United States retired many of our very capable Cold War systems designed to address these anti-access threats (e.g., the F-14 Tomcat, the S-3 Viking carrier-based antisubmarine warfare aircraft, and Aegis cruisers) and, in effect, let those capabilities atrophy as the threat receded. Addressing these challenges is less about greater technological innovation and more about restoring capabilities that the United States once had, either through the development of new systems, or, potentially, by returning older systems to service (e.g., with line restarts where it is cost-effective).

Overall, while there may be select areas where our margin has been reduced, it is difficult to find a strong basis to assume an across the board erosion of U.S. military superiority. In core conventional capabilities—from fighter aircraft and unmanned aerial vehicles, to naval power projection, to ground systems, to our major intelligence, reconnaissance and reconnaissance systems—the United States still holds a considerable lead in technology, quantity and the ability to effectively integrate these capabilities into our forces. While there has been talk of new advanced development programs in these areas by our adversaries, there has been little demonstrable action in terms of new fielded systems. Beyond prototypes displayed at air shows, there is no evidence that either Russia or China have really built and deployed a fifth-generation fighter jet on par with the F-22 or F-35.

U.S. dominance in electronic capabilities and net-centric warfare, including precision strike (the so-called second offset) also remains significant due to the complexity of the enabling technologies to field these capabilities and the cost of acquiring and maintaining them in sufficient numbers to make a difference in sustained conflict. It is one thing for an adversary to copy a laser-guided bomb or JDAM, but another thing entirely to produce them in large quantities and integrate them with advanced C4ISR systems (command, control, communications, computers, intelligence, surveillance and reconnaissance) to create an effective precision strike system. Not surprisingly, there is little evidence that other countries have developed such seamless capabilities in any quantities to date.